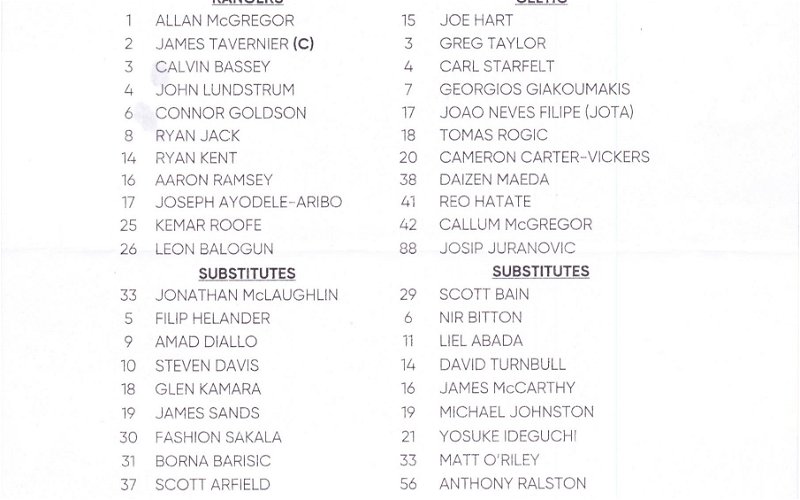 As the fixtures fell into place the month of April was always going to be season defining for Rangers. Kicking off with the visit of Celtic to Ibrox in the league, a Scottish Cup Semi-Final also against Celtic, a Europa League quarter final against Braga and three further league fixtures (which could quite possibly include another fixture against Celtic!) there was never going to be anywhere for Rangers to hide during the month of April.

Following the defeat to Celtic on Sunday, Rangers now lie six points behind the league leaders. Although the league title will not be conceded it is clear the two knockout competitions that Rangers remain in have become the most realistic paths to claiming silverware this season. Before Sunday’s defeat to Celtic there was a sense of optimism around Ibrox as Rangers looked forward to challenging for trophies on three fronts. That optimism has now turned to pressure as Rangers try to ensure that the month of April does not deliver three knockout blows to their season.

They do not have time to dwell on the defeat to Celtic, nor hide away and lick their wounds. Their Europa League quarter final 1st Leg takes place in Portugal on Thursday and whilst victory on Sunday would have of course given Rangers a massive boost, it is important that they do not allow the defeat to impact on them negatively. The side have flourished in the Europa League this season, defeating German giants Borussia Dortmund and the Serbian powerhouse Red Star Belgrade, and defeating Braga themselves just two years ago. Defeat on Sunday should not change how the side should approach Thursday’s game and they can and should go into the tie confident of progressing to the semi-finals of the competition.

Progression to the semi-finals of the Europa League would be an enormous achievement, and would for many represent success for the club in Europe. But whilst the Europa League continues to give the club and the fans precious memories of glorious European nights, success at Rangers is ultimately about winning trophies. The Scottish Cup gives Rangers an opportunity to get their hands on a trophy and the game against Celtic in the middle of the month, 3 days after the 2nd leg of the Braga tie, is arguably the most important game in the whole month of April.  Defeating Celtic in the semi-final would see Rangers play either Hibs or Hearts in the final – with neither holding any fear for Rangers in their quest to lift the famous old trophy. Failure to reach the final could leave the door open for a potential treble for Celtic, and would leave the club and the fans with an enormous amount of soul searching following the success of the clubs 55th league title last season.

As the month progresses there is no doubt that the role of Giovanni van Bronckhorst will come under scrutiny. Further progression in the two knockout competitions will enhance his reputation amongst the Rangers fanbase but defeat in either, or both, will intensify the pressure on the Rangers manager.  Van Bronckhorst has been in charge of a Rangers side that has gone from being 6 points clear of Celtic to 6 points behind. Indeed in 2022 Rangers have won only 50% of their league games – a statistic that highlights the Jekyll and Hyde characteristics of this side, given their success in the Europa League during the same period.

There has been evidence building for a number of months that the Rangers team, indeed the squad, needs to be rebuilt. Further progression in the Europa League and a Scottish cup success will ensure that Van Bronckhorst has enough credit in the bank to be given the Summer to carry out said rebuild and mould his own side. Failure to achieve either of the above objectives will mean that, an indifferent start to season 2022/2023 would see the pressure intensify on the manager very quickly.