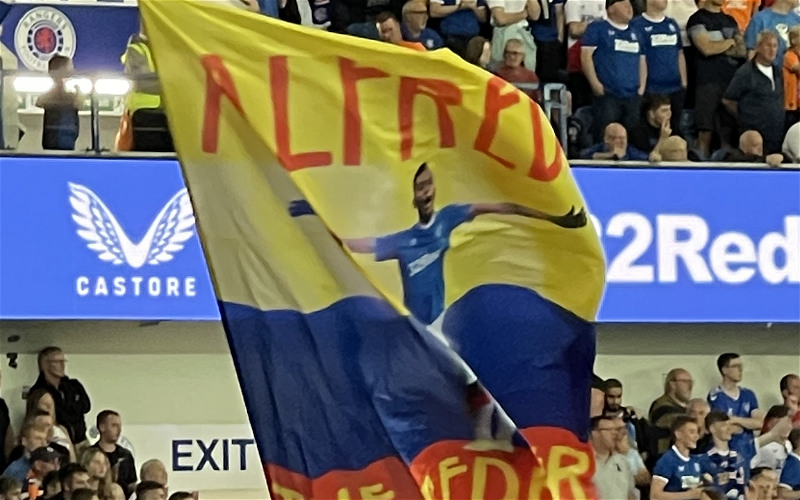 On a glorious summer evening Rangers blasted three goals past Belgian side Union Saint-Gilloise to overturn a two-nil deficit from the 1st leg of the tie and secure last season’s Europa League Finalists a place in the Champions League Play Off Round. The club now stand just two games away from the lucrative group stage of Europe’s premier competition.

In his pre-match interview Giovanni Van Bronckhorst had stated “The overall performance needs to be better…We need a big performance and big players.” Rangers had lost two nil in the first leg in Belgium a week ago in what had been an insipid and uncharacteristic European performance and Van Bronckhurst was under no illusion that his team needed to perform to a much higher standard in the return leg.

The performance from Rangers in the 2nd leg of the tie was unrecognisable from the previous week with goals from Tavernier, Colak and Tillman seeing Rangers overturn a 1st leg two nil deficit for the first time in the club’s history. In his post-match press conference Van Bronckhurst spoke of his pride in his players and their ability to once again deliver on the European stage for the club,

“…we needed a big performance, the pressure was on us because of the defeat last week. We know we are capable of delivering big nights for the club, but still, you have to do it over and over again. That’s why I’m so proud of my players, the way that they played, with passion, with desire to go to the next round.

He also spoke about one of the big players who had produced a big performance. John Lundstram who was a key member of the team during the run to the Europa League Final run last season, marshalled the Rangers midfield all evening.

“we knew the midfield would be an important part of the game, with the players they had, in particular their captain, the play started with him always…we wanted to have the midfield domination…John was really important to keep the pressure on them, to ensure the balance was good in the team. We know the fire he has in these moments.”

After being on the wrong end of a poor refereeing decision last week when USG were awarded a penalty for a very dubious handball, Van Bronckhurst indicated he was happier with the referee’s decisions in the return leg, in particular when it looked momentarily like Rangers defender James Sands would be sent off.

Following a poor pass to Sands from Goalkeeper McLaughlin, Sands stretched to make a tackle, cleanly winning the ball. The referee rushed over and looked to take out a yellow card, which would have been Sands’ second and therefore would have seen the American sent off. However, following consultation with his Assistant Referee the Greek referee changed his mind. Van Bronckhurst commented,

“There was one moment in the second half, with James Sands, where I felt this could be a very important moment for the game. It was good for us that he didn’t give the yellow card.”

Following their defeat of Monaco, PSV Eindhoven now stand between Rangers and the Champions League Group stage and the Dutch side are littered with familiar faces for the Rangers manager. He looks forward to meeting up with fellow countryman and PSV manager Ruud Van Nistleroy and also “getting to spend a couple of days in Holland!”

However, despite the familiarity and friendship that the tie against PSV will offer Van Bronckhurst this is, yet again, another enormous European tie for Rangers. The prize this time is a seat at Europe’s top table and all the riches that adorn it. Whilst Rangers run to the Europa League final last year generated a sizeable amount of income, and perhaps more than had been budgeted for, the money available in the Champions League is on another level.

But it is not just about the money, there is of course the prestige of the competition itself. Glamour ties against Real Madrid, Bayern Munich, PSG and the Champions League anthem echoing around Ibrox once more. For a generation of fans, the Champions League has been a tournament that other teams competed in. Van Bronckhurst and his squad have an opportunity to change that and prove that Rangers can once again compete with Europe’s Elite.