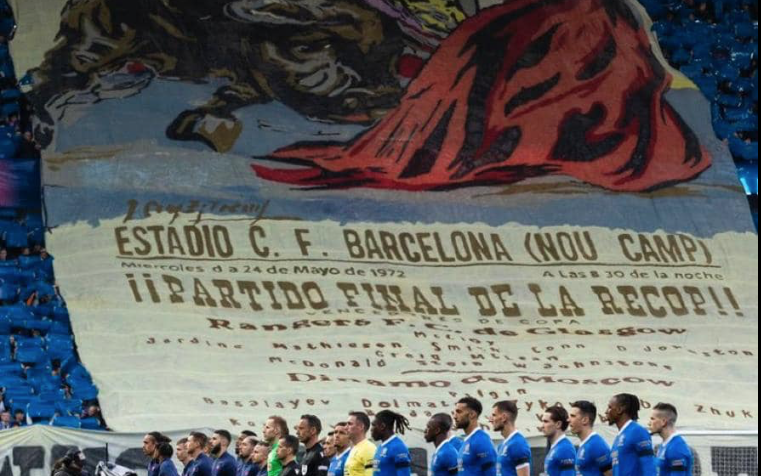 By The Govanhill Gub

Oh, we’re a way of life no doubt. We soar when we’re doing well and we nosedive when we hit the skids. Which makes this season a never ending ‘go’ on the trampolines. As we have started, stuttered and spluttered domestically, and the warning signs were there from Matchday #2, the lows have tempered and derailed any semblance of highs there may have been.

The malaise even hit us in European competition(s). The debacle that was the second half v Malmo at home, and against ten men at that. Then defeats in the first two group ties in the Europa league. Yet here we are looking at the same group of players standing on the edge of immortality by giving us the chance to win the Europa League in our 150th Anniversary year.

In many ways as this season has unravelled and played out the parallels for me in some ways has been 1978/79. A season when we made Europe sit up and wonder what the hell was going on at Ibrox but at the same time we were forever blowing it at home.

Nothing epitomised the Jekyll and Hyde character of that team more than in October 1978. We travel to Eindhoven for the European Cup second leg after aa 0-0 draw at Ibrox. We’re a goal down after a couple of minutes yet proceeded to inflict PSV’s first ever home defeat in Europe in something like 23 ties, yet lose at Firhill three days later?

As those of us of a certain vintage will tell you, that season, which promised so much ended in disaster. So close, but ended up as a signpost to a place called mediocrity. A place we would dwell for seven, long, hellish years.

So, let’s get back up to date. There are four domestic games left. There’s no beating about the bush here, with the filth beating Hearts today we need to look at freshening up the side tomorrow v Dundee Utd at Ibrox. I’d rest a good few players simply to give them a break. Lundstram for instance and Jack certainly with that injury on Thursday in mind. For me young Lowry needs gametime as that boy certainly has what it takes.

As for John Lundstram? Where do we (or I) start? I have no qualms in saying it, he just didn’t do it for me at the start of the season. And I wasn’t swallowing the ‘it takes time to settle’ argument. A British player, battle hardened in promotion fights and scraps and then ultimately fighting for survival in the EPL and then a relegation dog fight, which was ultimately lost the following season.

Nah, in my opinion he should have hit the ground running and no excuses. For me, he could have been off in the January transfer window and I’d have shrugged my shoulders and said so what? Yet here we are a few months down the line and he has to be just about the first outfield pick.

Like others have suggested and I agree totally, when have we ever saw such a transformation in a player in mid-season? You don’t change horses in mid-stream? This guy, who is beginning to look like a thoroughbred has proved we don’t need to.

Getting back to squad rotation and our constant injuries. We need to give Roofe the time to get back to full fitness, so if that means keeping him sharp in training and no more then so be it. After Sunday, there will only be one more league game before the final anyway.

It’s the same with Aaron Ramsay, he must be back to some semblance of full fitness given he was on the bench on Thursday so, what is the point in risking him v Dundee Utd or Hearts? Keeping him topped up at training has to be the only way to go. No offence to Ramsay, class act that he is, but I get the impression that if he walked in a puddle, he’d end up sea-sick. So, wrap him in cotton wool at all costs.

In many ways Thursday night’s epic at Ibrox v Leipzig was bittersweet, as it proved and highlighted just how inconsistent and frankly indifferent, we have been to the job at hand in the league. The tippy-tapping, the slow starts, the ponderous, sideways passing and the lack of focus at all times leading to sloppy goals and points lost have all conspired to gift the filth the title. Yet as I said earlier, here we are with this same squad ready and capable of guiding us to a summer of giddiness the likes of which, we’ve never experienced.

That is not to say I think we have this trophy already in the bag, far from it. There was a feeling from many on the boards when we drew Leipzig that it would be easy. The theory being that we had just beaten Dortmund and they were higher in the league table than Leipzig therefore they would be an easier proposition.

I sincerely hope people keep these bonkers theories to themselves as the next eleven days play out. Now I don’t know if Eintracht have ever won a European trophy, all I know is we owe them one from a certain semi-final 62 years ago.

So, they’ll be as eager to win as us, and although they may be mid table in the Bundesliga, they’ll still have the same or even more resources than we do players wise and that playing squad will be worth many millions more than ours too. This team should not be underestimated by our support. That doesn’t mean we should think of ourselves as inferior in any way.

So, the heat is on and the countdown begins. A great many of the support were of the opinion last season’s title with all the baggage and import that losing would have entailed was our most important title ever. I would say that IF we win this season’s Europa League it would very probably be the most important trophy, we have won in our 150 years, certainly in terms of what it would mean to us financially.

Can we win it? Yes, I think we can and the feeling is so different to Zenit in 2008. They were a class act and we were on our last legs, players wise. And it is amazing to think that in terms of playing resources and injuries, we find ourselves in much the same position this time around sadly.

We can win it, but that will only happen if we are all focussed and don’t let complacency set in. Although the wins over Dortmund, Braga and Leipzig and the manner of these wonderful victories seem to suggest that will assuredly not be the case.

Four lads might once have had a dream. There are many millions more sharing that dream today.