One Down – Rangers v Braga 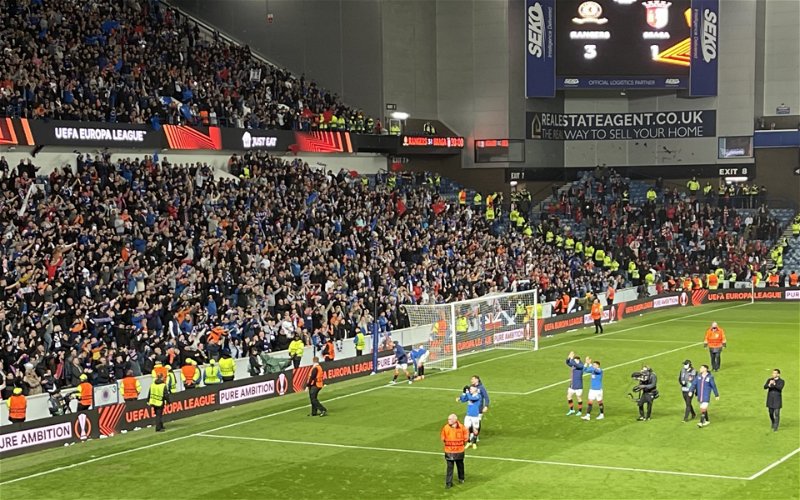 After a week of soul searching and serious questions being asked, Giovanni Van Bronckhorst and his players came up with the answers, as Rangers romped into the Europa League Semi Final tonight at Ibrox.  It took an extra-time, Kemar Roofe goal to get them over the line but, it really shouldn’t have such was their dominance from start to finish in this match.  One momentary lapse in concentration had allowed Braga to level the scores on aggregate in the second half but Rangers, so often accused of lacking mental strength the past weeks rose to the challenge and made the semi-final of a European trophy for the first time since that famous run to Manchester, some 14 years ago.

For a lot of fans this past week has felt a bit like ‘last chance saloon’ for this Rangers team.  Two massive semi-finals in four days, a chance to salvage a faltering season and restore a little bit of pride that had taken a serious dent.  Many have questioned the belief and desire.  Most have speculated about the futures of some players at the end of this season, and a few others have even wondered out loud if Gio is the long-term answer. None of that should be a surprise of course, as we have written many times, it comes with the territory of representing this great Club and doesn’t the manager know it.

‘It’s tough, two games a week for so long this season is a big demand on the players but we don’t want it otherwise, you want to be involved and fighting for every competition. It feels very big and very good at the moment. We started the game really well, lot of pressure up front and created a lot of chances.  It’s a big achievement to get through to the last four and I’m just really proud of my team.’

Van Bronckhorst also took time to praise returning Ranger Borna Barasic along with captain James Tavernier.  The much-maligned left back put in a stellar display, at both ends of the pitch as he showed the sort of form that had the Ibrox crowd in raptures last season and whilst criticism was deserved, after a dramatic downturn in form, it appears a complete write-off may have been premature. Two more than decent performances against St Mirren and Braga in the first leg of this completion saw a starting slot this evening and didn’t he take his chance well?!  As for Tavernier, what else can we say that’s not already been said? Two massive goals, he led by example yet again and on a day where the fans were asked to vote for their Player of the Year, it seems inconceivable that he wouldn’t pick that up, such is the ridiculous consistency he has shown again, particularly against top opposition.

‘You saw it from the players, they gave everything, a lot of energy and lot of power going forward.  I though Borna played an excellent game after a difficult spell.  He came in on Sunday and also last week against Braga and did really well.

With James, he has that drive forward, especially when you need goals.  His energy sends a message first to the crowd but, also to his teammates.  If you just look at how many goals he has scored in Europe, you would think he is an attacker.’

A magnificent night for the Club as Go and his players showed (again) what this group are REALLY capable of and this will rightly go down as one THE great European nights at Ibrox.  Up for it on AND off the field the scramble for a route to Leipzig has already begun, as the fans will travel in enormous numbers for another date with destiny.  For Van Bronckhorst this will be hugely satisfying at the end of a tumultuous 10 days.  Asked if the Rangers fans really can dare to dream, Van Bronckhorst was cautious in his response, as you would expect but, what really stood out from his self-assured, pragmatic response is that Gio isn’t arrogant, he isn’t cocky, he just KNOWS.  He knows how to make this Rangers team tick; he knows the mentality required and above all he knows how to win at the very top level.

‘We are getting closer. I played in a World Cup final, which went to extra-time but, in the end, we lost and ended up with nothing so you have to push hard until you have the prize.  We will enjoy the night but, we need to keep working hard and do everything possible to bring success to the Club.’

If anyone was still in any doubt as to whether we had a winner leading us, they should look no further than this however, for this week at least it’s simply:

One down, one to go!