One For The Collective – Rangers 2 v 0 Brondby 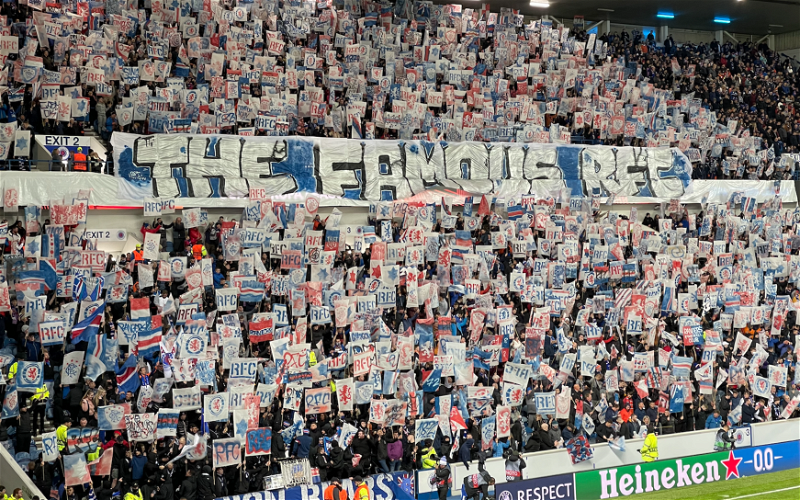 Steven Gerrard had challenged his players to improve at both ends of the pitch, after Saturday’s disappointing draw with Hearts and they didn’t disappoint, as Rangers comprehensively defeated Brondby 2-0 at Ibrox this evening.  In the context of their group, this was a must-win game for the light blues and with Lyon coming from behind to win in Prague, the fight for second place is very much on.  Gerrard had said before the match that 4 points from this double header with the Danes was the target but, after watching his side dominate this game he is now looking for maximum points, as he once again bids to reach the knock-out phase of the Europa League.

‘We deserved the victory tonight, our performance was really strong, both in and out of possession.  In terms of the performance, it’s definitely up there.  We’ve done well for 45 or 60 minutes in other games but we stayed strong and aggressive for the full 90 minutes and this really kick-starts our Europa League journey’

The Rangers manager emphasised the need to praise ‘the collective’ after tonight’s victory and with Rangers killing the game off early and recording a clean sheet in the process, that’s understandable although, it’s difficult NOT to single out performances from the likes of Ianis Hagi and Joe Aribo.  Aribo was given the ultimate accolade last week after the Great Dane himself, Brian Laudrup declared him ‘the most exciting player at Rangers’ and it’s easy to see why.  A quite sensational display, particularly in the first half from Aribo had the very healthy 46000+ crowd on their feet several times and it was his fantastic delivery that led to Rangers second goal, Kemar Roofe bundling home from Alfredo Morelos’ header that was parried at point blank range from the Danes stand-in ‘keeper.

‘I thought Joe really flexed his muscles tonight, he played ‘angry’ but, in a really good way.  Naturally he tired in the second half but that’s to be expected considering what he had put into the game.  There we lots of positives and a lot of praise for individuals but I’m always more interested in the collective’

Aribo is one that has been the subject of constant debate amongst supporters, since joining the club, mainly due to his versatility in being able to operate at an extremely high level both in midfield and further up the pitch however, if recent performances are anything to go by, it’s a debate that has surely been settled once and for all? It’s no coincidence that Aribo is back to his most dangerous best, just as the tireless John Lundstrum appears to have really found his feet and grown into the Rangers jersey.  With Lundstrum dictating and picking up scraps in deep positions, ably assisted by the ever-classy Steven Davis, Rangers look to be playing with a freedom that we perhaps didn’t see in the early part of the season.

Ianis Hagi, is another who seems to be growing as a Rangers player with each passing game and from initially being in and out of the team or used as an ‘impact’ substitute, Hagi looks very much a regular starter for Steven Gerrard and with another strong performance tonight he certainly seems like someone his manager can rely on.  Having turned just 23, Hagi has a maturity, beyond his years both in how he plays the game on the pitch and the way he conducts himself off it.

‘I think from the first minute you saw the mentality of us tonight’ said Hagi, ‘we knew this was a must win if we want to qualify from the group.  It was a strong performance and consistent for 90 minutes.  Being able to find that level of consistency, after last season has been difficult but, I think any team would struggle to reach that level again.  I’m just happy that I can help the team but, I wouldn’t say I was totally fulfilled.  I’m only 23 and feel like I still have lots to improve on.’

Hagi left the field to a standing ovation and he took the time to thank the supporters, even stopping to offer his match shirt to one lucky young fan.

‘I’ve been in that position myself.  I’m really lucky that my dad played this beautiful sport so I had been in changing rooms growing up and knew what it would mean to young fans being offered a shirt. I feel the fans every day here and will always give 100% (for them) whether that’s in games or training.’

There was a lot of talk of this match really ‘kick-starting’ Rangers European campaign.  In a season where performances have been a little patchy and certainly inconsistent, you do wonder if tonight’s victory could kick-start Rangers season as a whole?  There is a feeling around the club, that Rangers haven’t quite hit the heights they are capable of but, after a week which has seen two very strong performances (albeit with one disappointing result), you do get the feeling that this team are starting to turn a corner and with the two Ryan’s (Kent and Jack) due to return in the coming week, the picture is starting to look a little rosier again.  As has been said on this platform previously, caution should be exercised and it would be foolish to get carried away, after winning a game that Rangers were expected to win however, Steven Gerrard’s players were asked the question at the weekend and tonight they’ve very much came up with the answers.