Preview – Rangers v Aberdeen – No More Bumps in the Road 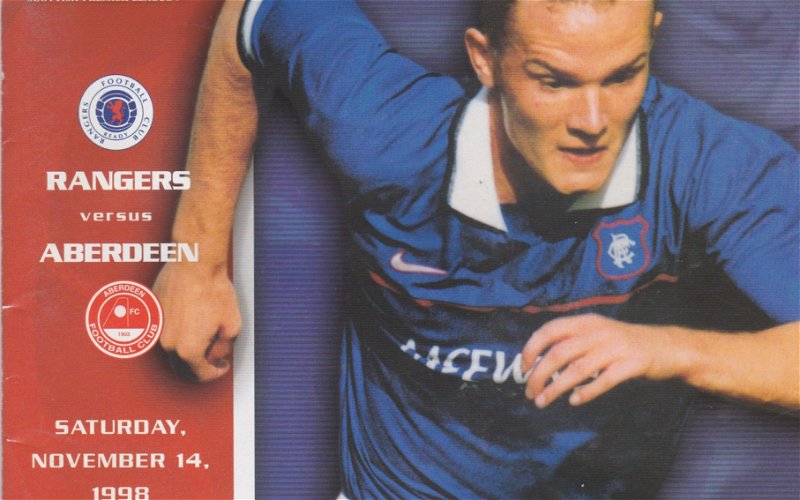 Rangers v Aberdeen – No More Bumps in the Road

Outside the Old Firm, the other principal bitter rivals for Rangers are Aberdeen. Although the origins of the distaste the two sets of supporters have for each other is said to stretch back to the 1960s, it reached fever pitch in the 1980s. Alex Ferguson stoked the fire when he was manager of Aberdeen – he is said to have regularly talked to his players about refereeing bias in the favour of Rangers and Celtic – but what really tipped things over the edge was the brutal challenge on Ian Durrant in a league match at Pittodrie early in season 1988/89.

Durrant was the midfielder of the moment, running games from the middle of park as he effortlessly surged from box to box. He had the world at his feet and had he chosen to leave Rangers, he could have had his pick of the best sides in all the leading leagues in Europe. But his career was brought to a shuddering halt that afternoon. Simpson’s tackle left Durrant with three ruptured knee ligaments (medial, anterior and posterior) and another partially stretched (lateral). Although he came back and starred at Champions League level, that moment robbed him of the opportunities his precocious talent so richly deserved.

Since then, there has always been an undercurrent when Rangers face Aberdeen, but before we look ahead to tomorrow’s game, let’s delve into the archives and see how the teams have fared against each other over the years.

At Ibrox, Rangers have taken full points in 87 of the 145 league matches. In contrast, Aberdeen have only left the Stadium victorious on 25 occasions. That doesn’t tell the full story, though; the Dons having only won twice at Ibrox in the last 30 years. After a 2-0 win in September 1991, it would be May 2017 before their next league win. That amounts to a run of 39 matches, of which Rangers won 30 (76.92%).

There were some memorable victories within that spell. The most notable are probably the 3-1 win in April 1996 when a glorious Gascoigne hat-trick clinched eight-in-a-row, a 5-0 drubbing in January 2000 that featured a fine goal from our current manager, and a Halloween win by the same scoreline in 2004, a matter of days after Aberdeen had beaten Celtic at Parkhead.

It was only really during the period of dominance the Dons enjoyed in the early 1980s that Aberdeen have enjoyed the upper hand in this fixture. Rangers’ form at Pittodrie was abject. After winning 2-1 there on 25 September 1982, it would be 6 February 1988 before Rangers tasted victory in the Granite City. In the intervening period, Aberdeen won six of the 10 fixtures played, including a 5-1 thumping on 19 January 1985. That encounter saw Derek Johnstone make his second debut for Rangers after coming back to the club from Chelsea.

It wasn’t much better at Ibrox. In the 14 league matches played between season 1979/80 – when Aberdeen won the first of three Premier Division titles in the decade – and the arrival of Graeme Souness in 1986, Rangers won only twice compared to seven wins for Alex Ferguson’s side.

In terms of runs of successive victories at Ibrox, Rangers’ best is 15. The run started with a 4-0 win on 12 January 1997 – the often underrated Erik Bo Andersen scored twice to make it five goals in three league games for the flame-haired Dane – and ended when we drew 0-0 on 5 November 2005. And since our return to the top flight in 2016, we have lost only two of the thirteen league matches at Ibrox. The 2-2 draw back in October was one of four that has ended with honours even.

Irrespective of history or current league form, Aberdeen are always a tough opponent and there is an intense rivalry between the two clubs. The Rangers supporters often bemoan the fact that Aberdeen can be on a wretched run yet when they catch sight of a set of royal blue jerseys, their players crank it up several notches. And this season has been no different, with results against Aberdeen accounting for four of the twenty points dropped this season. Only Motherwell (4) and Dundee United (5) can either match or beat that:

Prior to the 2-2 draw at Ibrox back in October, Aberdeen had won one and lost five of their previous six league games. Yet within 16 minutes, they were 2-0 up. Admittedly, Rangers defended poorly, but it took a late penalty from James Tavernier to claw Rangers back to level terms.

And when we faced them at Pittodrie on the return from the winter break, their form hadn’t got much better. Although they won three of the four league matches played in December, a run of three successive league defeats the previous month meant that Aberdeen went into the break lying in sixth place, 24 points adrift of Rangers. But again, they pulled a performance out of the bag, and a penalty from Lewis Ferguson earned a 1-1 draw. The careless shipping of points on that occasion would be a portent of things to come for Rangers too.

And as the Dons descend tomorrow intent on spoiling the 150th birthday celebrations, they are once again on a slippery slope. Recent form is such that they haven’t won in the league since Boxing Day – a run of five draws and four defeats – and only two of the eight wins they’ve registered this season have come away from Pittodrie. Defeat against Hearts at Tynecastle midweek saw them slither down the table to take up tenth place, although such is the congestion outside the top three, they are only three points behind in-form Livingston who are currently fourth.

Taking a closer look at Rangers’ home league form versus Aberdeen’s away league form then there should only be one winner in this one:

But while those stats suggest a home win is on the cards, you can never rule out Aberdeen. Their players will view this as an opportunity to ingratiate themselves again with their fanbase. The Aberdeen supporters will probably tolerate a lower half finish if their heroes leave Glasgow having created a significant bump in the road for Rangers as they try to beat a path towards the retention of the title.

The players may also be out to impress their new manager. Jim Goodwin was brought in to replace Stephen Glass, but the usual new manager ‘bounce’ hasn’t gained much altitude yet, Aberdeen drawing twice and losing once since the former St Mirren boss took over. It is to be hoped that that winless run is extended on Saturday.

For Rangers, there is no reason why this match shouldn’t yield another three precious points. Admittedly, it was a tad turgid midweek, but we got the job done. As sore as it might be on the eyes while putting a fair amount of pressure on our respective hearts, another ten ugly wins like that will see us over the line.

A big talking point going into this one is changes or the lack thereof. This is the first of five games in 15 days so as much as Gio has favoured consistency of selection since he came in, you have to think while maintaining his consistent core, he will add some freshness over that spell. Most of the players looked exhausted at the end of the match in Perth, and the likes of Scott Arfield and Leon Balogun, key players between now and the end of the season, must surely have their game time managed over the rest of this month. Perhaps Ryan Jack will return from his two-game absence – no doubt he’ll be subjected to a torrent of abuse from the away support – and Fashion Sakala may step in for Arfield. If fit, Filip Helander would also be a good shout to slot in at centre half. With the big Swede ineligible for the Europa League that would allow Balogun time to recharge ahead of the first leg against Crvena Zvezda on Thursday.

It promises to be another interesting and absorbing 90 minutes as the quest for 56 continues. Enjoy the match!