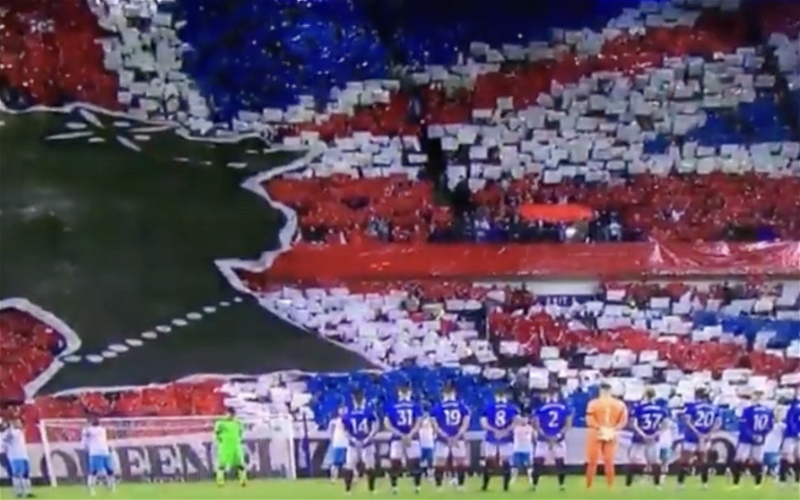 Cards on the table, when I saw that line up, my heart sank.  I feared the worst. I thought another doing was coming our way.  I thought we might be embarrassed again and it was clear from what I was reading online and the comments heard around me, that most felt exactly the same way.  I was staggered to learn that from our last three transfer windows, only two of fourteen signings had made tonight’s starting XI and have since read that nine had actually played under Steven Gerrard a full four years ago.  A very interesting or damning stat, depending how cynical you are but, certainly a frustration that I absolutely share with many of my fellow Bluenoses. What I cannot share however, is the venom and anger being directed towards the manager and players for the display they put in tonight.  On paper, I appreciate this one looks like another heavy defeat.  It’s another three goals conceded (now totalling 11 the past 3 games) with Napoli mustering over 20 attempts on goal.  That does not look good, of course it doesn’t but, it doesn’t tell the whole story, far from it.

From the first whistle, Rangers were in this game.  The ‘defensive’ looking line up, that had caused me to fear another hiding, turned out to be anything but.   Rangers flew at Napoli from the very first minute, and should’ve been ahead almost immediately, as the returning Alfredo Morelos, a complete nuisance and real handful all night, mis-timed his jump slightly and headed wide from a wicked Tavernier cross.  The capacity Ibrox crowd, responded in kind and the place immediately lifted.  It had been a subdued start in the stands and there was a sombre feel to this latest instalment of ‘Rangers in Europe’.  Understandable, of course, as Her Majesty The Queen was paid a very poignant and respectful tribute by all present, before the Stadium rose as one to give a rousing rendition of the National Anthem, in celebration of our new King.  There was a chance I felt, that the crowd would find it difficult to lift themselves and the team, such was the subdued atmosphere pre-game but, any fears I had were dispelled in those opening minutes.

Napoli, for their part, weren’t mere spectators in this movie.  Following Morelos chance, they immediately surged forward and could’ve gone ahead as the ball crashed off Allan McGregor’s upright, with the veteran Rangers ‘keeper (one of two survivors along with Steve Davis from our last Champions League campaign some ten years ago), rooted to his spot.  With that we had a game on our hands.  Two giants of European football, going at each other. Full blooded tackles, powerful overlapping runs, strikes at goal, fantastic saves and a jumping Stadium packed to the rafters.  This is what we all wanted, this is what we signed up for and it’s for that reason, I’m finding it difficult to be too despondent this evening and certainly, I just cannot get on board with the bashing they are taking from some tonight.

Of course, losing any game at Rangers is a disaster and three in a row, just unthinkable but, in the context of this past ten days?  There are positives to take from tonight’s game, as tough as that will be for some to accept.  Let’s be clear, the defeats last week were horrible but, the results weren’t the biggest issue for me, it was the manner of them.  As a bare minimum we, as Rangers fans demand that our players put everything on the line for this shirt, and the players and manager were rightly criticised for two diabolical performances but, I seen enough tonight to suggest there IS still something to be offered from this group and it felt like a few issues were addressed.

We asked the manager make changes to the team and formation.

We asked they become more of an attacking threat whilst being much tighter at the back.

We asked that Morelos and McGregor come back into the fold.

We asked for the ridiculous zonal marking strategy to be binned.

We asked for the team to show more passion and urgency.

And above all we demanded that this group of players show some belief that they are actually Rangers players and what it means to represent this great Club.

By the way, this isn’t a dig at our fans.  These are all common complaints I’ve read over the past fortnight and for what it’s worth, I agree with every single one.  I just think that, despite another defeat, the team and manager went some way to answering a number of questioned levelled at them recently and rather than being outplayed and battered, as so many expected, it was the fine margins of Champions League football that were ultimately the difference as Napoli ran out 3-0 winners.

Of course, that doesn’t mean everything is rosy now, far from it.  As we already touched on, there are serious questions being asked of Rangers recruitment, something the manager didn’t take too kindly to, after he was asked about it, and more specifically £4m signing, Ben Davies warming the bench for another game.

I always pick the team who I think can win the game.  I can’t just put in three new signings (for the sake of it).  I can see how the players are playing and how they train and then I make a decision on that, not if they are a new signing or if they have been here ten years.  I also thought the starting XI played really well.  Ben Davies, has just returned from injury and still getting up to speed. Leon King also played really well in the second half against Ajax, so that’s why I put him in.

The kind of response you expect from a modern-day manager, who is absolutely schooled at batting such questions away with ease however, his reluctance to answer it fully, has many supporters questioning if all is well behind the scenes on that front.  Van Bronckhorst will rightly say that he has been unlucky with key players being unavailable to him through injury.  Tom Lawrence in particular has been a real blow to lose after such a promising start but, his praise of Leon King, brings me to my next gripe.  At what point do we realise that we cannot keep going into huge games with James Sands as a first-choice centre back?  I think Sands has done very well at times this season (PSV away he was outstanding) and he leaves everything out on the pitch but, he tackles, full blooded like a defensive midfield player because, that’s exactly what he is! We were given a warning against Ross County, where he was lucky not to walk for a rash tackle near the half way line.  Tonight, a similarly rash tackle has seen him be sent off and effectively change the game, even if I do think he was a bit unlucky (if you watch it back, he definitely gets something on the ball, for those wondering what I’m wittering on about).  I appreciate James Sands has been asked to fill in but, when you have a young, hungry centre half like Leon King, who hasn’t put a foot wrong when called upon, sitting on the bench week after week, when does Gio go for it and pitch him in to a proper run of games?  As far as I can see this boy has all the attributes to be a top top player and will only mature further by getting more minutes.

For what it’s worth this isn’t meant to single out James Sands, as said he has done well and probably deserves his chance to try and get himself into the team, as part of a midfield three but, I’m a great believer in ‘best players, in their best positions’.  Whilst Leon King has that all still to do, it’s fair to say that James Sands has proven that he isn’t in that category when it comes to centre half.  Getting King in there, not only strengthens our defence, in my view, it also gets our best midfielder back into midfield.  John Lundstram was another who did very well tonight, never putting a foot wrong and whilst I very much appreciated the sterling work of Davis and Jack, John is the heartbeat of our midfield and that’s where he is most effective.

Talking of ‘best in their positions’ I’ll sign off with a word for Allan McGregor.  I’m one who felt his time with the club should probably have ended last season.  We can debate all day to the rights and wrongs of us NOT signing a new keeper but, the fact is, McGregor is a Rangers player and it’s fair to say he has rammed that right down my throat tonight.  An outstanding display and as far as I’m concerned, the Number 1 jersey should be his again for the time being.

God Save The King