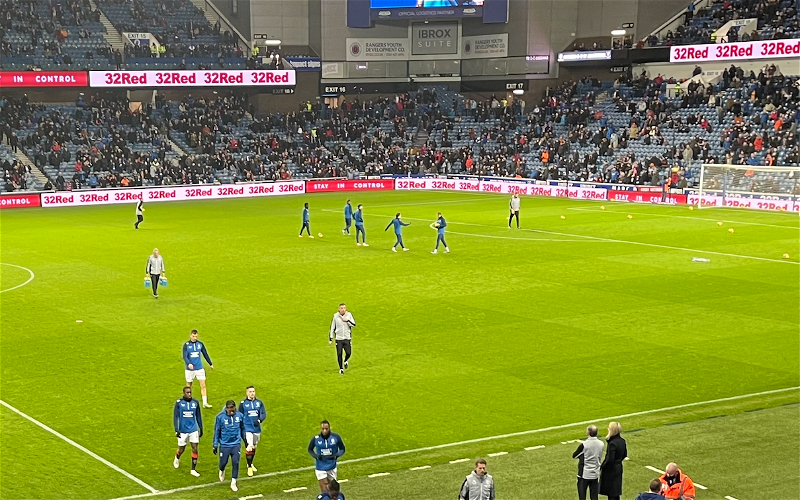 Ten days before Santa Claus will be squeezing his rotund red-clad tummy down chimneys across the world, it was imperative that Rangers didn’t steal the man from the North Pole’s thunder and hand out an early Christmas gift to the chasing pack. In the first of a trio of festive home fixtures, the league leaders faced St Johnstone, and with Celtic still very much visible in the rear-view mirror, there was no room for error.

Despite Christmas and the heightened concerns around the latest strain of coronavirus, there weren’t as many empty seats as we have seen at other stadia in Glasgow of late – the attendance was 47,561 – and on a mild night, there was the usual buzz of anticipation in the air when the teams came out just before quarter to eight.

Giovanni van Bronckhorst hasn’t just hit the ground running since taking over from Steven Gerrard, he’s rocketed out the blocks. Four wins out of four in the league, two of which were tricky trips to Edinburgh, is impressive, and in keeping with one of the hallmarks of his tenure thus far, van Bronckhorst didn’t tinker too much with his team selection. The only change was the return of Ianis Hagi, with Fashion Sakala dropping to the bench. The Zambian had a very good game at Tynecastle, but with St Johnstone likely to sit deep, the guile of Hagi was a better option from the get-go than the searing pace offered by Sakala.

The visitors included their recent signing, Jacob Butterfield, in their starting XI. Aged 31, he’s a real football nomad. There were high hopes for him at one stage – he joined Derby County for £5,000,000 in 2015 – but after loan spells at Sheffield Wednesday and his hometown club, Bradford City, Butterfield joined Luton Town in 2019. After a season with the Hatters, he went to Australia to play for Melbourne Victory, and with almost 350 league appearances under his belt, Callum Davidson would have been expecting him to make a contribution to his struggling Saints side. Davidson also selected the former Rangers winger, Michael O’Halloran, and Zander Clark, who had defied Rangers the last time the sides met at Ibrox and has been linked with a move to Glasgow, was in goal. He was, understandably, expected to have a busy evening.

The drizzly rain that had fallen from the night sky as the fans made their way to Ibrox had relented by the time Alfredo Morelos kicked off, with Rangers as is often the case in the opening half, attacking the Broomloan Road end.

Rangers set up in the now familiar and fluid 4-2-3-1 formation. Scott Arfield started as the ‘10’, with Hagi to his right and Kent to his left. And that set up would have to pick its way through a resolute red barrier, the visitors adopting a defensive 5-4-1.

The game started with a couple of early openings for Rangers. Joe Aribo, who was immense once again, worked a one-two with Arfield and played a pass to Kent. The winger cut inside, but his right foot shot didn’t trouble Clark. And shortly afterwards, intricate play in and around the right-hand side of the box involving Aribo and Hagi almost released Morelos, although El Buffalo was in offside position.

Initially, there wasn’t much pace about the game. Rangers were passing and probing, but not getting many clearcut chances. But as the first rendition of the evening of the Rangers fans take on ABBA’s ‘Super Trouper’ filled the air, they almost hit the front. Kamara battled well to win the ball in midfield. The Finn fed the ball to Kent who bamboozled the St Johnstone defence with some twists and turns. That gave him a sight of goal, but his netbound shot was pawed away by Clark. A minute later, Kent was in the thick of it again, crossing towards Hagi, but Clark wasn’t called into action.

Next to try his luck was the irresistible Joe Aribo. The Nigerian is in the form of his life, and he almost netted another belter when he moved the ball onto his left foot and sent a swerving and dipping shot from distance that kissed the outside of the post. Shooting from long range was a rarity in the first half, though, with Rangers often playing one pass too many around the box when a shot at goal may well have broken the deadlock.

It was all about patience and perseverance for Rangers. Allan McGregor had been a spectator in the opening 20 minutes, as the home side pummelled the St Johnstone defence. Kent was next to try his luck, making room for a left foot shot that was blocked by Clark at his near post. And only a last-ditch intervention in the six-yard box denied Kent the opener when Aribo linked with Morelos and fizzed a low cross into the six-yard box.

It was one-way traffic, and the best chance of the night fell to Morelos after 26 minutes. Another Tavernier corner from the right was cleared, but the ball found its way to the Colombian. He seemed odds on to score, but he dallied on the ball and his shot was snuffed out. The industrious Ianis Hagi then tugged a shot into the side netting.

Frustration was starting to grow, and there were groans when Aribo fired in a shot that was high, wide and not very handsome. The manager had stood on the edge of the technical area for most of the early part of the game, hands thrust in his jacket pockets, surveying the play. He had been animated on occasion, but he was now sitting in the dugout with his staff, pondering how his team could break the resistance of the visitors.

And it was eventually broken three minutes shy of the interval. A burst forward from Calvin Bassey a couple of minutes earlier had been ended abruptly by a crude challenge, but when the Nigerian emerged from defence again, he had a much more fruitful outcome. He played his part by funnelling the ball wide to Ryan Kent whose cross was blocked for a corner on the left. Borna Barisic took it, and when his delivery was headed towards goal by Goldson, Morelos stooped to head the ball home at the back post.

The timing of the goal was perfect, and no more than Rangers deserved for their dominant display. And they perhaps should have gone in at the break two goals to the good. Ryan Kent had bobbed and weaved and jinked and twisted for much of the match, and he did the same again when he picked the ball up in a congested area. He worked a one-two with Morelos but having done the hard work to create the opening, he tugged his left foot shot wide of target.

St Johnstone had been toothless in attack and that’s perhaps why Callum Davidson saw fit to withdraw the anonymous Eetu Vertaninen and bring on the experienced Stevie May. It did little to stem the flow, though, and May was often left isolated as his team tried to keep Rangers at bay.

Rangers, unchanged, emerged and were immediately back on the front foot. And after Morelos was thwarted by Clark, the Colombian played a pivotal role in the crucial second goal after 49 minutes. He has been criticised this season, but since van Bronckhorst arrived he’s looked like his old self again. And it was a textbook Morelos move that opened up the Saints defence, taking the ball in to feet then spinning the defender on the halfway line. That created acres of space for him to burst into and when he looked up, Kent was charging in at the back post to meet his perfectly placed pass.

The goal was followed by the crowd serenading the manager, but initially at least, Rangers didn’t let up in their pursuit of more goals. They were relentless and camped in the final third of the pitch. Morelos was everywhere and anywhere, back to his best, and Joe Aribo was caressing the ball with consummate ease. He had one particularly delicious touch late on in the game that drew gasps of amazement and rapturous applause from the fans.

But 2-0 can be a fragile lead even if you are in the ascendancy. And after 61 minutes, Reece Devine delivered a warning shot across Rangers’ bows when he tugged a shot wide. It was a rare sight of goal for the visitors, but three minutes later, there was panic in the Rangers box when McGregor fumbled the ball. Jamie McCart was eventually picked out at the back post, but he couldn’t get his header on target.

This was a sloppy spell from Rangers, and it was summed up when the ball was worked across the penalty area to Barisic only for the Croatian to sclaff his shot wide when well placed.

Gio van Bronckhorst then made his first change, taking off Ryan Kent and bringing on the man who comes from Zambia, Fashion Sakala. Kent had flitted in and out of the game at times, but when he was on the ball, he was threat and he received an arm round his shoulder and a congratulatory pat on the head from a satisfied van Bronckhorst.

The visitors changed personnel too, former Ranger O’ Halloran being taken off and replaced by Viv Solomon-Otabor. And the Englishman’s first involvement was to force a corner, his cross ricocheting off Goldson. The delivery on this occasion didn’t cause the same level of anxiety as the last one, though, McGregor punching clear comfortably.

There was then what on first viewing looked like a very good penalty claim from St Johnstone. Kamara, who had bossed the midfield for most of the game, was uncharacteristically wayward with a pass, and in an effort to recover possession looked to have clattered into Liam Craig from behind in the box. But referee Euan Anderson called it correct, booking an incandescent Craig for simulation. Looking back there was little in the way of contact, and it was poor play from Craig trying to con the referee in that manner.

That incident seemed to kick Rangers back into a higher gear again, and Hagi had a couple of openings, his first shot being blocked by Clark before he jinked into a shooting position and saw his effort spin high into the air off a defender.

There was a recognisable hunger and desire about the players, something that had been conspicuous by its absence earlier in the season. Rangers may well have been getting results but had been winning ugly and not playing particularly well. Under van Bronckhorst, though, they are suffocating teams, not giving them an opportunity to breathe. This approach will continue to reap a rich dividend as the season progresses.

With news filtering through about matters going on in Dingwall, all eyes and ears were now focussing on events up in the Highlands. Fans were rapidly refreshing live feeds on their phones, but the late, late goal scored in that match shouldn’t detract from what was a ruthless and professional performance from Rangers.

It’s now five league wins out of five for van Bronckhorst. And to use the new phrase that pays at Ibrox, Rangers have ‘kept the zero’ in four of those matches. The change in the team dynamic has been tremendous, and Rangers are watchable again. The balletic grace of Joe Aribo, the bustling of Bassey, and the return to form of Morelos have been the standouts, but there’s a buzz and a bounce about us at the moment. And if that continues into the New Year then Rangers will be front and centre when the prizes are handed out in May.