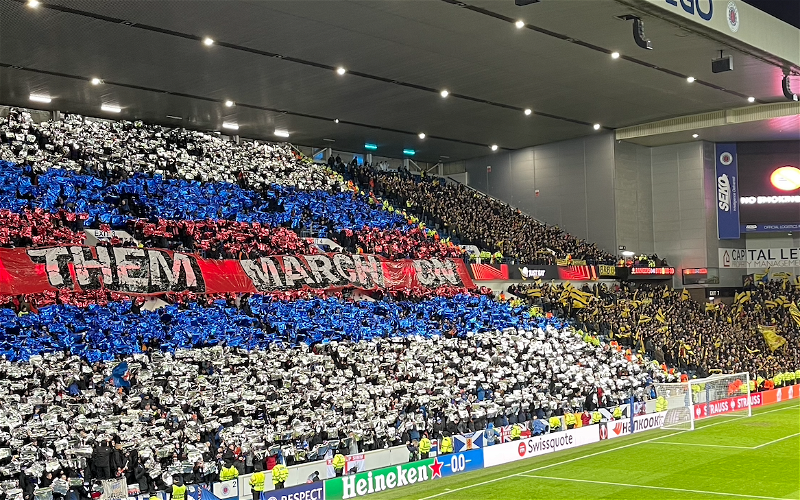 Last Thursday in Dortmund was surreal. We dominated the home side for spells and scored four goals. But on a night when thunder snow was forecast in Glasgow, most ‘learned’ individuals reckoned that the natural order would be restored and, in a flash, Rangers would be out of the Europa League. Twas not the case, though.

Admittedly it was bitterly cold as the hordes descended on the Ibrox citadel. But the warm glow of a 4-2 lead kept the Bears nice and warm as they took their seats to build a quite incredible and intimidating atmosphere. Save the 2,700 Dortmund fans, the majority of the 47,709 crowd were there to help their heroes deliver that uppercut, jab or hook that would knockout one of the heavyweights of the European game.

Rangers were unchanged from the XI that excelled in Dortmund. Some may have expected Leon Balogun to return at centre back, but van Bronckhorst kept faith with the side that had put Rangers in the box seats for qualification for the last 16.

As expected, Dortmund made changes. In came the former Liverpool defensive midfielder, Emre Can, the Belgian, Thomas Meunier, Eden Hazard’s brother, Thorgen, and Nico Schulz. Given that Can and Meunier had 116 appearances between them in European competition, the changes fortified what was already a formidable Dortmund side.

The teams emerged and the decibel level was off the charts. It was ear splitting, and Ibrox was enshrouded in a cloud of yellow as smoke bombs were set off by the visiting fans. This was what it was all about, Rangers going toe-to-toe once again with the top sides in Europe under the lights at Ibrox.

Rangers kicked off, attacking the Broomloan Road end. As expected, they set up in a 4-2-3-1 formation, while Dortmund favoured 3-4-1-2. And it was the homes side who enjoyed a positive start to the game. Pressing high up the pitch, Morelos won an early free-kick. Tavernier took it, but although he picked Morelos, the Colombian couldn’t keep his header down.

But if the home support thought they were in for a relaxed night, then they were rudely awakened after just four minutes. Dortmund won the first corner following a sliding challenge from Tavernier after play had been switched from right to left. Brandt’s delivery to the back post wasn’t dealt with, and Jude Bellingham, who had an excellent match, struck the post. And when the ball came back into the area, Joe Aribo tried to shepherd it out of play, but was outmuscled. That presented Hummels with an opportunity that was blocked by Bassey.

It was a frantic start, and there wasn’t much let up as the half progressed. When in possession, Rangers were patient and disciplined, and although they had to face a series of corners, they defended stoutly before, out of the blue, they took the lead after 21 minutes.

A long ball from Goldson broke to the industrious Arfield. He passed to Morelos who touched the ball into the path of Aribo. The Nigerian swept a pass wide to Kent, and when the Englishman cut inside, he was tripped by Brandt. In real time, it appeared that the infringement may have taken place outside the box, but TV replays proved otherwise. Rangers had a penalty kick and with it a huge opportunity to edge closer to the last 16 of the competition. And Tavernier did what Tavernier usually does from 12 yards, he rattled the ball into the net.

Ibrox was absolutely rocking, but although they were now three goals in arrears, Dortmund were far from out of it. And that was proven after 25 minutes when McGregor pulled off a stunning save, standing tall to parry away a shot from the penalty sinner, Brandt.

Rangers didn’t heed the warning, though, and just after the half hour mark, Dortmund drew level. The defence stood off Malen and his attempted pass to Bellingham caught Goldson on his heels. The Rangers vice-captain could only play the ball into the path of the young Englishman who confidently stroked it into the net with his right foot.

The visitors now had their tails up, but the next opportunity to score fell to Rangers. Joe Aribo cushioned a lovely pass into the path of Arfield, and although he was foiled by Kobel, the ball broke to Morelos who blasted goalward only to be denied by Mats Hummels. He should have scored, and on second viewing, Arfield should probably have squared the ball to Kent rather than go for goal.

Those misses seemed to sting Dortmund. They immediately sprung to the other end, forcing McGregor to make another stunning save to deny Malen. And three minutes shy of the interval they reduced the deficit when they scored a second goal. Again, the concession of the goal was self-inflicted, Rangers guilty of backing off, allowing Meunier time to play the ball into the box. Goldson should have cut it out, but the ball found its way through to Brandt, and when he played it into the danger area, Malen poked it beyond McGregor.

Rangers were rattled and when Barisic overcooked a pass to Kent, discontent filled the stands for the first time. And it took another save from McGregor to ensure that the aggregate score wasn’t level when the teams trooped off at half time, the veteran clutching an effort from Meunier.

One thing that has been a hallmark of Gio van Bronckhorst’s time as the Rangers manager is that he makes effective changes. And boy did he make one at half time. He introduced Leon Balogun for Borna Barisic, but as well as changing personnel, he also changed formation.

As expected, Balogun went into the middle of the defence, with Calvin Bassey moving out to left back. But what no one expected to see was John Lundstram dropping back alongside Goldson and Balogun to form a back three. It was a masterstroke, a tie-defining one.

With Kent joining Morelos up front, there was a cut and thrust about Rangers’ early play, and El Buffalo almost equalised on the night after 49 minutes when he spun clear of Hummels, cut inside and shot for goal. Kobel made the save at his near post, and from the resulting corner, the ball broke to Ryan Jack, but he hooked his shot over the bar.

Remarkably, it was all Rangers, and after Morelos had another shot saved, the home side were level, restoring their two-goal aggregate lead in the process.

Tavernier produced a great touch on the right to kill the ball as it dropped out of the night sky. From there the ball was worked across to Bassey. He bustled his way into space and fired in a cross that evaded everyone apart from Tavernier. The Rangers captain showed great composure to volley the ball beyond Kobel, and Ibrox was bouncing again.

The gauntlet had been thrown down for Dortmund, but it was Rangers who were denied the chance to well and truly kill the tie after 66 minutes. Can was harassed and then robbed by Morelos, and when the Colombian unselfishly squared the ball to Kent to tap in, it looked as if Rangers astonishingly had scored their seventh goal of the tie. Bedlam ensued, but VAR was to intervene.

As the Rangers players celebrated, the red-shirted referee, Antonio Mateu Lahoz from Spain, elected to consult with technology. His decision was to rule the goal out for a foul by Morelos on Can. It was a shocking decision as TV footage clearly showed that the German had actually kicked Morelos rather than the other way around. Evidently, Senor Lahoz had not been privy to viewing the same coverage.

In the aftermath, van Bronckhorst brought on Glen Kamara for Scott Arfield. But Rangers now had a platform. If they kept it tight and repelled what Dortmund threw at them then their ball would be in the bowl for the draw for the last 16.

But rather than sit in and invite their opponents on to them, Rangers looked the most threatening as the game entered its closing stages. And had Kent, who was magnificent again, not taken a heavy touch when he burst clear with 15 minutes to go, he may well have put the tie beyond doubt.

Dortmund now had to push forward in search of the two goals they needed to force extra time. But Rangers’ pressing was excellent, with and without the ball. They formed a thick blue line that stoically repelled the yellow and black tide.

If truth be told, while they had to defend and keep their shape and bodies were placed on the line from time to time, Rangers were not overly troubled in the closing stages as they chalked up what must rank as one of the best aggregate victories they have recorded since the club first played in European competition almost 66 years ago.

It’s after 2am as I draw this report to a close. And I’m going to finish with a different take on the classic ‘Oh What a Night’ by the Four Seasons:

Thanks to all the boys in royal blue,

What a display, what a night!

Ladies and gentlemen, the quest for supremacy on three fronts most definitely continues.