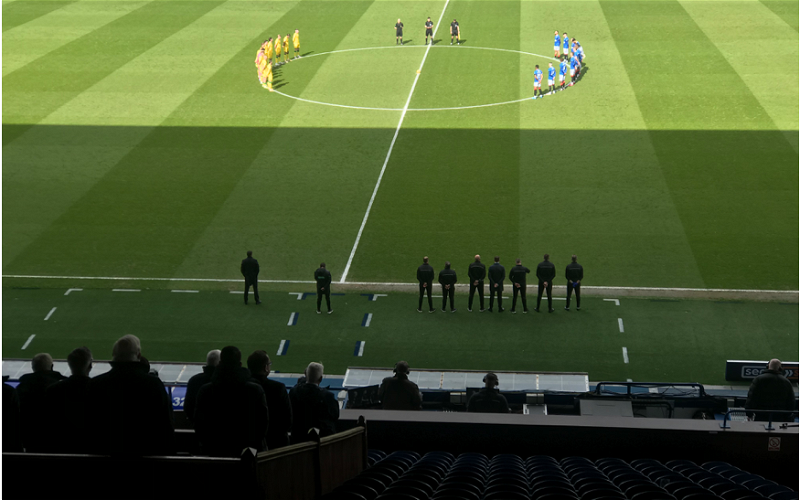 Th game commenced after a minutes silences to honour the passing of Prince Philip.

The game only came alive in the 18th minute with a disallowed goal for Rangers.  Davis slipped the ball to Aribo who crossed it across the face of goal for Roofe to tap in.  But it was offside.

Shortly thereafter the ball again went into the danger zone for Aribo himself to score.  Aribo started the move on the edge of the box, he passed to Patterson who slipped the ball to Morelos whose pass to Roofe rebounded up for Aribo to smash into the net.

In 37 mins Joe Newall supplied the pass for Kevin Nisbet and put through for a shot on the run which went past the far post.

Shorty thereafter Martin Boyle went on a mazy run – he picked up the ball and wrong-footed Helander and set himself up for a powerful low shot which McGregor turned around the post.

44 mins saw an uncharacteristic error gave Nesbit the ball which he immediately used for a low shot which McGregor saved.

The first quarter of the second half was played at a pace reminiscent of a West Germany v Austria game.  Then Ryan Kent picked the ball up wide on the right and cut inside going past three defenders before opening up with a ferocious shot outside the box which flew into the net.

In 78 mins Nisbet scored for Hibs – a long high pass came in for him – Nisbet got in front of Goldson to head into the net.

After the match Steven Gerrard said he’s been very pleased with the home stats this season and in this game the team showed real control in the first half.  Ryan Kent scored a world class goal – perhaps the goal of the season.

Looking forward to the Celtic cup tie Gerrard commented that the players will have a day off tomorrow before starting preparation and he was waiting for the authorities to decide on the match timing.

There’s no Ryan Jack news and Tavernier has trained a few times this week and will have to show this week before any decision is made on the Celtic game.

He enjoyed the joust between Nathan Patterson and Josh Doig – Scotland are lucky to have two such up and coming talents.

Hibs manager Jack Ross said their goal was good reward for the players and the club had been brave in their line-up choices.  Hibs showed quality in the areas they got into and pushed an exceptional team very hard.

Martin Boyle said he was bundled over but he never claimed for a penalty.  He described Ryan Kent’s goal as “sheer brilliance.’