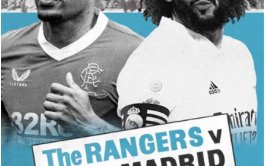 Rangers started in a very lively fashion – with Fashion Sakala having two chances within the first three minutes.  The first came from a Lundstram cross from the right, and the other – a more deliberately placed shot from himself – directly on the left of the box.

Despite the early pressure it was Real who took the lead.  Martin Odegaard strode through the midfield eating up the yards before he passed to Rodrygo on the corner of the box to his left.

Rodrygo cut inside slightly bewildering Davis who ended up on his hind-end before calmly slotting the ball home.

Sakala would have a second brace of chances around the quarter hour mark – in the first a move involving Hagi, Kent and Tavernier ended up with him having a header.  In the second, Scott Wright broke forward confidently to provide the pass, Sakala cut inside and shot, it hit a defender’s leg and went out for the corner.

In the 29th minute Rangers hit the bar. – Wright broke down the left and pushed the ball across to Sakala who touched it onto Kent at the left hand post where Kent, tight against the goal-line contrived to put the ball over the bar.

32nd minute – Kent fired in a rocketing shot which the keeper parried after neat work by Hagi set him up for the shot.

The second half had a lively start and a chance for Madrid – Rodrygo and Marcelo combined on the left to provide a cross for half-time sub Arribas which he headed over.

Sakala then had two chances in just over a minute – the first being a cross from Helander, he went for the header and just missed contact.

The second saw Kamare hustle the Madrid defence and poked through the ball to Sakala who took it on a run, fighting off the attentions of the defence to rocket in a shot to make it 1-1.

In the 76th minute Itten scored with a crisp shot – originally a corner was taken but the ball was recycled in by David not he left with a long high ball – Goldson feigned to go for it and Itten took his chance twisting his body around before driving in the shot.  2-1.