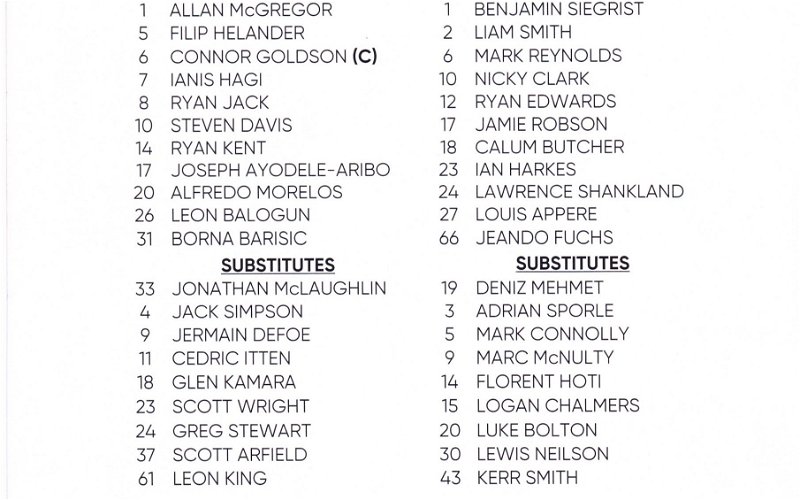 Dundee United started with two up front and a defence which saw, at times, all of the other eight outfield players fall back almost into a line in defence.

After a tentative start United made the first real move of the game when some neat passing led to Lawrence Shankland getting off a shot which McGregor saved.

Four minutes later Joe Aribo was involved in a clash with the United keeper after receiving a long pass from Davis.

Aribo would be man of the match and involved in all sorts of action, in the 20th minute he got a shot off after a neat sidestep turned Jeando Fuchs.

Rangers were coming more into the match and – after an interchange with Karama, Hagi and Aribo – Hagi found himself able to add the simplest of touches to a shot from Aribo to put the ball into the net for the first goal of the game.

Three minutes later Rangers were 2-0 up after the ball fell to Kent who was able to volley his shot into the net via a deflection from Ryan Edwards.

The second half started briskly and just two minutes in Aribo was able to net with a great left foot shot from the corner of the box after a move involving Barasic, Aribo and Morelos set him up.

In 63 minutes the tireless Morelos got on the scoresheet after a footrace with the defence ended with the defender passing back to the keeper who then attempted to clear by kicking he back – which hit off Alfie and into the net!  Four-nil.

With the game won Rangers visibly relaxed and sadly got a little sloppy.  Slackness at the edge of the box with just two minutes left on the clock saw Mark McNulty get the ball before stepping inside to hit a shot low to McGregor’s right to gain a consolation goal.

After the match Steven Gerrard noted United started brightly and played well in the first 20/25 games before Rangers really got into the game.  He noted Aribo’s goal as a highlight and praised him for the recovery he has made from his injury.  He noted Ryan Jack came off after feeling a bit of tightness in his thigh.

Speaking after making his debut Jack Simpson said he was delighted to play and noted the high standard of training set for Rangers players.   Says he’s been made to feel really welcome by the squad.

Man of the Match Joe Aribo said they had to fight hard to get into the match.  Delighted to get the goal and happy his hours on the training ground had paid off.