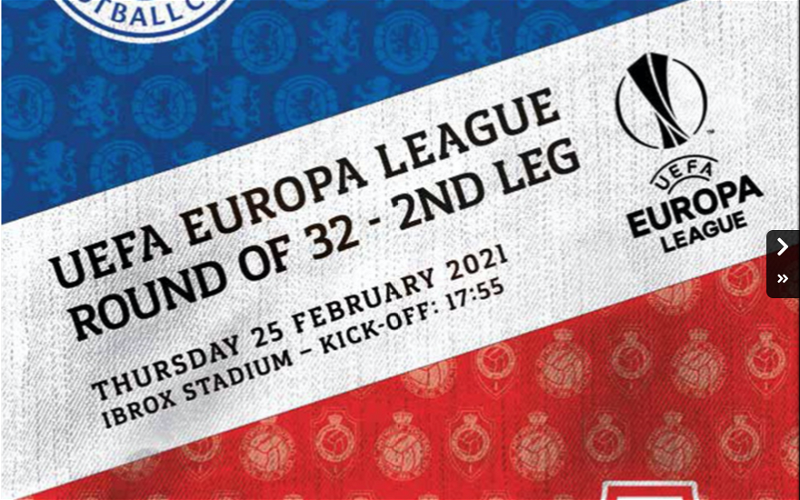 What a night at Ibrox!  The first five minutes were dull but then came two early shots from Kent –  one went out for a corner after a low diving parry from the keeper.

Rangers took the lead in the eighth minute.  A long ball out of defence from Goldson put pressure on the Antwerp left neck who hurried his pass under pressure from Hagi – Kent nipped in to rob the defender, dash into the area and square the ball to Morelos who promptly fired in a reverse shot from just inside the box.

Kamara would play well all night and in the 28th his pass went down the right to Hagi who received, turned and shot only for De Wolf to beat it down.

One the half hour Lukuka took the ball down the wing to the bye-line before sharply crossing into the path of Regelov who netted from a tight angle.

Lukaku was a danger down the Rangers right win all half.  Balogun had been under that pressure and he was substituted at half time by Nathan Patterson – and what a substitution that would be.

Nathan Patterson came on and scored, his first for the club –  within 17 seconds  – Hagi won the ball and passed to Morelos who put through the ball to the right back charging forward who calmly slotted the ball low into the net.

In the 55th Hagi made a pass at the end of a long run to Morelos down the right before jinking past his marker – he then passed to  Kent in the middle for him to slot home.

Within minutes Antwerp were back in the game.  Lamkel Ze scored – he received a flicked pass over the head of Goldson which he calmly collected in the box for a sidestep into the goalmouth.

In the 78th minute Morelos was clipped by Marchand just inside the box pass from Davis.  Barasic took the penalty to the left – the goalkeeper nearly got a slight hand to it but it was well-struck.

In the final action of the match substitute Ampomah caught Scott Wright inside the box on the 91st minute.  Itten took the penalty which hit off the keepers legs before settling in the net.