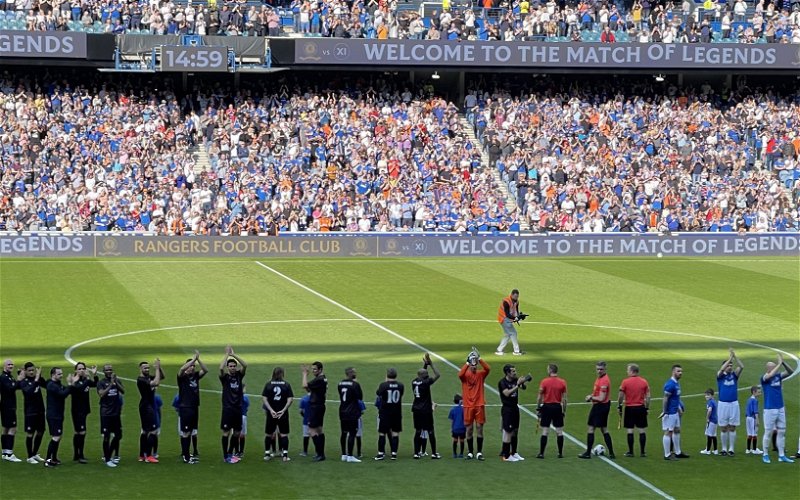 It was a glorious day in the sunshine at Ibrox as Rangers Legends took on a World XI as part of the club’s 150th anniversary.

Managed by Alex McLeish, it was a welcome home for many Rangers legends including Paul Gascoigne, Jorg Albertz and current boss Giovanni van Bronckhorst.

Albertz was up to his old tricks in the 5th minute, by hammering a shot from outside the box which was awkwardly punched away by his compatriot Jens Lehmann.

Straight away, the World XI countered and Gio’s assistant Roy Makaay struck the left post with a turning shot.

The World XI hit the post a short while later through Claude Makelele, with the Rangers defence under siege.

It was Rangers, however who took the lead just before half time as Shota Arveladze headed home a Ronald de Boer cross from the right-hand side.

The 2nd half started as a dull affair and was brightened up by the ever-charismatic Paul Gascoigne who kissed and waved to the camera as it was panned over him. The Englishman was greeted with a hero’s applause as he came on for

Brazilian superstar Kaka was in the mood, and he hit a tantalising curling effort of the post, not even a minute later the former Milan man was in the same position again, only electing to cross instead of shoot and found the head of Carlos Marchena who put it past Neil Alexander.

The World XI then took the lead through Nuno Gomes who curled home an effort after a lobbed pass from Figo, the Portuguese connection working well.

Rangers tried to push for an equaliser in the last 10 minutes and Nacho Novo came close as he fired a parried shot wide of the goal.

The Spaniard was then through but called offside, a call that did not please Paul Gascoigne who ran over and argued with the 4th official.

Ricardo Quaresma wrapped up the victory for the World XI as he whacked the ball with the outside of his boot into the top corner.

Gazza finally got his moment as he was subbed on towards the end and got a deserving standing ovation from the 38,000 inside his former home with every fan singing ‘One Paul Gascoigne’.

The 9 in a row hero got his goal at the end and fired home from inside the box and both set of players celebrated by jumoing up and down with him as the final whistle blew.

Nevertheless, the main reason for the gathering was to celebrate our club’s 150th Anniversary and of course, raise money for the Luis Figo foundation.

Man of the match: Marvin Andrews