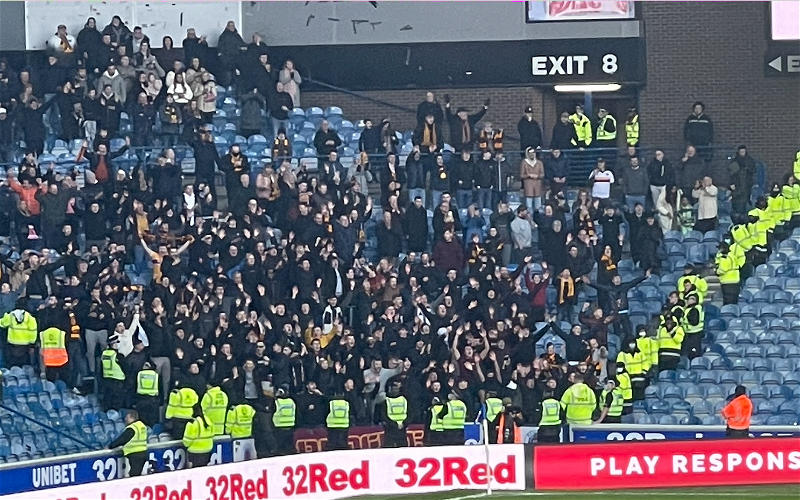 Rangers were brought back to earth with a bang, blowing a two-goal lead and missing the chance to narrow the gap, at the top of the table to just one point, after drawing 2-2 with Motherwell this afternoon at Ibrox.  After the highs of midweek, where the light blues swept aside Borussia Dortmund, the team’s inconsistency to see out games they are dominating, which has haunted them domestically this season, returned.  In a week that has seen Rangers have no fewer than SIXTY attempts on goal, between the two league matches against Motherwell and Dundee Utd, questions are now being asked of the current Champions’, league winning credentials for this term.  Rangers have now won only three of their last eight league games however, Giovanni Van Bronckhorst dismissed any suggestion that his players don’t have the right mentality to retain their title, they won so emphatically in May.

I think the mentality is good, I never got any complaints about the mentality on Thursday, it’s the same group of players. They want to win but, we need to be more ruthless defensively and we need to be more clinical in front of goal.  If you look after the break there are four draws and that isn’t good enough, it has to be better.  Obviously, we cannot continue dominating games and only getting one point out of it.

It was a frustrating second half for Rangers, and the manager concedes there was issues at both ends of the pitch but, it was the drop off in intensity that alarmed many of the Rangers fans present.  The reluctance of Gio to introduce freshness into his XI along with the decision to shuffle the back four, had many asking questions, particularly around John Lundstram starting at centre back with Leon Balogun named amongst the substitutes. Lundstram, of course, was part of a midweek masterstroke from Van Bronckhorst as he slotted in and made up a back three against Dortmund in a superb second half display but, it was a move that seemed to back-fire today after Woolery ghosted past him to set up Motherwell’s first goal and spark their fightback. Gio explained:

Well Fil was not available and Leon just came back from injury.  We took quite a risk to put him in on Thursday and he wasn’t able to start today.  For me, John did really well you could see his passing and defensively play, he was strong. We created 30 chances; I know it’s been hard weeks but we are playing well.  It’s not like we aren’t creating anything.

Gio was also quick to defend goalkeeper, Alan McGregor after he was beaten at his near post for the Motherwell equaliser, providing a stern answer that today’s result was on the full team, not just one player.

If we get a goal against us, it’s not only the fault of the goalkeeper.  You defend as a team and even in our build up we did things we wouldn’t usually do, so it starts there. As I’ve said before Alan is a good and experienced goalkeeper, it’s too easy to put the blame on him after we conceded the two goals.

One thing is for certain, Rangers cannot afford to continue with what is now becoming a frustrating trend on league duty.  Countless chances squandered and vulnerability at the back, is not what Champions make.  For weeks, the fans have watched Celtic get over the line in games, just waiting for the slip up that would inevitability come, only for Rangers to do exactly the same themselves and miss a glorious chance to get the team almost neck and neck in the title race.  Of course, no one is throwing in the towel just yet, it’s a frustrating day but, the one crumb of comfort is that there was no EXTRA damage done. This team are capable of magical moments, as we have all witnessed this week.  The results and performances against Dortmund were exceptional, up there with the very best European results for the club but, for today’s stutter is a stark reminder of the standards set at Rangers FC and how the demands of the fans will never waver, no matter how well you’ve played in the game or even the HALF prior.  It’s an age old (and clichéd) saying ‘you are only as good as your last game’ and that has never been more apparent than this week.  If last weekend was disappointing, this one was most definitely a tough one to swallow.  With the games coming thick and fast, the manager and players will very quickly have the chance to right some wrongs but, one thing is for sure, the slip-ups at both ends of the field need to be rectified, and quickly.