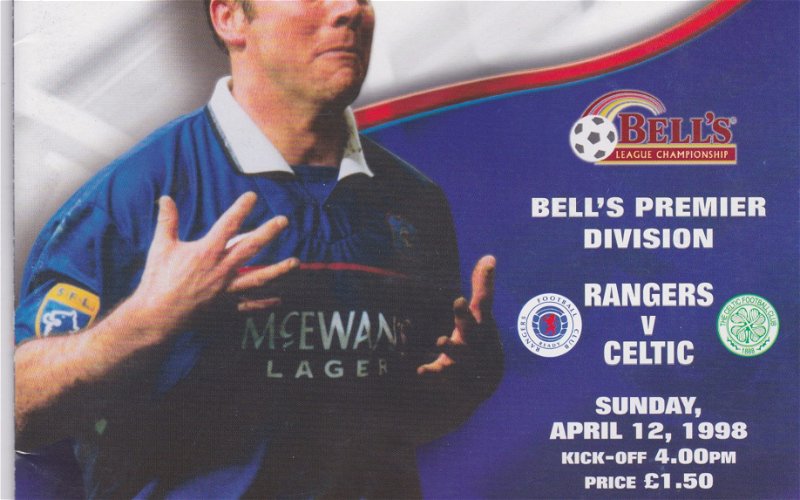 Make no mistake about it, Sunday’s battle of the behemoths of Scottish Football is the most significant for many years. The destination of this year’s Premiership title and the automatic qualification for the Champions League group stages that goes with it is likely to hinge on the outcome. For example, an away win would most certainly extinguish any hopes Rangers have of regaining the title and a draw may well do likewise.

But Rangers go into the game with history on their side. In the 111 league matches played at Ibrox between the two teams since the end of World War II, Celtic have won only 29 of them (26.126%). Rangers have emerged victorious on 57 occasions (55.351%).

The complete record is:

The first post-war fixture contested at Ibrox ended in a 1-1 draw, Torry Gillick scoring for Rangers. This was back in an era when teams only played each other twice a season in the league, once at home and once away. And for the first 25 years after the war ended, Celtic rarely left Ibrox with anything. They won just twice at Ibrox between 1946 and 1971, with Rangers winning 16 of the contests.

Rangers ruled the fixture during the 1970’s too, winning six and drawing three of the 12 matches that were played at Ibrox. Incidentally, this doesn’t include the ‘home’ matches in season 1978/79 as these were played at Hampden Park.

It was only really during the doleful period before Graeme Souness arrived that Celtic exerted some semblance of dominance at our place. In the 12 league matches played at Ibrox between 1 November 1980 and 22 March 1986, Celtic won six of them. Rangers registered four wins in that spell, but a couple of those were emphatic 3-0 wins and there was also a memorable 1-0 win in April 1984 that featured an audacious overhead kick winning goal from Bobby Williamson.

Although Rangers dominated the early part of the 1990s, results in Old Firm games at home were surprisingly mixed. After Terry Hurlock’s daisy cutter secured a 1-1 draw in September 1990, Rangers won only two of the next 11 Old Firm matches at Ibrox. Admittedly, Celtic only won three of the other nine, with that sequence featuring the epic 3-3 draw in November 1995 that featured an astounding save from Andy Goram.

The advent of the new millennium brought a change of fortune for the visitors from the East End, with five wins in seven matches between April 2001 and March 2004. But normal service was soon resumed, Rangers winning 10 of the next 16 on their own patch. And after an abject run of four successive losses, Rangers have won five of the last six Old Firm league fixtures at Ibrox.

A win on Sunday would mark the fifth time that Rangers have won four games in a row at home against their Old Firm rivals. This is our best winning run in the fixture and first occurred between 20 September 1947 and 1 January 1951. It happened again when Rangers dominated the Scottish game in the early Sixties and occurred for a third time in the late 1980s. That foursome was kicked off by the memorable 5-1 win on 27 August 1988, and to date the last time we did four-in-a-row was between 28 September 1996 and 12 April 1998.

Although we haven’t lost many against them, we have had to endure a couple of consecutive losses at Ibrox. Between 1 January 1983 and 5 November 1983, we lost three-in-a-row, and that happened again between 27 April 2003 and 28 March 2004. But our longest run of successive losses at Ibrox stands at four which occurred only a few years ago. After losing 2-1 on 31 December 2016, we lost four on the spin on home turf, the last of which was a 3-2 defeat in a match that we had twice taken the lead.

Two magnificent occasions in Rangers’ history. The first encounter will always be remembered for the venomous volley from Ray Wilkins that edged Rangers 2-1 ahead and Souness coming on as sub and taking the sting out the game when further humiliation beckoned. Meanwhile, the latter was the debut match for one Tore Andre Flo who had joined from Chelsea for a ‘paltry’ £12,000,000. Flo scored our second goal, but it would be the only time he would find the net against Celtic during his short spell in Glasgow.

No words are required for this one. A dark, dark day, and looking back now one must ask how our beleaguered manager, Pedro Caixinha, wasn’t relieved of his duties the following day. The proverbial debacle from start to finish.

An epic match of see-sawing fortunes. 2-0 down then 3-1 down then 4-3 up before Murdo McLeod rattled one into the top corner to make it 4-4. McCoist kissed his boot when he celebrated his goal and debate raged over who had scored our fourth goal. Dave MacKinnon’s looping header was nudged in at the far post by Cammy Fraser. Some outlets awarded Fraser his second goal of the game, but the Rangers News credited MacKinnon. A fantastic frenzy.

The 182 goals have been shared among 104 different scorers. Among them are men that are part of Rangers royalty like Baxter, Greig, Johnstone, Parlane, Stein, Thornton, Wilson and Waddell. And there is an eclectic mix of nationalities too.

Among the 104 are 57 Scots, 12 Englishmen, four players who hailed from Northern Ireland, four from Holland (our current manager being one of them), three Danes (one of whom will always be referred to as Great), three Swedes, a couple of Croats, an American, an Australian, an Argentinian, an Algerian, a Belgian, a Canadian, a Colombian, a Finn, a German, an Italian stallion, a Jamaican and a Nigerian. And there’s also a wee South African winger called Johnny Hubbard who is the last man to score a hat trick for Rangers in an Old Firm league match.

The current squad at Ibrox is a league of nations, but will Sunday see Joe Aribo, Calvin Bassey, or Leon Balogun move alongside Sone Aluko as a Nigerian who has scored an Old Firm goal? Or will Ryan Kent or James Tavernier join the likes of Hateley, Steven, Drinkell and Walters as an Englishman who has breached the Celtic rear-guard at Ibrox? There’s also an opportunity for Aaron Ramsey to add ‘Welsh’ to the list of nationalities that have scored for Rangers in an Old Firm match at Ibrox.

It will come as no surprise that Ally McCoist leads the way when it comes to goals scored against Celtic at Ibrox. Ally is the top post-war goalscorer for Rangers with 27 Old Firm goals, and he has netted 10 of them against Celtic in the league at Ibrox. His first came in a 3-0 win in season 1985/86 and his last came in the thrilling 3-3 draw in season 1995/96.

But although Coisty grabbed a hat trick in the League Cup Final in March 1984 and the Glasgow Cup Final in May 1986, he can’t lay claim to a league treble against Celtic. In addition to ‘The Penalty King’, Mr Hubbard, there has only been one other Rangers player that has scored three times against Celtic in a post-war league fixture. That gentleman was the flame-haired Jimmy Duncanson who scored thrice in a 4-0 win on 1 January 1949.

In terms of the current squad, we have seven who have found the net against Celtic at Ibrox, namely James Tavernier, Filip Helander, Ryan Jack, Steven Davis, Kemar Roofe, Scott Arfield, and Alfredo Morelos.

Based on the above, we should be expecting a home win on Sunday. And recent form suggests that too. It’s now over two years since Rangers last lost a league game at Ibrox, and while Celtic’s away form has improved markedly, it’s not so long ago that they went eight away league matches without a victory.

There may have been a significant swing in points since the winter break, but Celtic have ridden their luck on several occasions. And aside from the pummelling at Parkhead, even the most critical Rangers supporter must reflect on the matches since the turn of the year and agree that while points were frittered away against Ross County and Motherwell, the other points dropped at Pittodrie and Tannadice were in matches where luck deserted us. On another day we would have won those matches with a bit to spare.

I see this match playing out like recent Europa League matches against Dortmund and Red Star. Gio van Bronckhorst will hopefully have his strongest XI on the field at midday on Sunday – for me, that’s McGregor, Tavernier, Goldson, Balogun, Bassey, Jack, Lundstram, Ramsey, Aribo, Kent and Morelos – which affords him the flexibility to change tactics and formation in game. We may well start 4-2-3-1 but we have seen on those epic European nights how seamlessly we can adapt to 3-5-2.

The trio behind Morelos can also interchange, with all three capable of either patrolling the wide areas or playing as a ‘10’. And we will have plenty in reserve to bring in if needs be, with the likes of Scott Arfield, Fashion Sakala and Glen Kamara likely to be on the bench.

April will either be awesome or abject for Rangers, there is no middle ground. Sunday kicks off a journey that will make or break the season, but on the proviso that lessons have been learned from the previous outing in the East End of Glasgow, I am confident that our push silverware won’t be derailed. By 2pm on Sunday only goal difference will separate the two teams……unless we win 8-0 of course!

Let’s don the battle fever and make a statement as the quest for 56 continues.