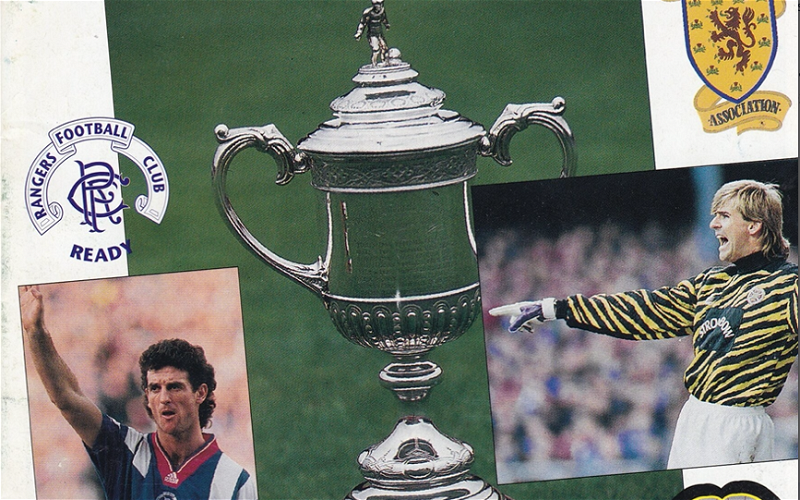 Saturday will be the thirty-second time Rangers and Hearts have gone head-to-head in the Scottish Cup.

Rangers’ record is as follows –

The first encounter was at the first Ibrox on 24 November 1894. Rangers were the Cup holders, but Hearts, who would end that season as league champions, eliminated them at the first hurdle. John Cowan, who had played for Preston North End and would later join Aston Villa, scored for Rangers. George Hogg and Johnny Walker were the marksmen for Hearts. Incidentally, Hearts also won at Ibrox on league business that season, 1-0 on 20 October 1894.

Rangers exacted revenge in the opening round in season 1898/99, winning 4-1 at home. That was the famed ‘Invincibles’ campaign in which Rangers won all 18 of their league matches, although Celtic won the Cup Final by two goals to nil.

The next encounter was significant for several reasons. Firstly, it was the first of four Scottish Cup Finals that Rangers have contested against Hearts, secondly it required a second replay before the sides were separated, and thirdly, the Cup win would be Rangers’ last for 25 years.

All three matches were played at Celtic Park. The first, on 30 April 1903, was played out in wintry conditions. James Stark gave Rangers the lead, but conditions deteriorated such that the match was stopped with 18 minutes still to play. Play eventually resumed, and when it did Bobby Walker netted an equalising goal for Hearts. Seven days later the two sides played out a dull 0-0 draw.

Rangers made two changes for the second replay – George Henderson and Alec Mackie replaced Neil Gibson and John Walker – and the admission prices were slashed to sixpence. Mackie opened the scoring after a quarter of an hour before Jock Drummond went off injured. Rangers were therefore down to 10 men, but they held firm and the great R. C Hamilton scored late on to seal the deal.

As luck would have it, the teams were drawn together in the opening round the following season too, Rangers winning by the odd goal in five, but it would be after World War One before the two sides met again in the Scottish Cup. That was in the third round in season 1921/22, Rangers winning 4-0 at Tynecastle thanks to goals from Cunningham (2), Dixon and McDermid.

A Jimmy Fleming hat trick hogged the headlines when the two faced off at Hampden in the last four on 22 March 1930. Bob McPhail netted Rangers’ other goal in a 4-1 victory. A single goal win for Rangers at Tynecastle followed two years later, and Fleming and McPhail were on the scoresheet again in February 1934 as Rangers edged a third-round replay by two goals to one at Tynecastle. The first match at Ibrox was drawn 0-0. And a replay was required to separate the teams again in season 1934/35 too.

Rangers met Hearts at Hampden in the semi-final, with the first match watched by a crowd of 102,661. Hearts had beaten Rangers 4-1 at Tynecastle earlier in the season, and the Rangers score that day, Torry Gillick, was the man that got the goal in the 1-1 draw at Hampden. Bob McPhail and Bobby Main scored the goals that won the replay 11 days later.

It would be another 18 years before Hearts and Rangers met again in the Scottish Cup. Once again it was a semi-final and once again Rangers were the victors. Derek Grierson and John Prentice scored the goals in a 2-1 victory. But Hearts were on the cusp of one of the most successful eras in their history, and they emphatically defeated Rangers in the Cup for the first time since 1894 when the sides met in the quarter-finals in season 1955/56. It ended 4-0 at Tynecastle – Alfie Conn, father of future Ranger and Barcelona Bear, Alfie scored one of the goals – but Rangers turned the tables the following season, winning 4-0 at the same venue thanks to goals from Hubbard, Murray, Scott and Simpson.

Rangers and Hearts were now vying for the top honours. Hearts won the league in season 1957/58 and season 1959/60, with Rangers coming top of the pile in the season in between. And in that season, they also eliminated Hearts from the Cup, winning a second round match on St Valentine’s Day by three goals to two.

The match came two months after a Max Murray hat trick and a brace from Ralph Brand had earned Rangers a comfortable 5-0 win in the league at Ibrox. But this one wasn’t so one-sided, although it would be a match the Hearts right-back, Bobby Kirk, would want to forget. He was up against Andy Matthew, and the Rangers outside left broke the deadlock after six minutes. And although Jimmy Murray equalised, Kirk edged Rangers ahead when his attempted clearance spun beyond his own goalkeeper. Matthew scored his second three minutes after the restart when he pounced on Kirk’s poor clearance to score, and that was enough to see Rangers through even though Johnny Hamilton scored in the dying seconds for Hearts.

The pair then traded victories in 1968 and 1969 – Hearts winning the 67/68 quarter final 1-0 after a replay while Rangers won 2-0 at Ibrox the following season – before meeting in the Final on 1 May 1976. This was the match that infamously kicked off a couple of minutes prior to the traditional 3pm kick off which offered Derek Johnstone a place in the history books. DJ did what DJ did and leapt above the Hearts defence to open the scoring after a mere 41 seconds and had thus netted prior to 3pm. Another goal from Johnstone and strike from Alex MacDonald earned Rangers a 3-1 win in front of a crowd of 85,354, and completed the domestic Treble for the third time in their history.

A goal from Colin Jackson and a Sandy Jardine penalty broke Hearts the following season at the semi-final stage before John Greig’s side blew Hearts away in the last eight in season 1979/80. John MacDonald scored twice, and further goals from Jardine, Cooper, Russell, and Johnstone earned an emphatic 6-1 victory at Ibrox.

A fiery 3-2 Hearts win followed in season 1985/86 – Derek Ferguson was ordered off for Rangers – before goals from Dave McPherson and Ally McCoist took Rangers through the Final in season 1992/93. McCoist’s lob over Nicky Walker would be his forty-ninth and last goal of a prolific season.

That semi-final at Ibrox was the first of four meetings in the Scottish Cup in successive seasons. Rangers won 2-0 at Ibrox in season 1993/94 but aided by goals from former Rangers players Colin Miller and Dave McPherson, Hearts won 4-2 at Tynecastle the following season. Jim Bett and David Hagen were the other ex-Rangers players in the Hearts starting XI that afternoon. But Rangers emphatically exacted revenge when the two sides contested the Final in 1996.

It was a day on which Gordon Durie scored a hat-trick yet didn’t get man-of-the-match. That accolade went to Brian Laudrup, the Great Dane turning in a mesmerizing performance that included two goals and three assists. Laudrup was magnificent for Rangers during his four-season stay in Glasgow, but his display at Hampden that afternoon was undoubtedly his finest in a Rangers jersey. He was unplayable.

An era ended when the sides next met two years later. Seven days after hopes of 10-in-a-row ended, the opportunity to end Walter Smith’s first tenure as manager with silverware were dashed when Hearts won the Cup Final at Parkhead. A controversial penalty was awarded in the opening minute – Colin Cameron converted – and Stephane Adam made it 2-0 seven minutes into the second half. A late rally stimulated by the 355th goal of Ally McCoist’s Rangers career couldn’t muster an equalising goal and the first Smith era ended without a trophy, the first barren season since 1985/86.

Remarkably, the clubs have only faced each other twice since then in the Cup. Rangers won comfortably in the last eight of the 1999/2000 competition – Ferguson, Numan, Amoruso and Dodds (penalty) earning a 4-1 win at Ibrox – and the last encounter came in season 2019/20. Hearts won that one 1-0 at Tynecastle as a season that had promised so much prior to the winter break continued to unravel for Steven Gerrard’s ragged Rangers side.

The hurt and anguish of the Europa League Final defeat is still lingering, but the players have one last opportunity to deliver silverware. The Scottish Cup has been absent from the Ibrox Trophy Room for too long, 13 years to be precise. It’s time to bring it back, and if we do then that would be a fitting end to a season when the players have given us so much at home and abroad.

Make us dream and make us proud as the quest for Scottish Cup glory continues.