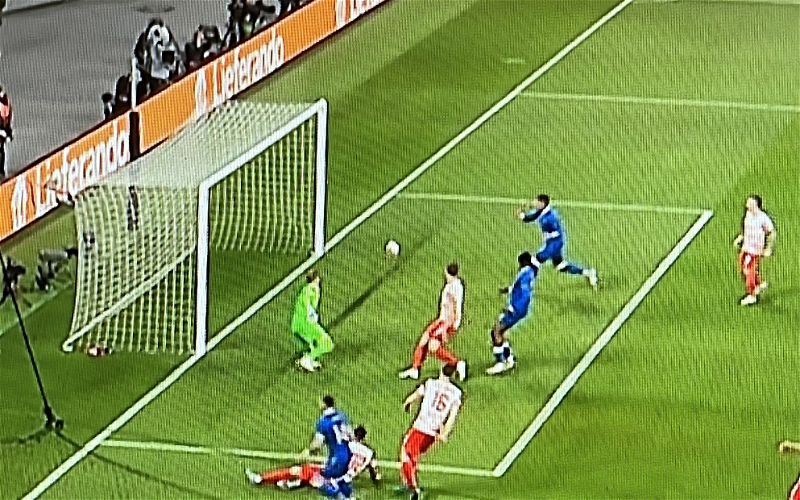 Circumstances dictated that I couldn’t be present in Leipzig, so I had to be content with a watching brief on BT Sport 2. With the dulcet tones of Hamilton, McCoist and Craigan in the background, I settled into the armchair to hopefully witness Rangers keeping their hopes of becoming the second team in our 150-year history to win a European trophy alive.

After making wholesale changes for the weekend win over Motherwell, Gio van Bronckhorst brought most of his first-choice players back for this one. However, Scott Wright, impressive in the second half on Saturday, kept his place in what looked like a 3-4-3 formation that offered flexibility to go 5-3-2 when defending. Unfortunately, the former Aberdeen man offered little in a disappointing display.

The opening 15 minutes were a cagey affair, with both sides feeling each other out. But it would be RB who carved out the first opening a minute later. The home side tried to capitalise on an error from Barisic, but their principal threat in the forward areas, Christopher Nkunku, took a poor touch. He eventually got his shot away, but it was superbly blocked by Bassey. And a couple of minutes later, Goldson, who had an excellent game, had to be alert to slide in and thwart Konrad Laimer as he looked to make inroads towards McGregor’s goal.

With RB looking confident and assured, Rangers needed to weather the storm, but Wright, who should be an outlet for a hard-pressed defence, was surrendering possession too often. And when they did have possession, RB were closing Rangers down and not affording them any time on the ball.

From the gantry, Stephen Craigan took time to talk about the Rangers players ‘slipping and sliding’ on the surface, suggesting that not training on the pitch the night before hadn’t allowed them to select the appropriate footwear. He was quickly shut down by McCoist, though, who suggested that irrespective, the pitch may have been watered prior to the game.

Despite the couple of openings that had required blocks from Bassey and Goldson, as we reached the midway point of the first half, Rangers were containing the threat posed by the home side. I must agree with Ally McCoist in the respect that we were poor in possession, but we were defending stoutly and keeping RB at arm’s length. John Lundstram, at the heart of the back three, was a commanding presence.

Just shy of the half hour, Rangers won the first corner of the match as Wright tried to wriggle clear. The delivery from Barisic was decent, but Goldson couldn’t steer his header from the penalty spot on target.

There was a bit more positivity about Rangers, but it took two key interventions from James Tavernier to keep the scores level. Barisic was caught again, and Tavernier did superbly to get in a header that prevented the ball reaching Nkunku. The ball fell for Angeliño, but his goal bound, rasping drive was blocked by the captain. It was a timely intervention, and in the next phase of play, he burst to other end, but with limited service ahead of him, possession was lost. You could sense the frustration, as the three forward players, Aribo, Kent and Wright, needed to be offering more options than they were.

Another burst forward from Leipzig after 35 minutes saw Laimer fizz the ball across the face of goal, but there were no takers in a red-and-white jersey. Stephen Craigan commented at that stage that we hadn’t ‘imposed ourselves and were giving too many frights at the back’. It was, however, still 0-0.

There had been a general hubbub of noise since kick off, but as the half ended, you could hear choruses of ‘Gio, Gio’ above it all as Rangers looked to see out the half without shipping a goal. And they were buoyed by a couple of loose passes from the home side, which suggested all was not well in the home camp as the French referee, Monsieur Bastien, drew the first 45 minutes to a close.

It had admittedly been ragged from both sides. Rangers didn’t seem to have an out ball and had only 26% possession, but despite a couple of openings, RB hadn’t forced McGregor to make a save. Neither side had had a shot on targe either, and the only corner had gone to Rangers.

‘So far, so good’, said Rory Hamilton, and memories of a similarly stoic display in Florence in 2008 sprung to mind. The question was, would Rangers deliver a sucker punch in the second 45 minutes?

There were no changes at half time, as Rangers kicked off, going right to left based on the vantage point of the Rangers bench. And immediately you sensed there was something different about Rangers. They were more aggressive and moving Joe Aribo to the focal point of the attack was significant. And that forward facing approach almost earned Rangers the breakthrough three minutes into the second half.

RB were swarming forward, but Rangers broke. Superb play from Kent saw him wriggle free on the left, but his shot went wide of the far post. Tavernier, coming in at the far post, should perhaps have gambled the same way he did when he opened the scoring against Braga at Ibrox. But it was much better from Rangers nonetheless, with Craigan suggesting the tactical switch had given ‘Rangers an injection of confidence’.

Moments later, Aribo won a free kick, and from Goldson’s ball forward, Wright did well to dig out a cross. Aribo rose well and teed up Tavernier, but his shot was deflected for corner. Goldson’s header from Barisic’s delivery didn’t trouble the goalkeeper, but overall, it was much better from Rangers.

After 53 minutes the first shot on target was registered. Nkunku shot from distance, but it was straight at McGregor and the veteran goalkeeper dealt with it. In the opinion of our greatest-ever post-war goalscorer, it was ‘a save you would expect your goalkeeper to make’.

Rangers may have had a bit more attacking endeavour, but the ball still wasn’t sticking in forward areas. That invited RB to press forward again and for a spell according to Hamilton, ‘Rangers [couldn’t] get a touch’. Ryan Jack eventually recovered possession when he robbed Nkunku, with McCoist in disbelief that Nkunku hadn’t returned the pass he had just received.

Scott Wright then came in for some criticism. He was the ‘Achilles heel’ according to Craigan, but changes were afoot, with Fashion Sakala getting ready to come on as Rangers enjoyed a good spell of possession. The difference, according to the commentary team was Joe Aribo. He had ‘reinvigorated Rangers’ in the opinion of Craigen, while McCoist opined that that was because he knew ‘how to play the position’.

After Laimer’s shot dribbled into McGregor’s arms, there was a brilliant challenge on halfway from Bassey. How has the Nigerian youngster wasn’t shortlisted for PFA Scotland Young Player of the Year is a mystery. He has grown in stature this season and is now one of the first names on the teamsheet.

Sakala eventually joined the fray after 68 minutes. He replaced Wright and took over from Aribo through the middle, with Joe moving out to the right. And within minutes, the latter broke forward, but a heavy touch prevented him from getting a shot away from long range.

Play then swung to the other end and Nkunku missed a sitter. He nicked the ball past McGregor, and although he was forced wide, he should have done better than firing wildly wide of a gaping goal. While admitting that Nkunku should have scored, McCoist was effusive in his praise of the role Allan McGregor played in denying the RB striker a goal.

With 15 minutes to go the question now was, should Rangers take a chance? Craigan felt that RB were ‘a little bit unnerved’ and had had a ‘few moments of sloppiness and laziness’, while Rory Hamilton reckoned ‘Rangers need[ed] to be praised for their defensive discipline’.

Jack had a half chance after 78 minutes, but fired harmlessly wide, before the supposedly deadly Nkunku rose above Bassey only to fail to hit the target with his header. Bassey again did his job superbly to subdue Nkunku’s threat.

As the game entered the final stages, Arfield came on for Jack, and Sands was introduced too for Aribo. It appeared Rangers were content to try and keep the scoresheet blank. Alas, it wasn’t to be.

With five minutes to go, Adams cut inside, and his shot was saved by McGregor. And from the corner, Craigan suggested Ryan Kent had been guilty of ‘ball watching’ as Angeliño rattled a left foot volley into the corner of the net.

We were told it was the former Manchester City man’s first goal in Europe since he had found the net in a 3-2 win for City over Man United in December 2020. It was a stunning strike, but even the RB manager admitted after the game that Angeliño would hit a shot like that 10 times, and only scored twice. And footage suggests that the goal perhaps shouldn’t have stood, as there were a couple of RB players in an offside position and in McGregor’s line of sight.

Rangers didn’t look like equalising, but during the three minutes of additional time, Goldson and Tavernier were booked.

In summary, I don’t think Rangers have anything to fear ahead of the second leg. We may have Roofe and Ramsey back, but even without them, there is every chance we will overturn this deficit. Ibrox will be once again defying decibel levels, and we were in the same position after the first leg in Braga in the previous round and roared back at Ibrox to win.

This isn’t over. The quest for sunny Seville and Europa League glory most certainly continues.