Roofe will lead the line very well at Ibrox 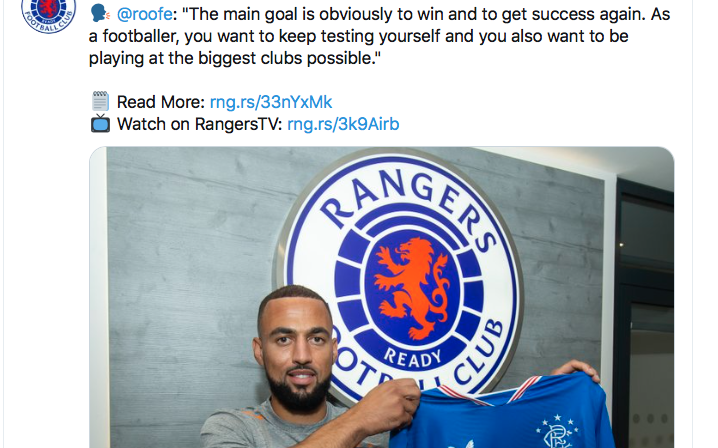 Following confirmation of Kemar Roofe’s four year deal, for an undisclosed fee, at Ibrox, the former Elland Road fans favourite has been tipped to be a success for Rangers. Obviously, Roofe has made the move from Anderlecht in Belgium but it was during his spell in the English Championship with Leeds that he really came to prominence and Urquhart was well placed during this time to give his view on the player.

When asked about Roofe and his background as a player, he responded, “Kemar came to Leeds back in 2016 from Oxford United and it would be fair to say that it took some time for him to really establish himself. Initially, he was behind Chris Wood in the pecking order as he struggled to secure his spot in the team. This pattern continued for much of his first two seasons at Leeds.”

Looking back now, it is clear to see that the arrival of ‘El Loco’ at Elland Road was a catalyst for Roofe to propel his career and reputation, this is something that Urquhart was keen to back up, “When Marcelo Bielsa came in, that’s when it changed for Kemar. The manager liked what he saw, he showed faith in the player and it was as if he told him, you are my main striker now. Roofe had a great season, he was a key player and showed his worth”

The West Brom academy graduate picked up some injuries during the 18/19 season, something that also happened to Patrick Bamford which meant that they were not always both available for selection as The Whites came just short in the playoffs, falling to Frank Lampard’s Derby County.  Despite setbacks, a very decent return of 15 goals and 2 assists meant that Roofe had attracted many admirers, leading to a move in the following Summer to Anderlecht. In an injury plagued season in the Belgian capital last term, he registered a return of six goals in 13 appearances.

Born in Walsall, of Jamaican heritage, Kemar Roofe (27), is now in that phase of his career considered to be approaching his peak. Steven Gerrard will be hoping that this will be reflected in his goal return at Ibrox and Joe Urquhart believes that the player now has the attributes and the know-how to make the grade at Rangers. “Roofe has the experience from Leeds where there was a demand for promotion to the Premier League and the expectations that come with it. He also had his time in Belgium last season with the experience that comes from moving abroad and a different type of football. At a big club like Rangers, there is massive expectation but I think Roofe will be a good fit.”

Given the situation around Alfredo Morelos, FF asked if Roofe has what it takes to be the focal point of Rangers attack, Urquhart responded, “Yes. When I first heard of the link to Rangers, I thought that could work. He (Roofe) will lead the line really well, he will run and run, press defenders and he is a natural finisher. Kemar has that knack of being in the right place at the right time that not all strikers possess. I see him being Gerrard’s type of player as he has a focussed mentality and belief in himself. He is a grounded person, so I don’t foresee any problems at all off the pitch.”

Time will tell how this move unfolds, but it is an exciting signing which shows the calibre of player that is being targeted in what is shaping up to be a defining season for Steven Gerrard’s Rangers. Hopefully we will see the best of Roofe at Ibrox with many goals to come.

Thanks to Joe Urquhart at the Yorkshire Evening Post. @JoeUrquhart_