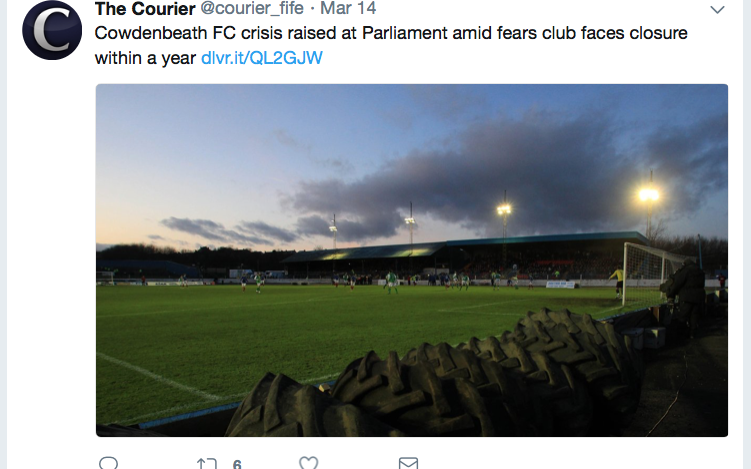 Over the years Follow Follow has stretched out the hand of friendship to fans fighting to save their clubs.  For instance, when Livingston and Dundee fans were up against it we used our firepower to support their raffles, auctions and social events – Dens Park had a bar area open for use when Rangers visited Tannadice for instance.   Some of us even turned up a bit early to lend moral support to a march led by Gary MacKay against the Pieman at Tynecastle.

Rivalries aside, there is a fellow feeling amongst fans – an interest in stories of how clubs started, the culture they have, their struggles and successes.   In Scotland we all benefit from how football mad the country is – even compared with Italy, England, Germany and Spain this neck of the woods has an incredible level of support and participation. Most of us have a favourite English or foreign team we keep an eye on.   I’ve always had affection for Clydebank due to a group of us from school going to Kilbowie on Saturday or midweek when Rangers were away from home.

In recent months Hartlepool fans have been struggling against incompetent owners – a Rangers supporters club in East Kilbride donated £500 to help them, Bears turned up in good numbers when we had a spare Saturday to boost their home crowd, I’ve fired a few articles onto the messageboard and gotten a good response – it’s a natural thing to want to help.  If you are a real football fan.

For Scottish clubs in difficulty we now, sadly, must play by different rules taking into consideration the behaviour of both fans and clubs in recent years towards the plight of Rangers – the result of a noxious combination of stupidity and criminality practised by directors and others.   How many times, before and since, have we heard media voice say of clubs in crisis “you can’t blame the fans.”  Yet for Rangers those voices were noticeable by their actions.

I’m neither a crybaby nor naive.  Big clubs like Rangers, Ajax, Manchester United and Juventus attract hostility because of their success.  It’s a fact of life.   What I do expect is that those charged with the governance of the game execute their duties in a fair and impartial manner.  In this Scottish football failed miserably and it will haunt the game for decades to come.

Examine the behaviour of clubs like Inverness Caley, Dundee United and Raith Rovers.   For the first time in their lives directors of these clubs said they would listen to their fans on issues surrounding Rangers – some would be guided by opinion polls.   It would be the first and last time any of these reprobates listened to their own fans.  A never to be repeated offer designed to satisfy  the vilest slobbering of activists mostly motivated by hate.  The wretches in charge of these clubs hid behind the petticoats of monsters rather than having the courage of their own prejudices.  You can forget them actually showing leadership and fighting for a fair application of the rules.

So what now are the lessons for Scottish football when one of our traditionally more successful clubs, Dundee United and a perennial struggler, Cowdenbeath, hit the skids?    Will the constitutions, laws and articles of association be applied with the same scrupulousness as pertained to Rangers?   Or will that ‘learning process’ mean they are let off the hook when the bills stop being paid?

We learned yesterday that the SFA has yet to approve Alastair Johnston as a Rangers director – he was appointed on 5th June last year – it hardly fills you with hope for the future when this lack of administrative ability is on such open delay.  Especially when AJ was one of the most vociferous whistleblowers with regards to the behaviour of David Murray and Craig Whyte.

I don’t expect Rangers fans to do a cut-price impersonation of the hordes of cranks quoting bye-laws and their somewhat flawed knowledge of company law which accompanies our travails.  It’s not what normal people do.

What Scottish football now has to do is to apply their rules to the letter – not in the spirit.  Not be guided by sportsmanship or fairness or common sense.  That has gone out of the window, it was good enough for us.  It’s good enough for everyone else.

I’ve spent a few decent days at Cowdenbeath – SM and I having a ball of a time about a decade ago at – I kid you not – an East Stirling game.  The wee man getting Jim McInally to sign a programme in the car park and trying to auction it for charity on the website come the Monday!

Years ago I would have offered what help I could to their fans – now I’m not prepared to do that and go through the hassle of having to double guess what some Cowden crank said five years ago or which director was in such and such a meeting.   The hate-mongers have poisoned Scottish football, not just for us, mostly for themselves.