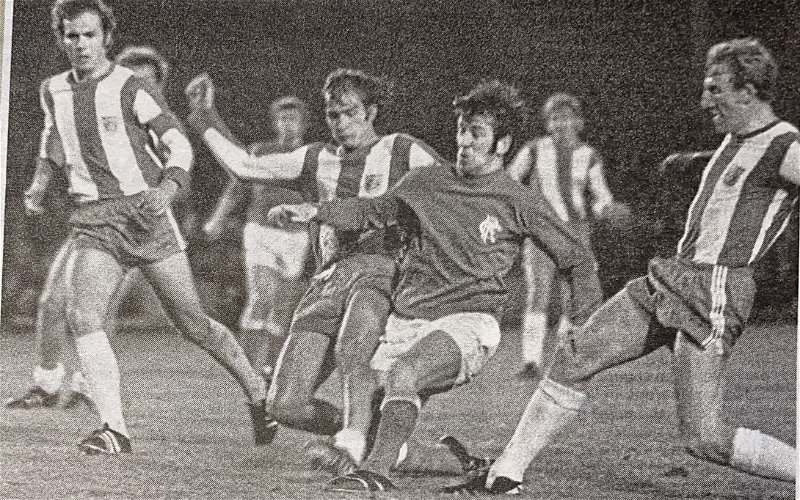 Rangers have faced opposition from several countries on their European travels, but at the top of the list is Germany. Since our first encounter with German opposition, Eintracht Frankfurt, in season 1959/60, we have faced 14 different teams from either West Germany, East Germany or the now-unified Germany. That amounts to a total of 56 matches of which Rangers have won 19. Seventeen have been drawn and 20 lost.

It should be noted ahead of RB Leipzig’s visit to Ibrox on Thursday that 14 of the Rangers victories have come in Glasgow, while only four teams have left with a win. Those teams are Eintracht Frankfurt, VfB Stuttgart, Bayer Leverkusen, and the German team we have faced the most, FC Bayern Munich.

We have faced the Bavarian behemoths nine times, but this article will look at the first five duels that took place over a period of five years between May 1967 and April 1972.

When Rangers met Bayern in the Final of the European Cup Winners Cup in May 1967, Bayern were not the successful entity we know of today. They were, however, in the embryonic stages of becoming a dominant force.

The Bundesliga, a title Bayern have now won for the last 10 successive seasons, had only been born at the start of season 1963/64. Indeed, Bayern’s status at the time was such that they didn’t make the cut for the inaugural campaign. Instead, they ended up in the lower leagues, specifically the Regionallia Sud, and it would be season 1965/66 before they were made their debut in the top flight.

Bayern hadn’t fared much better in the national cup, the DFB-Pokal, either, winning it only twice. The latter success in season 1965/66, earned courtesy of a 4-2 win over MSV Duisburg in the Final, earned them a crack at the European Cup Winners Cup.

The Bayern team that did the ‘Pokal’ contained what would soon be referred to as ‘the axis’ of Sepp Maier, Franz Beckenbauer and Gerd Muller. Beckenbauer had scored one of the four goals in the Cup Final, and those three names would weave a common thread between the first five ties between Bayern and Rangers too.

The Rangers side that Bayern faced in Nuremburg was one that was coming to the end of era. The great Symon side of the early 1960’s was starting to break up. Baxter, Brand, Caldow, Ritchie and Shearer had already gone, Forrest and McLean had been cruelly jettisoned after the humiliating Scottish Cup defeat against Berwick Rangers, and Millar and Wilson were only playing bit-part roles.

Wee Davie should have had a swansong, though. Symon went into the Final without a recognised number nine and opted to play Roger Hynd. He was essentially a half-back but had scored four goals in a reserve match against Dundee prior to the semi final against Slavia Sofia. That was deemed sufficient to warrant a starting place in game of this magnitude.

Hynd’s inclusion in the final XI was an error of judgement. What made it even more alarming was the fact that Wilson, still only 28, was in the squad that travelled to Germany yet wasn’t selected. He had played several times at centre forward for the club, famously scoring six goals in one match against Falkirk on 17 March 1962. Why Symon overlooked what was staring him the face remains a mystery.

The game was settled in extra time by a goal from Franz Roth. Rangers had enjoyed lots of the ball – ‘at least 75% of the play’ according the Glasgow Herald’s ‘special correspondent – but had not mustered much in the way of openings. And when they did, after 33 minutes, it was missed by stand-in striker, Hynd. A sharper forward-thinking player would almost certainly have beaten Maier from six yards out.

‘The Rangers forwards alone have put their club in this place of shame today’, opined Gair Henderson of the Evening Times, an opinion backed in the wake of the match by the Rangers chairman, John Lawrence. He once again bemoaned what he perceived as deficiencies at inside-right, centre-forward and inside-left, and although Symon survived and was treated shabbily when he was eventually dismissed, his selection in the forward areas against Bayern may well have been the proverbial straw that broke the camel’s back.

Since their last encounter the winds of change had blown through both clubs, yet Rangers had regressed while Bayern had progressed.

In Glasgow, Symon had been unceremoniously relieved of his duties, only for his predecessor, Davie White, to falter further in the pursuit of Celtic. The board had turned to Willie Waddell to steady the listing ship, and the first leg of this tie in Munich was the eleventh match of his first full season in charge. Rangers had started well too, winning seven and losing just one of those matches. The defeat had come four days before the trip to Germany, a 2-0 reverse against Celtic at Parkhead.

Getting better and better was the mantra emerging in Munich. They had pushed on after the Cup Winners Cup win and won the Bundesliga and DFB-Pokal double in 1968/69. They still had ‘the axis’ and Nuremburg hero Roth, but they had added more quality and injected some youth too. They also had a new coach. Zlatko Čajkovski had been replaced by Branko Zebec in July 1968, but despite leading the club to that first-ever league and cup double in Germany, Zebec was replaced Udo Lattek in March 1970.

For Rangers, there were only five survivors from the vanquished XI from Nuremburg. Sandy Jardine, John Greig, Ronnie McKinnon and Willie Johnston were the only ones still in the starting XI, while Willie Henderson who had started in the Final was on the bench in Munich. For ‘Roger Hynd’ you could now read ‘Colin Stein’ and the likes of Alex Miller and Alex MacDonald were also listed.

Rangers returned from the first leg trailing 1-0, Beckenbauer scoring after 21 minutes. Yet Rangers could and probably should have avoided defeat. John Greig rattled the bar, and Maier in the opinion of Jim Parkinson in the Glasgow Herald ‘stressed convincingly why he is Germany’s No. 1 goalkeeper’. As for the third element of the axis, Muller, he had been superbly nullified by Ronnie McKinnon.

It looked to be advantage Rangers. Willie Waddell was clearly impressed with the first leg display as he named the same starting XI a fortnight later. But his side were undone by a moment of controversy. With the game still finely poised at 0-0 on the night with 10 minutes to go, the Swiss referee appeared to award Bayern an indirect free-kick. Muller stepped forward and bent a shot round the wall and into the net via the post. However, rather than disallow the goal, the referee allowed it to stand despite the protests from the Rangers players. Colin Stein’s goal moments later was nothing more than a consolation.

The last time German opposition came to Ibrox to contest a European semi final against Rangers was half a century ago. And having huffed and puffed against them in four previous duels, it was perhaps fitting that passage into the European Cup Winners Cup Final in 1972 came when our heroes most certainly blew the star-studded Bayern Munich house down.

Rangers had come home from the first leg with a creditable 1-1 draw – Paul Breitner’s goal for the hosts being cancelled out by a Rainer Zobel own goal – but the loss of John Greig, injured in the Scottish Cup semi-final the weekend prior to the second leg – was a hammer blow. Like Beckenbauer, Maier and Muller, Greig had been a common ingredient thrown into the mix in the previous Bayern battles, and the loss of his presence and influence could have been a defining moment.

The fact it wasn’t was down to another show of faith in youth by Willie Waddell. Eighteen-year-old Derek Parlane was handed Greig’s number four jersey, and he was one of five changes from the team that had faced Bayern in Glasgow the previous season. Ronnie McKinnon was ruled out with a broken leg, but Dave Smith, who had also played in 67, was back, Willie Mathieson replaced Alex Miller at left-back, Tommy McLean, signed from Kilmarnock the previous summer, came in for Graham Fyfe, and Derek Johnstone, on the bench in the Fairs Cup tie, was promoted to the starting XI.

For the visitors, there was consistency in selection. Nine of the XI from the previous match at Ibrox took to the pitch again – Maier, Beckenbauer, Schwarzenbeck, Hansen, Koppenhöfer, Zobel, Breitner, Roth, and Müller – with one of the two changes being the inclusion of Uli Hoeness, another youthful piece of the jigsaw of success that Lattek was building.

It looked to be a foregone conclusion, but Rangers hit the front after only two minutes. Sandy Jardine, another who had featured in each of the five matches, cut inside and fired a left foot shot towards goal. Maier seemed to misjudge the effort and the ball nestled in the net. 80,000 were in utopia, and before half an hour had elapsed, young Parlane had made it 2-0. Bayern’s big-hitters were rattled and never recovered. Rangers were through. A similar result on Thursday would do very nicely!

After four failed attempts, Rangers had beaten Bayern. Both teams had evolved since the first meeting, but a core remained in each. Maier, Beckenbauer, and Muller would be pivotal for Bayern who were on the cusp of an era that would deliver huge success at home and abroad. Rangers would have their own trophy triumphs, albeit only on home soil, and Jardine and Greig would be key components in those successful sides.

To further emphasise how magnificent the achievement of beating Bayern in 72 was consider:

Since those encounters, we’ve faced Bayern twice. We were outclassed in the opening round of the European Cup in season 1989/90, losing 3-1 at Ibrox and drawing 0-0 in Germany, but it was much closer in the Champions League group stages 10 years later. It took a very late, heavily deflected Michael Taarnat free-kick to earn Bayern a draw at Ibrox, and in Munich, Rangers dominated for the most part – we hit the woodwork three times – only to be edged out by a single goal scored from the penalty spot by Thomas Strunz. Our current manager will not wish to be reminded that it was he who conceded the penalty for a foul on Mehmet Scholl!