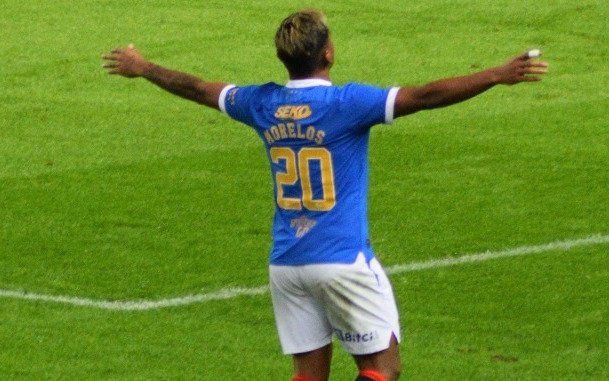 A hangover is usually something you wake up with after being over inebriated after consuming copious amounts of intoxicating liquor on a memorable night out. It’s a painful moment but made worthwhile by what had gone before. But the hangover the members of the Rangers family experienced when they awoke on Thursday morning did not follow such a pleasurable experience, and no bizarre concoction of raw eggs, vinegar, hot sauce, salt and pepper (this incidentally is the recipe for the traditional hangover cure called the prairie oyster) could rid them on this one. It lingered long, and the insipid, lacklustre display and meek surrender from midweek was still being talked about at length in the concourses and stands in and around Ibrox before kick off in this one.

But the important thing when you get knocked down, is that you get right back up again, and Rangers had the opportunity to do that when they welcomed Hearts to G51. Unsurprisingly there were changes to the Rangers starting XI, four in total. There was a welcome return for Ryan Jack, one of the few to get pass marks against Celtic, and Leon Balogun came in at centre back. Glen Kamara and Borna Barisic made way, two players who hadn’t covered themselves in glory in the previous game. Up front the much maligned but much missed Alfredo Morelos was back from an inactive international duty – Kemar Roofe took a place on the bench – but the biggest talking point was the inclusion of John Lundstram.

The Liverpudlian has impressed in fits and starts this season but had rarely featured under van Bronckhorst, playing a total of just 83 minutes in the 12 league matches that have been overseen by the Dutchman. His last start had come in the Scottish Cup tie against Stirling Albion, but you had to go back to 7 November for the last time he had featured from the off in the Premiership. It was a brave move from the manager, but it more than paid off. Lundstram, who was alongside Jack in a reshuffled middle of the park that had Aribo, Arfield and Kent forming the trio that sat behind Morelos in a 4-2-3-1 formation, was magnificent, delivering a marvellous display that was full of vim and vigour.

Hearts came into the match on a good run of form. Since losing to Rangers at home in December, they had won four and drawn one of the six league matches that followed. The side selected by Robbie Neilson showed two changes from the one that battled out a dour 0-0 draw earlier in the week with Hibernian, former Ranger Andy Halliday and Ellis Simms dropping to the bench to make way for Aaron McEneff and Alex Cochrane. That meant no place for Craig Halkett or Rangers-bound John Souttar. Halkett was ruled out with a hamstring injury, while Souttar was still nursing an injured ankle.

It was bitterly cold when Alfredo Morelos got us underway, but despite the midweek malaise there was a fantastic turnout of 49,708. There was naturally some apprehension in the air, but that soon passed. Rangers were simply irresistible from start to finish.

They could have been ahead inside first minute. A long ball from Allan McGregor travelled over the head of Sibbick. Morelos was in on goal, but the ball was cleared for a corner. The delivery from Tavernier was headed towards goal by Aribo, and after his effort was cleared for a second corner, the skipper picked out Balogun, but he couldn’t keep his header down.

The high intensity start continued and after five minutes, Arfield swept the ball wide for Kent who danced into the penalty area. The English winger cut inside on to his right foot and bent a shot that curled just wide of the far post. Morelos, stationed at that far post, was a yard or so away from a tap-in.

There was a moment of slackness from Goldson shortly after that – he scuffed a pass back and Boyce almost capitalised – but that was a brief respite for Hearts. And after 11 minutes, Rangers hit the front with the first of five fantastic goals.

Calvin Bassey, who was superb at left back, played a defence splitting pass through to Kent. He scuttled to the bye-line and fizzed the ball across the face of goal allowing Morelos to slide in at back post to score. The Colombian has been sorely missed lately and he was unplayable for the full 90 minutes, thoroughly deserving his man-of-the-match award.

Rangers were relentless and could have been further ahead when chances fell to Aribo and Kent. The former was released by a first-time pass from Arfield on the left-hand side of the box, but he tugged his left foot shot wide of the far post. Kent did likewise after a wonderful piece of interplay with Morelos. Kent played a pass with the outside of his boot to Morelos and continued his run. The Colombian played a lovely reverse pass into Kent’s path, but after cutting inside again, his curling shot shaved the post.

The attacking play from Rangers in the opening half hour was a joy to watch, but their work ethic without the ball was a feature too. Each and every player was hunting the opposition down all over the park and snapping into tackles. The hunger we all wanted midweek was back with a vengeance. This was the response the fans were looking for from the players and there was a zip and a zest about Rangers’ play.

Nobody typified the return to form more than Morelos, and he almost doubled Rangers’ lead six minutes before the interval. He linked well with Tavernier part of which was an outrageous flick, and his shot was somehow turned away for a corner by Gordon.

The absence of the second goal was the only issue in a fantastic first half. And there were warning signs that a drop in concentration and taking the eye off the ball could lead to a route back in for Hearts. For example, but for a timely intervention from Goldson to deny Cochrane they could have been level at the break.

The visitors started the second half brightly too. In the opening minute, a ball to the far post was met by Atkinson but he fired his shot across the goal and wide of target. And a couple of minutes later, Devlin should have profited from a moment of slackness from Bassey, but although his lob beat McGregor, the ball dropped narrowly wide.

That action got the crowd a little disgruntled, but the grumbles gave way to howls of disgust from the when Balogun was booked for winning the ball. Minutes after a Hearts player escaped unpunished for a challenge from behind on Jack, Balogun slid into challenge Boyce, winning the ball in the process, However, referee Willie Collum awarded a free kick and booked the Nigerian. It was one of a number of baffling decisions from Collum throughout the match.

That seemed to shake the early second half lethargy out of Rangers and after 64 minutes they scored a sumptuous second goal. Jack played the ball into Morelos who turned and got a sight of goal. He tried to play in Arfield, but when the ball broke back to him, he curled a stunning shot into the net with his left foot.

The ravenous Rangers from the first half were now back. After 68 minutes, Morelos was in on goal for his hat trick, but his shot was blocked by Gordon, and there was no respite for Hearts when Jack, who had put in a superb shift and bossed the midfield, was replaced by Glen Kamara. The Finn’s input was immediate with interventions at both ends of the park.

Firstly, he blocked a shot from McKay after McGregor’s initial save from the former Ger, and he then netted a rare goal to make the points safe. He was involved at the start of the move, playing the ball Aribo who subsequently fed the ball to Morelos. His beautiful pass played Kamara in on goal, and he showed great composure to check back onto his right foot and stroke the ball into the net.

It was now time to relax, and it looked like Aaron Ramsey was all set to come on for his debut. But before he did, Rangers had scored a fourth goal. It was the culmination of another wonderful spell of play too. Scott Arfield was released by a lovely reverse pass from Kent, and after his initial effort was saved, he rattled in the rebound.

The goalscorer was Immediately replaced by Ramsey, and Fashion Sakala also came on for Aribo. Moments later there was a memorable moment for one of our own too. Liam Boyce was withdrawn, and Andy Halliday came on. A great servant and part of the journey back to the top, Halliday was given a rousing reception and a rendition of the song that had been sung about him when he wore a blue jersey.

All that was left now was for Morelos to complete his hat trick and Rangers to add more goals. The Colombian would be frustrated in his treble attempts, but the home side did score again, and it was another belter. The spadework was done by Kent with a run down the right, and when he cut the ball back for Sakala, the Zambian took a touch and stroked the ball home.

There were further changes after that with Davis and Amad introduced for Lundstram and Kent. The latter has been criticised recently, but credit where credit is due, he was superb and back to his best in this one.

Make no mistake this was a massive result and statement of intent from Rangers. It answered a number of the questions that had been posed after losing to Celtic. But this is now the benchmark for the final 13 league matches. It showcased the capabilities of this squad and emphatically showed that they have the hunger and desire to fight for the title.

In two matches we have gone from one extreme to the other. We hope that on Wednesday night against Hibernian that it’s the higher end of those that are reached again.

After a wee wobble, the quest for 56 is firmly back on track.