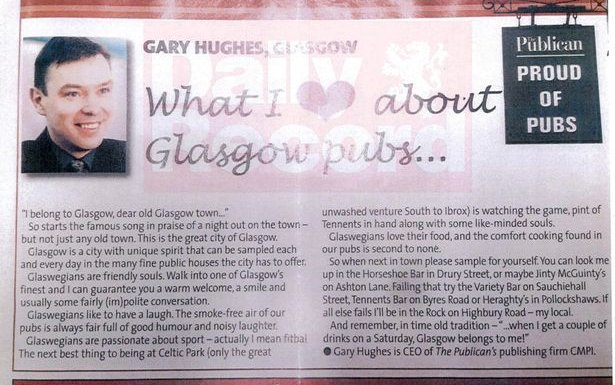 The revelation of an article in The Publican magazine written by SFA director Mr Gary Hughes (published 28 August 2006) in several news outlets today, includes the description by Mr Hughes of Rangers fans as “the great unwashed.”  Such a juvenile observation by someone in his office which has a remit of corporate governance would normally have seen him removed.

The article was published when Mr Hughes was Managing Director of CMPi, a division of United Business Media, which then owned the magazine.

What followed was even more concerning as the SFA itself became party to a cover-up.  Upon discovery of the article by a member of their media team the SFA alerted Mr Hughes to the fact.

It is widely believed inside the SFA that William Reed Business Media, who were the new owners of the magazine, were subsequently contacted.  The offending article was removed from the website.  The Google listing for the article was also deleted.

This raises the issue of which SFA office-bearers and staff knew of the cover-up; and calls into fitness not just Mr Hughes’ suitability but also of those colleagues who knew.  The cover-up clearly illustrates that the SFA and Mr Hughes knew that a revelation of the article would be problematic, given the “independence” required of his role.

Mr Hughes will of course claim he is independent.  He can point to his public pronouncement last year supporting the SFA decision not to engage with the SPFL on a further review of the handling of Rangers and the EBT tax case last year as proof of his independence, given that the issue was being pushed hard by Celtic.

However, in private Mr Hughes has been fiercely criticised by his Celtic chums and by Celtic FC for supporting the decision not to punish Rangers further.  That left him “in the dog house” at Parkhead.

Following the Craig Whyte trial.  Mr Hughes as the senior “independent” director was a powerful voice on the Board at the time it used the SFA Compliance Officer to look into the granting of a UEFA licence to Rangers in 2011.  After months of procrastination, the Compliance Officer has now been pushed into making a complaint against Rangers.  To have involved himself in meetings where such issues were discussed was at best unwise.

I believe that the SFA are having a meeting at Hampden this afternoon where Mr Hughes is on the agenda.   I believe that the actions of their other office-bearers and staff should also be considered if they wish to remain credible.