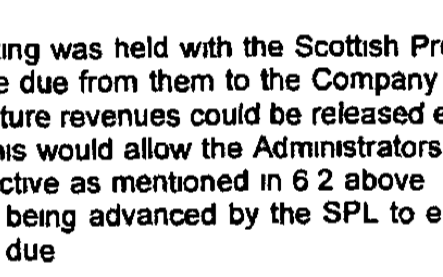 It will help if any readers wishing to can read the SPFL and Gretna accounts to go along with this short note.

The Gretna accounts are listed here – https://beta.companieshouse.gov.uk/company/SC249414/filing-history – click on the link which says “21 Aug 2008 Statement of affairs”.

Also of interest for Gretna is the 21 Aug 2008 Notice of move from Administration to Creditors Voluntary Liquidation.

Neil Doncaster, the SPFL Chief Executive is paid just short of £400,000 a year.  As befits such largesse he waxed lyrical in a Radio Scotland interview about the difference between a loan and an advance – when they can be made, when they were made, whether they attract VAT and how they should be handled in company accounts.

Given the explanations for the Gretna monies; the demonisation of Ann Budge for daring to disagree with them; and the dreadful intellectual and financial somersaults performed by both Doncaster and MacLellan over a number of matters one can only conclude that in a healthy organisation both would have resigned by now.

For instance, with Gretna, Doncaster said a loan was made and the members (SPFL clubs) suffered a loss.  Yet the accounts show Gretna were given an advance.

In his Q&A SPFL Chairman Murdoch MacLellan said the following:

“Previously, a loan had been made to Gretna (in administration), to enable it to complete its SPL fixtures at the end of a Season. The club was ultimately liquidated the loan was never fully repaid; and all of the other clubs lost fee payments as a result. This demonstrates the fundamental problems with loans to clubs.”

Doncaster followed up and the following is quoted from the Daily Record which itself quotes Radio Scotland from the weekend in relation to the difference between a loan and and advance “Well, there is a real difference and it’s important to make the distinction. They were advanced fee payments, they were subject to VAT, loans are not subject to VAT.

“Those advances were invoiced by the clubs, loans are not invoiceable. And loans, by their very definition, have to be repaid. These advance fee payments did not.

The documentation provided by the administrators shows – 21 Aug 2008 Statement of Administrator’s Proposal – https://beta.companieshouse.gov.uk/company/SC249414/filing-history – makes it clear the SPL were not creditors and in fact part 6.3 shows that detailed discussions had taken place between  the SPL and the administrators.

Gretna completed season 2007/08 whilst in administration therefore I fully expect any loan would have had to have been disclosed in the 07/08 accounts. I’ve included the year either side to be thorough.

If it was a loan why did the administrators describe it as an advance?

Why is there no loan outstanding on the SPL accounts from the time?

If a loan, why are the SPL not registered as a creditor?

The SPFL, as the SPL is now known, are implying that the administrators took on a loan they couldn’t pay back and described it as an advance.  Surely administrators would be breaching their duties if they did that?  They clearly didn’t otherwise the SPL would have been a creditor.