There For The Taking 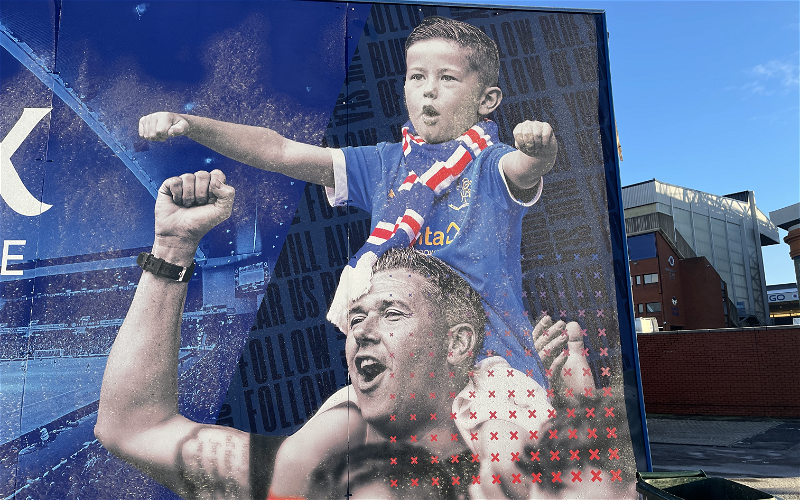 There For The Taking

Like every other Rangers fan, I cut a frustrated figure as I left the stadium today.  As with any game against that lot, the unpredictability of the fixture means you go through every possible emotion in the week leading up to it and during the game itself but, I don’t think many of us expected the game to play out as it did.  Having watched them a few times this season, I said to anyone that would listen, that I didn’t think they were as good as they or their media lapdogs would have you believe.  That being said, I was less than confident prior to kick-off and looking at the respective line-ups it is clear to see where the major difference lies; depth.  It’s quite simple, they have it, we don’t and unfortunately that would prove to be the deciding factor in them escaping with a point, although it has to be said, it was much more to do with the latter, rather than Celtic doing anything ground-breaking.  In fact, they were there for the taking and it most definitely feels like two points dropped today, despite me saying pre-game that I’d probably have accepted a draw.  Here, I look at some of the key moments on what was a bit of a disappointing day albeit with some notable improvements:

‘Get in their face, play with passion, be brave on the ball, cut out the silly slack passes, put the bomb-scares Starfelt and Hart under pressure,  press high up the pitch, DO NOT concede a stupid goal’

I’d be amazed if any Bluenose didn’t hear at least one of these soundbites prior to the game, no matter where they were watching, in fact I uttered a couple of them myself.  As it was, we contrived to do the complete opposite and were a goal down within five minutes.  A lot has been made of Alfredo Morelos’ ‘contribution’ to the first goal but, it was an accident waiting to happen given how we started the game.  Lundstram and Kamara looked like they were running through treacle in the opening minutes and even after Morelos’ poor pass, Tavernier actually gets onto the ball cleanly after an appalling touch from Maeda, only to give the ball straight back to him.  It was a shocking goal to lose and something we all seen coming after a very poor display of passing against Motherwell.  It took us a full half hour to get any sort of momentum in the game of which Celtic were in complete control and commanding 70% of the possession, despite starting the match with only ten men (seriously, wtf was James Forrest doing out there?).  Our midfield once again made theirs look like superstars, which prompted the lad next to me to comment that Glen Kamara looked ‘every inch a 50k player these days’.  Remember when we used to gloat about that?

An enigma, someone our fans love to hate and for many, the fall guy today.  His poor pass played a huge part in the opening goal but, it was his two glaring sitters that defined his performance for me.  He was in a very physical battle, which I thought he coped with no problem but, after managing to get a yard of space (twice) somehow managed to miss the target when it seemed easier to score.  Deserves credit for taking the game to Celtic and it was his pressing that forced Hart into a mistake which eventually led to Ryan Kent hitting the post (our first meaningful attack) but, overall he failed again to exert any real influence on this fixture and it’s difficult to see him return to the sort of levels that terrified defenders on the European stage only a couple of years ago.  This will infuriate a few and I know it’s been done to death but, he still doesn’t look mobile, sharp or slim enough to me either.  With all that considered I don’t believe the significant outlay of a new contract would be worth it in the long run.  The two cups still to play for, and lack of striking options, mean we will hang onto him until the end of the season but, it very much feels like his race has run as a Rangers player and will leave for nothing.  A sad way for it to end after £20m figures being talked about not so long ago.  No matter how misguided those were, it’s an absolute farce that we find ourselves in this position.

Whilst what I’m about to write could be levelled at several players in the team/squad the contribution of our fullbacks can’t be understated given the way Michael Beale wants us to play. This was another poor day at the office for a duo that were once our biggest assets in an attacking sense and again, it wasn’t all that long ago.  A lot has been made of Borna Barisic and his delayed return from a bit-part role at the World Cup and an excellent cross against Motherwell, seemed to vindicate his decision for many but, for me he just cannot be relied upon when the going gets tough.   As for our Captain he once again stood up to blast a penalty high into the net, under huge pressure but, is another who looks a yard off it.  He should’ve had an absolute field day up against a very poor looking Juranovic but, failed to really impose himself as an attacking force and when you make errors like that at the other end you will rightly be criticised.  I’m a huge admirer of Tav and I was so pleased for him when he lifted the league trophy after years of stick, not least from his own fans but,  his drop off in form is alarming and the fullback areas are something Michael Beale MUST address.

This can’t be sugar-coated.  Celtic have a better one and that’s on our recruitment team and Ross Wilson.  That lot were able to bring on five subs today, who all have a genuine claim for a starting berth in their team.  We, on the other hand brought on Scott Wright and James Sands to see out a slender lead when they were there for the taking.  For Michael Beale’s part he hasn’t shirked away from this issue.  He spoke post-game of ‘looking into the eyes of some players’ and repeated that he wanted to bring in fresh blood.  For me, the squad needs gutted, that much is clear.  The absolute minimum you expect from any Rangers player is fight, hunger and desire and whilst I thought there was a marked improvement today, I don’t believe there is enough of it throughout the squad.  It’s particularly galling when you see that mob across the City willing to run through a brick wall for their manager.  Post-match, the Manager rightly pointed to some very key players missing through injury namely Roofe, Colak, Lawrence, Hagi and Souttar but, he also hinted that some would be on their way out before emphatically stating that ‘they won’t play for a club this big again’.

That last part takes me nicely onto my final point of this rant.  Reading this back, it hasn’t gone unnoticed that it’s quite a negative piece.  It really wasn’t intended to be and like others on the message board today, I’m feeling quite optimistic about the future.  Michael Beale has made a very good first impression with me, he has talked a lot about standards and I think it’s fair to say there has been an improvement in that respect.  So too, is his refreshing take after games, which is a lot more balanced (and realistic) than that of Giovanni Van Bronckhorst.  That said he has made mistakes today; I don’t think anyone could deny that. My biggest gripe (which is shared by a lot of punters) was his use of substitutes and indeed that’s exactly what I asked him about post-match.  As I’ve repeated, I felt Celtic were there for the taking and I simply couldn’t fathom why we went so negative when there was (very good) attacking options on the bench.  Michael Beale, to his credit didn’t shy away from the question or double down as Gio might have and admitted that this wasn’t part of the plan.  He again pointed to some of these options lacking fitness and of course we DID have a lead to hang onto.  We had more than enough chances to win the match regardless and individual errors for both Celtic goals have ultimately cost us. For me, this doesn’t excuse Arfield being left on the bench but, at least we were afforded a more in-depth explanation than we might have been a couple of months ago.

We are now five games into his tenure and I don’t think my view on it has changed.  He will 100% get more out of some players, something we are already seeing but, we require a major rebuild to be able to put in a sustained league challenge. It would be a folly not to acknowledge Celtic’s strength in depth, comparative to ours but, I will repeat, they aren’t as good as they think they are and in a one-off game, we are more than capable of beating them.  I said today that there are shades of Alex McLeish’s reign about this appointment.  A young manager, taking on a huge role at our Club in December, who are all but out of the title race already.  The optimist in me believes the Cup competitions are well within Michael Beale’s reach this season, just as they were for Big Eck and who knows, with the proper support off the field, I firmly believe he can have us properly fighting for all three next season.