THROUGH THE MIDDLE – A MIDFIELD MASTERCLASS 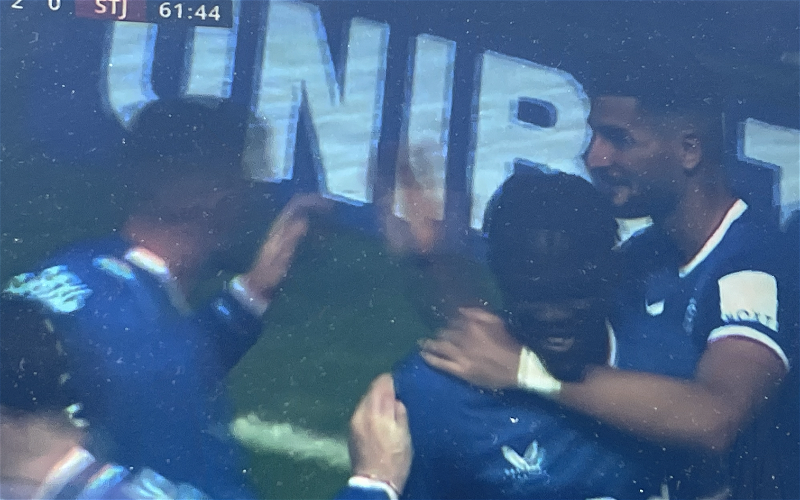 It was officially ‘taps aff’ weather in Glasgow when Callum Davidson brought his St Johnstone side to Ibrox for the third league fixture of season 2022/23. There was hardly a cloud in the bluest of blue skies, and the green, green grass of home and the lower tier of the Sandy Jardine stand were bathed in sunshine. Indeed, with the mercury rising above 30oC at pitch level, it was agreed that there would be breaks in play at the midway point of each half to allow the players to take on fluids.

Fresh from another seismic European victory on Tuesday evening, Gio van Bronckhorst made four changes to his starting XI. With the visit of PSV Eindhoven in the Champions League play-off only three days away, Ryan Kent was rested, while Tom Lawrence was listed among the substitutes. Their places were taken by Rabbi Matondo and Scott Wright. The other alterations saw Ryan Jack and Ben Davies coming in for Scott Arfield and James Sands.

August 13th is associated with a number of key moments in Rangers’ history. Jim Baxter made his Rangers debut on that date 62 years ago, while Davie Cooper did likewise 45 years ago. Rangers also chalked up the first league win of the Graeme Souness era on 13 August 1986, and the date is the thirty-fourth anniversary of the first match of the nine-in-a-row run.

And the current crop of players ensured there would be another memorable moment for future generations to look back on too, registering an emphatic 4-0 victory. Malik Tillman opened the scoring with another towering header, his goal created by the other full back on this occasion, with James Tavernier chalking up assist number 108. Antonio Colak then further enhanced his reputation as a penalty box predator when he swivelled his hips, turned, and shot the ball into the net for his third goal in three games before late goals from subs Scott Arfield and Tom Lawrence sealed the deal.

There were numerous positives to take from the match for van Bronckhorst, but for me, top of the list was the midfield masterclass served up not just by the five that started the match, but by those who came off the bench too.

The manager has a plethora of options in this key area of the field. He has players who are flexible and adaptable such that the five can start the game in a 4-2-3-1 then morph seamlessly into a 4-1-4-1 and other shapes and formations. One of those players must now be one of the first names on the teamsheet, John Lundstram.

He was once again the midfield fulcrum and he tended to play a part in any periods of possession Rangers had throughout the match. He was guilty of a careless pass early in the match, but that aside, he was as commanding as always. His spatial awareness in and out of possession is excellent. He always seems to find pockets of space in a congested area, and even when opponents are breathing down his neck, he’s rarely ruffled. Seemingly out of favour under Steven Gerrard, he now fits into the indispensable category.

Against St Johnstone, Lundstram had 73 touches of the ball in the 77 minutes he played. He had a passing accuracy of 90% and made three key passes. He also found his intended target with nine out of 12 of his long passes. His heat map below illustrates the areas of the pitch he covered. It’s fair to say that there weren’t many that he didn’t venture into at one point or another. 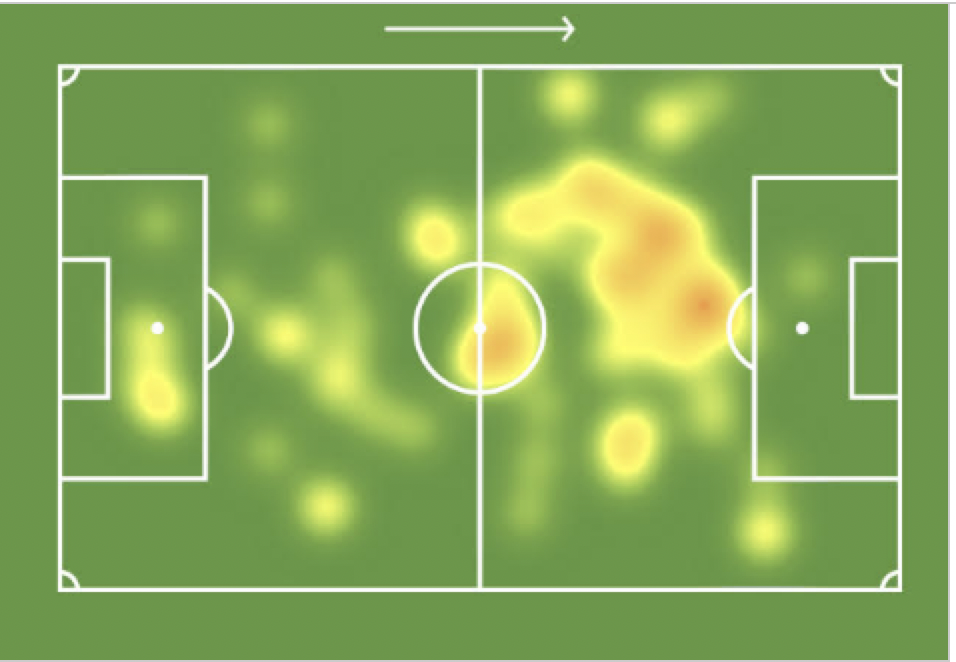 Lundstram was also a threat shooting from distance, stinging the palms of the St Johnstone goalkeeper, Remi Matthews, after half an hour then failing to hit the target after 39 minutes after some fine interplay in and around the box.

Alongside Lundstram was Ryan Jack. Many were speculating as to what Jack’s role would be this season given how prone he has been to injury, but his performance against St Johnstone showed that he is a key part of the first team squad. He started as part of the ‘2’ alongside Lundstram then moved to playing a central role in the ‘4’ when the substitutions were made. His heat map shows he played in advanced areas more often than we might have expected and on one occasion in first half stoppage time, he almost scored. He latched onto a ball over the top from Goldson, and his shot was parried away by Matthews. 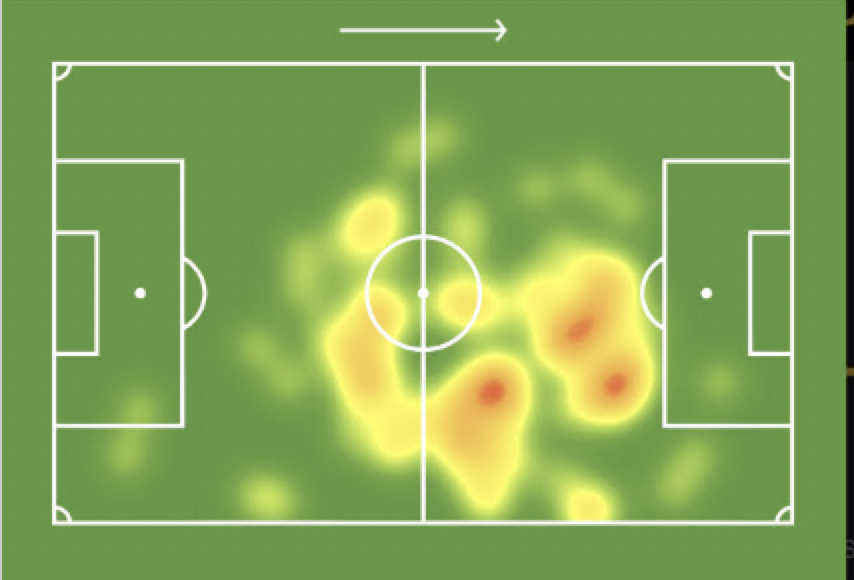 Jack had 77 touches of the ball and a passing accuracy of 84.8%. He made three key passes and lost possession 13 times (compared to eight times by Lundstram).

If Lundstram is the first pick, then Jack made a compelling argument in this match to be selected alongside him. Having said that so did Steven Davis last weekend against Kilmarnock, the veteran posting an impressive passing accuracy of 92.5% and only surrendering possession seven times.

All of the new signings have made a positive impact thus far, but in the last two fixtures, Malik Tillman has grown in stature. He was superb again in the number 10 role, the 20-year-old adding to his vital opening goal with a series of key contributions. He made 24 accurate passes (a success rate of 88.9%) and successfully completed four dribbles from the four he attempted. He has made his presence felt, and already Rangers fans are hoping the club exercise the exclusive option to buy clause in the former Bayern Munich youngster’s loan deal.

Tillman was flanked by Scott Wright and Rabbi Matondo initially. Wright is a much-maligned player, but he enjoyed a fine end to last season, playing in the Europa League Final and scoring the second goal in the Scottish Cup Final. His heat map showed that he doesn’t stray too far from his right wing berth, and his numbers show he may give the ball away a little too often (passing accuracy 67.7%), but he had one driving run in the first half that was kickstarted by a cheeky nutmeg. Wright wasn’t able to find a finish to cap it off – his shot was blocked – but he will have a role to play on all fronts over the course of the season.

Matondo had a superb match. Like Wright he hugged his area of the pitch and didn’t venture far from it. But he made four key passes, created two ‘big’ chances, and had a passing accuracy of 80%. He has pace to burn and will cause defences significant problems. Given he is more likely to play on the right when Kent is fit, the fact he did so well on the other side of the pitch against St Johnstone means he is tailor-made for GVB’s strategy. Flexible and versatile is what the manager has stated he is looking for in all his midfield players.

Taking account of the strength-sapping heat and with the game to all intents and purposes over when Colak scored the second goal after 62 minutes, van Bronckhorst made some changes in the middle of the field, introducing Glen Kamara, Tom Lawrence and Scott Arfield. The latter two were involved in the two goals scored when they were on the field, Arfield scoring the third then laying on the fourth for Lawrence.

Lawrence was superb against Union SG and last weekend against Kilmarnock. He offers another option at set pieces, and Rangers are now no longer overly reliant on Tavernier and Barisic to take corners and free-kicks. And the Welshman also offers that versatility that is a fundamental requirement of the GVB strategy, as he has played right, left and centre since he joined the club from Derby County. Although he was only on the field for 23 minutes against St Johnstone, he scored, had a shot blocked and made 22 accurate passes, which equates to a success rate of 95.7%.

Arfield offers experience as well as adaptability. Since joining Rangers, he has made 194 appearances, scored 36 goals and claimed 19 assists. He makes clever runs and takes up good positions in advanced areas, and while he won’t figure every week, having the option to throw him in from the bench may well reap a rich reward for van Bronckhorst.

When asked about his midfield options post-match, the manager was pretty clear about the importance he places on this area of the team.

‘It’s very important [to have depth and flexibility],’ said van Bronckhorst. ‘We have so many good midfield players and I am happy to use them as well. Kamara came in late in the game, and we still left Steven Davis on the bench. I think in midfield and up front we have so many possibilities depending what we need in games. You want to have a squad like we have now to compete in all the competitions we are in. The midfield is a very important part of the play as if you control midfield, you control the game, so I was very pleased with the midfield today.’

The initial signs are very promising as the quest for 56 league titles continues.