Ton up for Tavernier 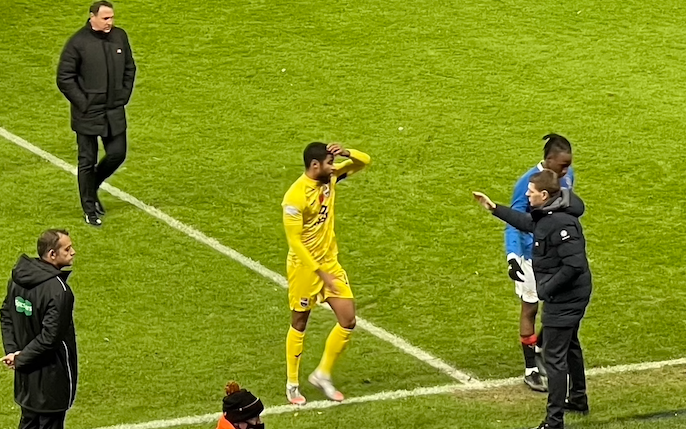 Steven Gerrard paid tribute to on and off field matters in a poignant afternoon at Ibrox, as Captain James Tavernier chalked up his one-hundredth assist in Rangers colours, as the light blues ran out comfortable 4-2 winners over Ross County.  The official record books won’t count Tavernier’s other ‘assist’ in the second half but, they really should, after his low driven cross saw the hapless Lacovitti turn the ball into his own net and kill the game as a contest for Rangers’ fourth goal.

The day began on a solemn note, as the capacity crowd paid their respects to our Countries War heroes with an immaculately observed minutes silence and card display, something both Gerrard and Tavernier spoke of with real pride in their pre-match programme notes and it was the latter’s pin point accuracy cross, headed home by Joe Aribo that dragged Rangers level after they had given the opposing team the now almost customary goal of a start, after a blunder in midfield.

‘James is a player who has stepped up big for me, since I’ve come here and for a full-back he has some incredible numbers.  Last year’s success has made him even more determined and hungry to build on that so, he has to keep going’.

Gerrard too spoke warmly of midfielder Juninho Bacuna’s performance, a first-time starter and one of five changes following Thursday’s Europa League match with Brondby along with Fashion Sakala who, put in another tireless display leading the line after his stunning hat-trick against Motherwell seven days ago.  The Rangers support have seen flashes of the talent that tempted Steven Gerrard to bring them to the Club and they were star performers in a match that Rangers dominated from start to finish.

I think for the two players, it’s on them now.  They’ve had time to settle in and get up to speed physically and with the footballing philosophy so it’s really time for them to push on and evolve.  Fashion works so hard for the team, he never got goals today but I’m just as pleased with his performance as I was last week.  With Bacuna he has all the talent and the tools in his locker.  You see his range of passing and gives us another option arriving from midfield as he isn’t afraid to have a strike at goal, which you seen today with a fantastic finish’

A brilliant goal indeed, which capped off an accomplished display from Bacuna.  He is a player that will, on occasion, frustrate the support as he most definitely isn’t afraid to take a few risks but, when they pay off like today, he will have those same punters in raptures, as they were after his stunning strike for Rangers third.  Perhaps the biggest cheer of the day was reserved for the returning Ryan’s however.  Kent and Jack returned to Ibrox today after spells out injured (Jack for a full SEVEN months) and after his immediate impact as substitute on Thursday night Kent was thrown in from the start.  If he was suffering any rustiness, he certainly didn’t show it, in fact it was like he had never been away.  He understandably tired early in the second half but, for 45 minutes he absolutely terrorised the Ross County defence, capping it off with a stunning strike from distance that dipped and whistled past Maynard-Brewer in the County goal.  You could feel the energy from the stands whenever Kent got the ball and for many inside Ibrox he was worthy of being awarded MotM, despite being replaced early in the second half.   It was the return of his namesake that really stirred the emotions within Ibrox though as Ryan Jack was given a standing ovation from the light blues legions when he made an appearance as a second half substitute.

‘It’s fantastic to have Ryan and Jacko back.  You just have to feel the energy and applause in the Stadium when he came on.  That to me, says everything about Ryan Jack.  He plays for the supporters and leaves everything out on the pitch.  He sets standards and pushes people around him.  The sooner we can get him back up to speed this team will become better.’

So, a pleasing day all round at Ibrox.  Rangers go into the International break in a strong position, having stretched their lead at the top of the table back to four points and with players returning from injury and new signings now showing their worth, there is a lot for Gerrard to be happy about.

‘We’ve been building towards looking like this in terms of our chance creation and our variety in the final third of the pitch and spreading goals around the team.  Going forward, in terms of creation and looking dangerous, we are in a good place and with TEN goals in two domestic matches I think the players deserve, a lot of credit.’

Even at that though, Gerrard wasn’t fully satisfied and was quick to ensure his troops don’t get carried away after two rampant displays in the League this week and he even had a cheeky dig for his Captain.

‘We simply can’t keep giving away sloppy goals, as it will eventually bite us.  The goals we lost today are the one negative in a strong performance and I’ve said to the boys it’s something we need to improve on.  I’m sure Tav will remind me in the coming days about his 100th assist for the Club but, I’ll remind him that he owes me a clean sheet!’

Tongue in cheek of course but a timely reminder to everyone that there is still work to be done.  Two enormous matches now face The Champions following the International matches and, with a semi-final and make or break Europa League tie within a few days of each other, it certainly feels like Rangers’ season has kicked into life at just the right time!