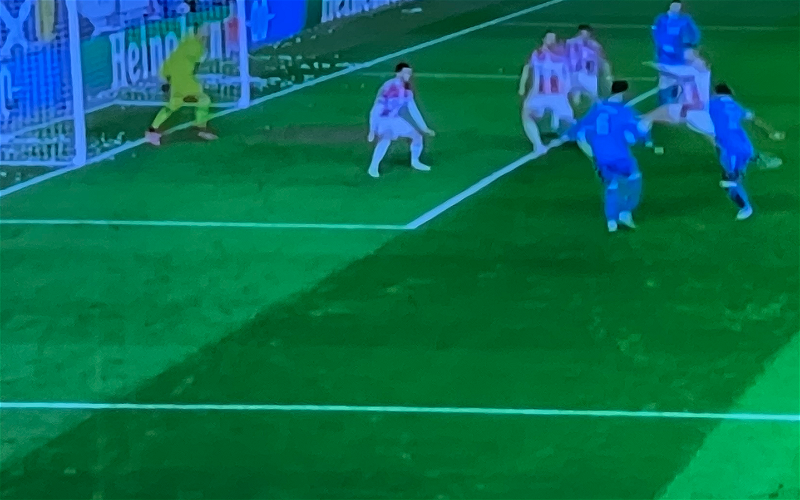 It’s difficult to know where to start after a night like tonight.  After the unbelievable highs of Borussia Dortmund in the last round, and the emphatic way that Rangers dealt with them, the Club found themselves in unfamiliar territory this evening.  No, not being in the last 16 of the Europa League, that is now becoming somewhat of a habit but, being FAVOURITES to progress to the last eight?  That’s a little different. For anyone who didn’t see the match, they could be forgiven for thinking that Rangers had simply picked up where they left off, from a couple of weeks ago.  A 3-0 victory, over Serbian Giants, Red Star Belgrade SOUNDS comprehensive enough, routine even.  The reality of the evening was quite different though.  This was far from easy and it required every single Rangers player emptying the tank to get the job done.

Whenever a team, takes a substantial lead into the second leg of a Cup tie, you expect the manager of the team leading, to give the usual mundane but, respectful soundbites:

‘It’s only half time, this one isn’t over’

‘We know the threat they have, they’ll come at us in the second leg’

This time though?  You KNEW that Giovanni Van Bronckhorst really meant it!

I’m really happy with the result, we played really well.  If you see the game, you think there could’ve been more goals in it, especially for them. Going to next week to Belgrade is going to be hard, maybe even harder than today and although we have a three-goal lead to take with us, this tie isn’t over yet.

This was a pulsating, high quality 90 minutes that flowed from end-to-end, leaving the (outstanding) capacity crowd, along with both benches absolutely breathless.  VAR calls; numerous tactical changes; full blooded challenges; an unbelievable penalty save from Allan McGregor; Tav and Morelos doing their thing; Glenn Kamara as a ‘ten’; brilliant football on show from both sides and Rangers scoring from set pieces (yes, that’s plural).  This game really did have it all and whilst Red Star can certainly count themselves unlucky to be behind by three, Rangers deserve huge credit for, once again, on a big European night, displaying that cutting edge and a nastiness in front of goal, something they have lacked domestically of late.

For anyone lucky enough to be in attendance, this is exactly the type of game you want to be part of.  Ibrox was absolutely jumping and amid the raucous celebrations from the stands at the end after a well deserved victory, no one was under any illusions about the task at hand next week, even with a three goal lead, not least the manager.

It really was one of those crazy nights and even the staunchest of Bluenoses will admit, Red Star weren’t just there to make up the numbers.  ‘I really wish we had got a fourth’, was repeated several times as the punters left the stadium, which only illustrates the obvious threat that Red Star pose.  They have undoubted quality, probably a good bit more than they were given credit for, when the draw was made and whilst the THREE ‘goals’ they had ruled out for offside were 100% correct (along with Rangers’ penalty call), the marginal nature of them means that The Scottish Champions can’t afford any complacency.  The tie ISN’T over of course but, Rangers CAN dare to dream and at the very least, feel pretty pleased with themselves in how they went about their business.  Jack, Lundstram, Morelos and Tavernier were all immense for the home side and with all this talk of the Serbians being a little unlucky it would be remiss not to mention the numerous chances Rangers created themselves.  As we stated in this column only a few days ago, The Gers look a different animal in Europe and whilst everyone expects the Serbians to come flying out the traps there is always this feeling, this belief, this confidence even, that Rangers will grab a goal or two.

Asked if the performances against Dortmund and now Red Star could see Rangers do the unthinkable and go all the way, Gio was as diplomatic and respectful as you would expect.

It’s one game at a time.  I keep hearing being asked about Dortmund but, it’s history. Tonight, it’s a new team, a new club. Of course, it gives us confidence, when you look at the other ties, there aren’t many goals so to score three, at home against a quality team like Red Star is a great performance but, as I keep saying we are only half way.  If we are there next week, we have a great chance to go through but, everything starts all over again.

Cautious words from the Rangers boss throughout his post-match assessment but, Rangers will go to Belgrade brimming with confidence and the ‘second-half’ promises to be an absolute cracker, I can’t wait!