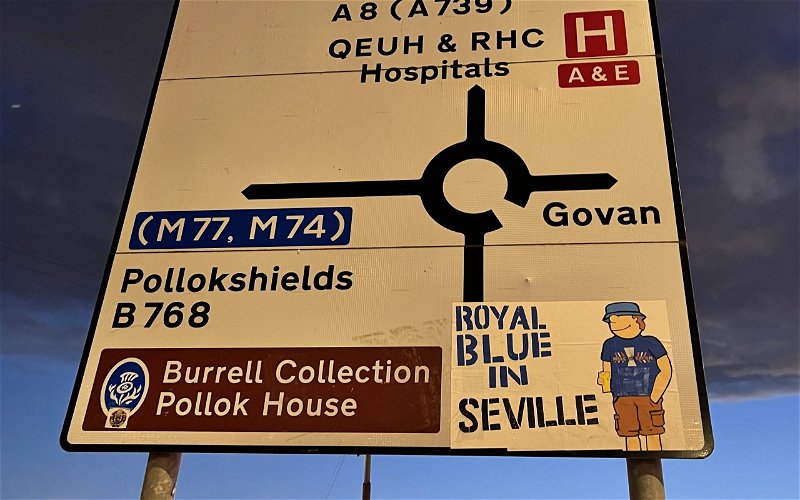 Giovanni Van Bronckhorst admitted that he won’t know until the very last minute, if Kemar Roofe will be available to play in the Europa League Final next week.  Roofe has found himself on the treatment table in recent weeks, leaving Rangers short of options in that area of the pitch and Van Bronckhorst stated that he can’t say for sure if the Jamaican International will make it.

It’s going to be a close call for Kemar Roofe and we are assessing day by day.  If we compare him to Ryan Jack, I think he (Jack is ahead of him) and should be ready for next week but, for Kemar I just don’t know.

Gio was talking after Rangers romped to victory tonight, in their final home game of the season, thrashing Ross County 4-1 with Joe Aribo, once again starting in that unfamiliar centre forward role but, if the Manager was worried about his striking options (the way some fans are) for Rangers ‘date with destiny’ next week, he certainly wasn’t showing it. On the other hand, why should he be?  Yes, it would be a blow if Roofe doesn’t make it but, for Van Bronckhorst’s team they have proven, particularly over the past month or so, that being without a ‘recognised’ striker, does not equate to a ‘lack of goal threat’.  Rangers had no fewer than 33 attempts on goal as they flew out the traps at a bewildered Ross County side, who have proven to be a little thorny this season.

This was supposed to be a dead rubber wasn’t it?  The fans were certainly a bit quieter and there was definitely an end of season feeling to it but, unfortunately for Ross County, someone forgot to tell the Rangers players. Almost from the first whistle they besieged the visitors goal, playing the game almost exclusively in the final third of the pitch. In fact, it wasn’t until almost the fifth minute before any of the opposition players touched the ball and even at that, it was a deflection that went away for a corner.   A lot had been made pre-game about the Rangers starting XI, more specifically about the regulars the Manager WASN’T resting however Van Bronckhorst dismissed the suggestion that the players should’ve been ‘wrapped in cotton wool’ ahead of next week and it’s hard to argue against his logic.

It was a good performance we wanted to keep winning and keep the momentum.  It was important to start with a strong formation but, also be able to rotate.  It was a comfortable win in the end.  It’s about finding the right balance, you do want to rest players but, you also want to keep the rhythm.  I think you could see tonight, first half especially that we were at full speed and it really should have been more (goals).  Of course, we were then able to rotate but, I think this week it has been important to give as many players as possible some minutes to get them ready for what lies ahead.

After a well-deserved rest at the weekend, where Rangers cruised to victory over Dundee Utd, Gio made seven changes which saw a much more familiar starting line-up and one that looked as refreshed and raring to go as you would expect on a balmy early season game in August.  With the manager confirming there will be changes for this weekend’s final league game at Tynecastle, attention has already turned to next weeks all important team selection and the few spots up for grabs.  I make it as many as eight, or possibly even nine of tonight’s team who are certain or, at the very least ‘very likely’ to start in Seville so, who then steps in?  Of course, there is the afore-mentioned Jack and Roofe, who will be given every chance to make it but, what of some others, who are knocking on the Managers door, particularly those who have found a bit of form, and their shooting boots at just the right time?

I am happy with Scott Wright and Fashion, they are finding form just in time for this final week.  It’s good to have options for players that can score goals and they will be ready.  Scott has done really well, he didn’t get a lot of game time when I first came in and he is also playing in apposition where we don’t always go with a winger but, sometimes a midfield player.  I feel like he has developed and although he is very fast and very mobile I feel he is also comfortable playing further inside.  I’m happy for him because he is a player that has had to keep going in training and wait for that chance to be ready to come into the team and he is one of those players who is ready now.

It’s clear, throughout his post-match interview that Gio is relaxed about Rangers’ form, health and the options he has going into the next ten days.  Whilst the rest of us climb the walls with anxiety about possible missing players and formations, Gio emanates calmness and displays an assuredness of someone who not only understands that football has a way of throwing these anomalies at you but, that he also believes in this group of players and their ability to get this one over the line.  Of course, this is as close to a 50/50 tie as you will see, only an idiot would suggest otherwise but, for our manager it’s abundantly clear that he trusts these players and whatever he decides, he has most definitely earned ours.