World Shut Your Mouth – the original Rangers fanzine, with download. 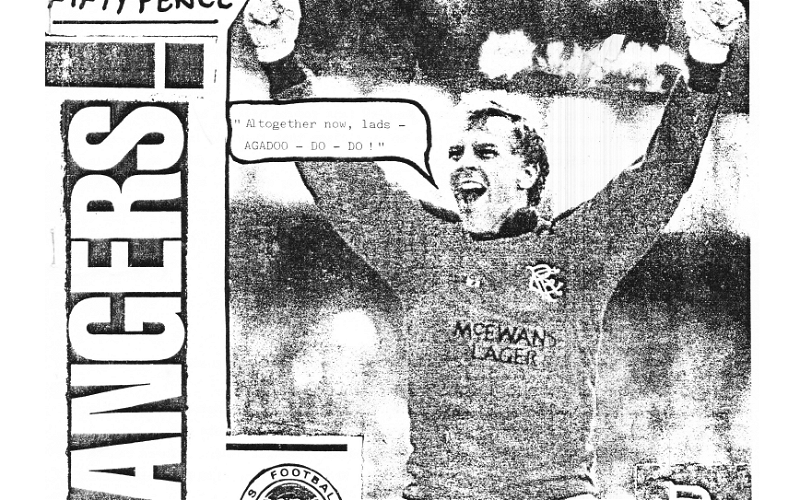 I never saw WSYM on sale.  I only heard about it after I’d started Follow Follow fanzine in the summer of 1988.  Apparently it went on sale outside the ground for a couple of games at the end of the previous season.  I eventually got a photocopy of it and then a few years later someone was kind enough to send an original copy through the post.

I did try to track the folks behind it down – intending to nick their writers if they weren’t going to continue publishing!   Niall Kennedy, the Thistle fan who ran the Strathclyde Programme Shop, told me the editor had left some copies in the shop but never called in for the proceeds.  Someone told him the editor had developed ME and might do another issue if he got better.  That was it – no names, no contact.  It was like a ship in the night.

Recently, I was going through some old folders and found my copy again – I’ve scanned it and had it made into a PDF which readers can download.

It’s very much of it’s time and looks much like loads of the punk music fanzines which exploded across the UK in the late 70s and early 80s did – lots of cartoons with hand-written bubble dialogue.  Pictures nicked out of newspapers and pasted in without screening or re-touching.  Bad language here and there – we all though that was radical back then!  It looks like someone had found an office photocopier to run off the mag and then hand-stapled it.

The only time I recall seeing any mention of it was in a book by the dreadful arse Bill Murray where he went into cod psychology saying the title reflected Rangers paranoia and obsession with superiority and aggression. Wrong again Bill.  In fact it’s the title of Julian Cope’s first solo album (and later a single from his third album) after he left.  Of course, a Rangers fanzine having a connection with a renaissance-man artist like Cope doesn’t really fit the caricature.

What’s in it?   Re-reading it now I smile at the slap-dash attitude to layout, the double-spacing of the type, the anger in some parts, the giggles in others, rants against the mainstream media, a piss-take of Bob Crampsey’s In The Know newspaper column, a joke about Desmond’s White coffin –  but hey, I won’t spoil the fun, have a read for yourself on the download.

And if there’s anyone out there who was involved in the fanzine or knows more of its story please get in touch.  It’s a chapter in the Rangers Story we should know more about.