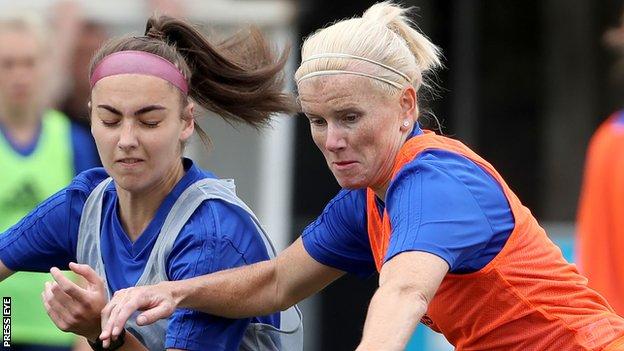 This is Northern Ireland's first camp since their Euro play-off win over Ukraine
Northern Ireland manager Kenny Shiels believes that talk of his side reaching the World Cup finals is "foolhardy".

NI host Scotland in a friendly on Thursday in their final match before their opening World Cup qualifier at home to Luxembourg in September.
Shiels' team reached the Euros in historic fashion in April but he thinks the World Cup qualifying structure works against "smaller nations".

"The World Cup is so much more difficult than the Euros," he said.

"I know the World Cup is our next juncture but I think it would be foolhardy for us to talk about qualifying for the finals.

"With the draw, it is being provided more and more for the top nations to qualify because they want all the top teams in the world to be at the World Cup.

While Northern Ireland are playing a match for the first time since they beat Ukraine in their Euro play-off in April, Scotland go into Thursday's match at Seaview looking to bounce back from missing out despite having been top seeds in their qualifying group.

High-profile Northern Ireland players such as Rachel Furness, Ashley Hutton and Demi Vance are out injured, while Everton forward Simone Magill is unavailable as she is set to get married at the weekend.

With so many players missing, Shiels has taken the opportunity to call up a number of young players for a match which he said is more about preparation for World Cup qualifying than the result.

Shiels recently signed a contract extension with the Irish FA
"We don't have to beat Scotland but we have to be careful we don't lose the winning mentality," he continued.

"Luxembourg is a much bigger game than Scotland, as is Latvia [NI's second qualifier], and that is what this game is preparing us for.

"But we have got total respect for Scotland who have a massive pool of players playing in the big leagues in Europe and England. Twenty-one of their squad are full-time professional players, so that is the magnitude of the game and we will do our best. "

With the Euro finals in England next summer coming in the middle of World Cup qualifying, Shiels is thinking carefully about how he plans the squad's development.

"It is a little bit 'juggly'. The Scotland game is to help the players top up on their game fitness. Hopefully we will learn something from Scotland and it will help the girls to get on a positive pathway."

The Irish Football Association’s digital matchday programme for this evening’s FIFA Women’s A friendly international between Northern Ireland and Scotland is...

Scotland have some decent players Arnot clearly is good but Caroline weir caught the eye in 2H plus Fiona Brown threatened with a couple of good drives from distance . 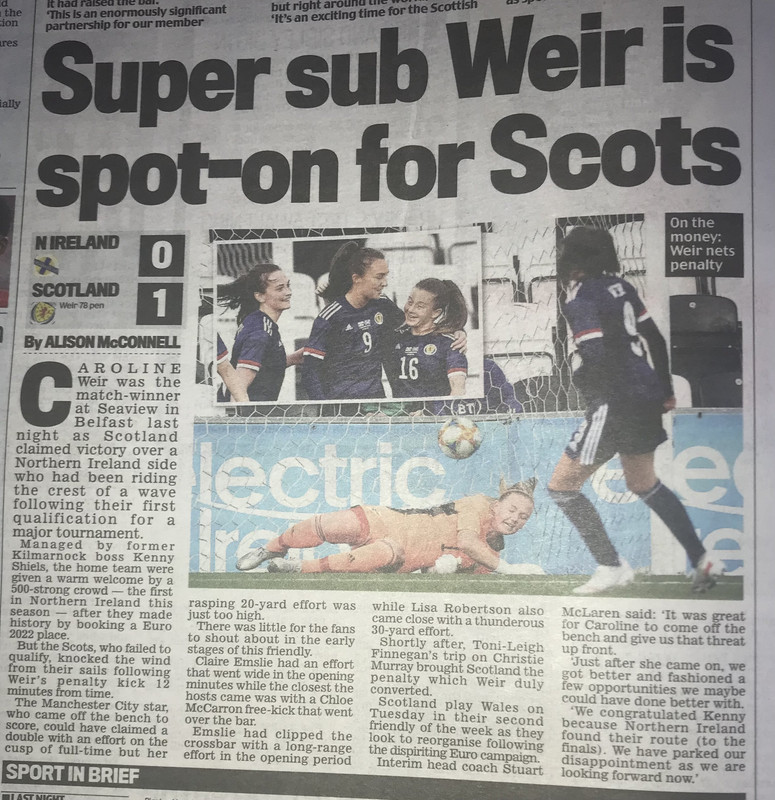