The Rangers striker formed a special relationship with Bradley during his time at Sunderland and in doing so the pair helped to raise awareness of neuroblastoma, a rare childhood cancer.

Posting on Twitter, on what would have been Bradley’s eight birthday, Defoe tweeted: “Me and @gemlowery know you’re having the best party up there today mate.

“We miss you every day.”

The post was accompanied with a picture of Defoe and Lowery at a previous birthday party.

The Gers striker’s post has racked up nearly 600 retweets and nearly 11,000 favourites.

The Sunderland-mad youngster struck up a remarkable friendship with Defoe after being invited to be a mascot for the Black Cats.

Bradley then walked out at the home of English football, Wembley, with his hero when the striker was recalled by England.

They remained close until the six-year-old schoolboy passed away in July 2017 from the rare form of cancer.

Their relationship touched the hearts of football fans across the world and former England star Jermain, 36, later dedicated his OBE for charity work to the youngster.

Speaking about her son’s birthday, Bradley’s mum Gemma said: “On special occasions, like Bradley’s birthday, my grief is overwhelming; it feels like the day I lost him all over again.

“What I’ve learned now, is that it’s OK to cry, scream or shout; it’s OK to have bad days, as long as I don’t get stuck there.

“I know it will be one of those bad days, when my baby would have been turning eight, but I’m surrounding myself with my friends and family who always get me through it.

“I try to remember the good times, but also to think about all the fantastic things we’re doing in Bradley’s memory, to help poorly children and their families across the UK.”

We previously told you how Defoe revealed a text from Gemma Lowery after he signed for the Light Blues.

Jesus that's hard to read. What a great guy Jermain Defoe is. He's a credit to our club.
C

A class act on and off the field.

Official Ticketer
In tears reading that.

What a completely wonderful empathetic human being JD is. Is there link for the tweet? We should spread it far and wide.

So proud he plays for us?

He just seems like an absolutely great human being, and I am delighted he plays for Rangers.

The guy is a class act with a heart of gold. He spent a lot of time with that poor soul and in the process of trying to make the remainder of his short life as enjoyable as possible, formed a genuine bond with him.

The type of guy you’re proud to see represent us.

Can't even begin to imagine what it must be like to go through something like that. I've only ever lost older folk going through illnesses where your expecting it. 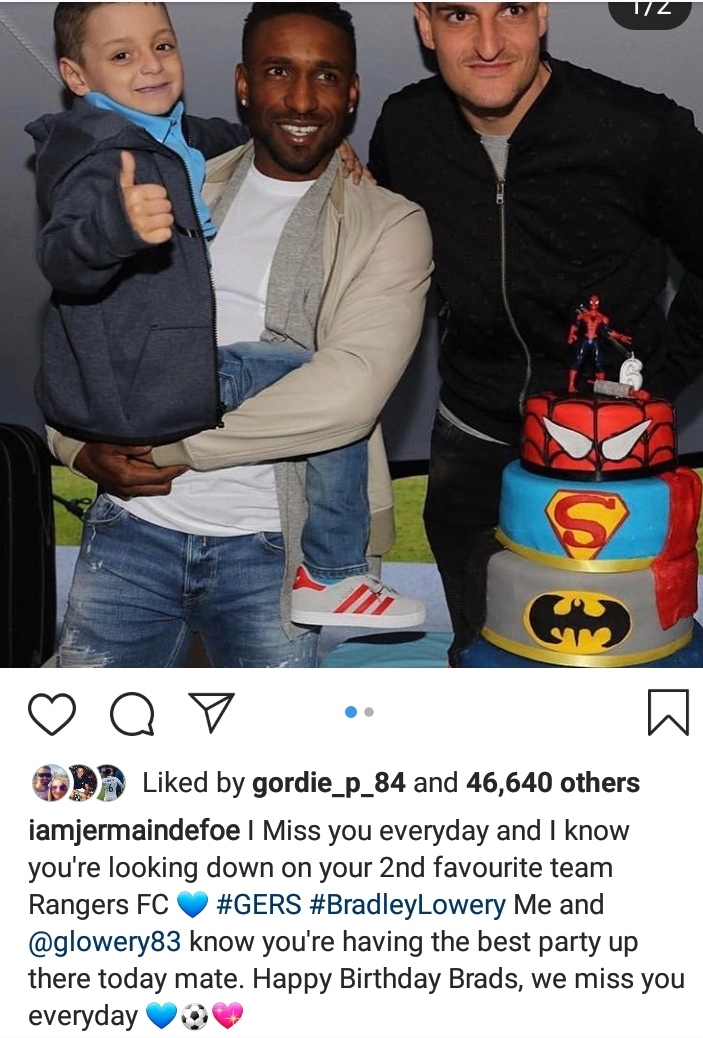 Official Ticketer
Defoe/Bradley really tugged at my heart strings and I often think of that friendship regardless of timelines (regardless of Jermaine joining us). The pair of them can only be described as tremendous human beings. Bradley is still alive in many ways.

Defoe is just one of life's good guys. A credit to our club.

You get the feeling Jermain would still be a genuine compassionate guy even if he wasn’t a famous football player.
Just a decent human being.

The whole story is heartbreaking

The young boy really looks like his dad as well

he was a credit throughout - I know this story well , Defoe really is a class act football wise but also more importantly as a human being.

Had great admiration for Defoe with his relationship with little Bradley and his support to the family before he joined Rangers. A genuine, likeable, down to earth guy who I’m proud to say plays for our club.

The wee man’s time was made a little better by JD. Heartbreaking stuff.
W

Given his career, Defoe could have easily come up here and moaned to the press about not getting as much game time as he wanted, about the standard of our league etc etc.
But instead he's been a model pro, knuckled-down and cemented his place in the starting 11.
This thread just reinforces what a decent human being he is.
I'm actually considering going up to Cash Converters and getting a pair of faux diamond ear rings ;-)

Got very upset reading that so sad
M

Defoe is a class act.

As good a player he is, his relationship with Bradley is largely the reason he's my favourite footballer. He lived just a couple of minutes from me and it was heartwarming watching their bond develop. He's just class

Jermain Defoe is an absolute model professional and I'm proud to have him at our club.


One is an absolute gentleman and superstar, the other is a down and out scumbag.

Jermaine is just a class act!