Anyone making a South African connection with Rangers would quickly find a reference point in the famous 1950s duo of winger Johnny Hubbard and striker Don Kitchenbrand. Along with Dean Furman, who managed a single substitute outing in 2008, they are the only South African players to have represented the Ibrox club in competitive first team action.
That list will have a new name soon after Rangers completed the loan signing of current South African international midfielder Bongani Zungu from Amiens just two hours before the transfer window closed.

Zungu is the first black player from his country to sign for Rangers - but not the first to wear their light blue jersey.
That distinction belongs to Thomas Madigage, a beloved and ultimately tragic figure in South African football whose time with Rangers is less readily recalled.

It was in the summer of 1989, when Rangers’ stunning capture of former Celtic striker Mo Johnston was making headlines around the world, that Madigage arrived in Glasgow to little fanfare. The then 18-year-old midfielder had come on trial in May after Jimmy Nicholl, then the Rangers reserve team coach, had been alerted to his potential by Jomo Sono, owner of the eponymously named Jomo Cosmos club in Johannesburg.
Sono, a former team-mate of Nicholl’s at Toronto Blizzard, had given Madigage his debut for Cosmos when he was just 16, making him the youngest ever player in South African top flight football at the time.
Madigage joined the Rangers squad for a youth tournament in Italy and made an immediate impact as he received individual recognition from the organisers who voted him the best attacking player on show.

He was invited to return to Rangers for pre-season ahead of the 1989-90 campaign and was joined by another Jomo Cosmos player, Augustine Makalakalene - a more experienced midfielder who was then 25 - for an extended trial period.
While they both initially joined the reserve squad, Madigage immediately caught the eye of Rangers manager Graeme Souness and his assistant Walter Smith and was occasionally invited to train with the first team squad.
Affectionately, if predictably, he was nicknamed Pele by the other Rangers players who admired the teenager’s outstanding technique and dynamic ability to run at pace with the ball under complete control.

Madigage dazzled on a Highland tour with the Rangers reserves, earning rave reviews for his performance in a 4-1 win at Elgin City, and was then included for a friendly against Clydebank’s first team at Kilbowie on 5 August.
He featured in a strong starting line-up which included Scott Nisbet, Derek Ferguson, Sandy Robertson, Ian McCall, Gary McSwegan and winger Davie Cooper who was just days away from leaving Rangers to join Motherwell.
Madigage scored in a 4-2 win for the Ibrox men in front of over 2000 spectators, the Rangers fans in attendance giving a warm ovation to the diminutive and clearly gifted youngster.
Three days later, Madigage was included in the squad for Rangers’ final pre-season friendly against Clyde at Firhill and appeared as a second half substitute for Ray Wilkins in a 5-2 win watched by 3500 fans.

Speculation grew that Rangers would offer him a three-year contract but gaining a work permit was difficult at a time when Scottish Football League rules permitted only 10 foreign players from outside the European Union to ply their trade in the Premier Division.
Madigage’s prospective deal with Rangers duly fizzled out. He played two more games for the reserves, scoring in a 4-0 win over St Mirren at Love Street in which future Scotland striker John Spencer scored a hat-trick, before he and Makalakalane both moved on.
Their European adventure took the South African duo to Switzerland where both players were signed by FC Zurich.
But while Makalakalane went on to enjoy seven successful years in Swiss football, Madigage managed just one league appearance for Zurich before knee injuries saw his contract terminated as he returned home to rejoin Jomo Cosmos.

In 1993, he joined SuperSport United and became a hugely popular player in a 10-year spell with the Pretoria club. While never truly fulfilling his exciting potential, Madigage was renowned as one of the most entertaining players in the South African domestic game and was eventually capped four times for his country.
When he brought his playing career to an end in 2003, he became assistant-manager of SuperSport United, helping them win three South African league titles. He became famed for his happy-go-lucky demeanour on the touchline, always wearing the policeman-style hat of the Zion Christian Church of which he was a devout member.
In July 2012, he was appointed assistant-manager of the national team who were preparing to take part in the 2013 Africa Cup of Nations Finals on home soil.

But just three months later, tragedy struck. Madigage was driving on a notorious stretch of road to visit his ill mother in his home town of Burgersfort in the Limpopo region of the country when his car struck a stray donkey.
Madigage, just 41, was pronounced dead at the scene of the accident.
His passing prompted a huge outpouring of grief in South Africa and his loss is still keenly felt.

“Thomas was like a brother to me,” reflected Pitso Mosimane, a former team-mate of Madigage’s and who went on to manage new Rangers signing Zungu at Mamelodi Sundowns.
“I looked after him when he came to Jomo Cosmos but afterwards he looked after me. He brought me to SuperSport United so it’s like the guy launched my career.
“So people like that you don’t forget. That chapter where you are saying ‘don’t forget where you come from’. Life can be difficult and you must have your people. As you do well, you must take them along with you.”

I was at the Clydebank match , Madigage and Makalakalane were both outstanding.
Didn't know he had died in such tragic circumstances , a real shame.

Was at that 4-1 game against City. But tbh, I was only there to see Coops.

Wugs said:
I was at the Clydebank match , Madigage and Makalakalane were both outstanding.
Didn't know he had died in such tragic circumstances , a real shame.
Click to expand...

I was also there, it was so exciting and exotic to have those two boys there, I actually quite liked Makalakalane, shame it never panned out, and tragic what happened to Madigage. (Stupid, but I always tried to fine them on Championship Manager back in the day)
B

Sad story. I remember both the lads coming. I had no idea of his sad passing.
B

Wugs said:
I was at the Clydebank match , Madigage and Makalakalane were both outstanding.
Didn't know he had died in such tragic circumstances , a real shame.
Click to expand...

Me too , I remember the two South Africans , but don’t remember much about how they played if I’m honest .

Thanks once again @dh1963 for your research and for posting this intriguing but ultimately sad story. I do remember them signing and was hopeful that both would do well, and that SA would provide us with a new source for players. So tragic.

cadge_1959 said:
Thanks once again @dh1963 for your research and for posting this intriguing but ultimately sad story. I do remember them signing and was hopeful that both would do well, and that SA would provide us with a new source for players. So tragic.
Click to expand...

I can't take credit for this article, it's lifted from The Scotsman last week.

That’s really sad, genuinely didn’t know he had passed away.

Echo the above sentiments. I remember them both being on trial, for a short period, but no idea about the tragic accident.

I remember my Grandad phoning me and being really excited about them as he had seen them at a reserve game.

I remember being very encouraged when these guys signed.
A bit of success for them could open a door for us down there, and it started so well for them.
I also remember being disappointed when they left and wondered who held the ten work permits.
I’m sure I’d read about the kid dying but I’m just as certain I didn’t read about the car crash.

These threads by dh1963 are brilliant. I never stop learning about Rangers.
T

The Moon on Mars is Blue

I was at the Clydebank game and they both looked like players. Such a sad end

Beautifully relayed, as usual, and a genuinely tragic story.

Thanks for posting the story. I did remember the duo names at the time but never saw any of them playing, unfortunately.
J

Played against them in Darvel’s centenary game which was Davie coopers last game for the famous , john mcgregor was in charge of the team and brought the two of them on when we were tiring , quickest players I ever played against
R

Had started to think I’d imagined those two when I was a lad. Interesting read but a sad end

Sad story that, sounded like a nice lad.
Love these stories DH.
P

Most of our fans are only there to see The Rangers.

Was at the Clyde game he played in

tazzabear said:
I remember being very encouraged when these guys signed.
A bit of success for them could open a door for us down there, and it started so well for them.
I also remember being disappointed when they left and wondered who held the ten work permits.
I’m sure I’d read about the kid dying but I’m just as certain I didn’t read about the car crash.
Click to expand...

There was some sort of rota, if that’s the right phrase.
We were next up, and were waiting on a foreigner at east fife to leave.
Someone might have a more accurate account of this.

Great article again Dh . I remember the hype about both guys. Sad what happened to Thomas.
B

Great read, thanks for sharing

Remember him & his mate from youth games at the local Rose's park.

What does this mean?


Is it because the two in the 80s didnt actually sign?
B

I remember watching them both closely during the warm up at Kilbowie. TM was striking the ball downwards into the ground to make the ball bounce up. An old boy behind me was gobsmacked and shouting ‘whits he daein’ old boy had never seen anything like this in his life before.
Sorry it never worked out for them. Killed by a donkey FFS!

Had never heard of him. Thanks for sharing. Found this after a quick Google. 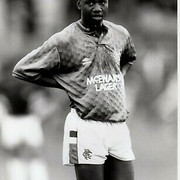 Luthgibear said:
Remember him & his mate from youth games at the local Rose's park.
Click to expand...

I remember watching them up at Prestonfield too, I was thinking about these two the other day when we signed Zungu.
It was great going to watch the reserves there. Sometimes you’d get the first teamers coming back from injury.
And you’d get on the pitch at half time to rattle a few shots into the net.

Sad story and remember when the both boys arrived , did the donkey survive?
M

I was at the Clydebank game & took a keen interest as I had only returned from SA a few years before.
There was some amount of individual talent in that country, just needed harnest.
I remember talking to Jim Steele when he came to SA with an "American " select team it was a bit of a jolly for these guys but a young talent called Jomo Somo ripped them apart so much so he was then taken to America to further his career, I would have liked to see how he would have coped in Europe.