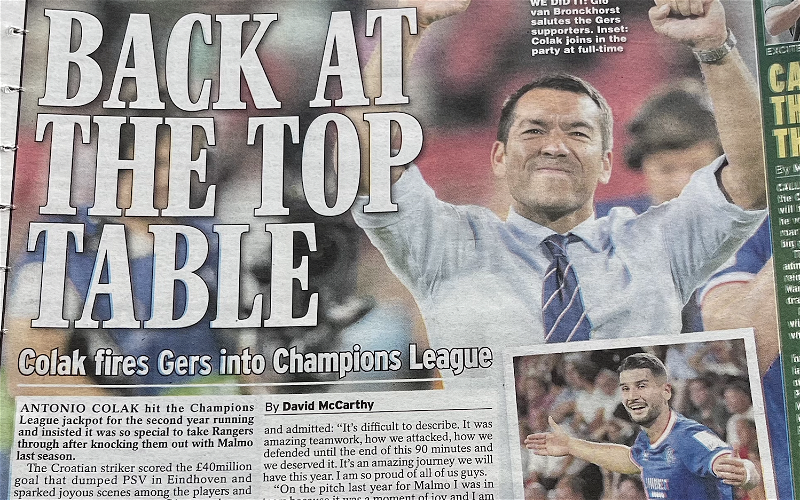 From the bleakness of a last-minute draw at Peterhead to a return to the ‘big table’ (with a wee stop off in Seville) last night’s performance was final affirmation that Rangers as a club are truly back. Of course winning the league title is our bread and butter, but life needs to offer the occasional extravagance and the Champions League is club football’s ultimate treat.

The fact that the first quarter was ours, confirmed that PSV are a good team, but no world beaters. A series of corners – those floating outswingers continue to drive me up the wall – produced little and Kent’s ability to create a chance only to blast high and wild continues. Even at this early stage however, Malik Tillman was stamping himself as the best player on the park aided by the ever-reliable Lundstram and a calm, intelligent performance from Glen Kamara. Kamara’s inclusion is yet one more example of Gio’s ability to make a surprising, but astute, call.

For no obvious reason, the period of play up to half-time, and then ten minutes into the second half, swung towards Eindhoven. The Sands-Goldson partnership continues to be a developing, but imperfect one, and at this level even small errors can lead to chances: Sangare from a corner; a Saibari shot; and then De Jong almost on the end of a Teze cross were the pick of the chances. Gakpo’s miss right on half-time may also have had Manchester United re-considering the £42 million they are apparently splashing out to add to their chaotic circus of a team.

The fifty-sixth minute was when Rangers re-appeared as an attacking force.  Some good work down the left found Lawrence on the edge of the box and his shot hit the underside of the bar. In his own quiet way, Tom Lawrence is developing into the midfielder Rangers’ fans have been waiting for for several years: genuinely box-to-box, can pick a pass and is always looking forward. His drive and leadership qualities are going to be a huge influence on the team this year.

The origins of the Rangers’ goal on the hour lie with Pep Guardiola.  Manchester City’s ability to pass the ball from goalkeeper to centre forward is mesmeric and truly a thing of beauty.  With most other teams, it’s simply that old-fashioned term “fannying about”. PSV – specifically keeper Benitez and centre-half Ramalho – were caught in F.A. mode by the ever-alert Tillman and his calmness in slotting the ball to Colak belied his twenty years. This was very much a coming-of-age game for Malik, maybe proving to some doubters that he can not only last the full ninety minutes, but continue to show the classiest of touches, flicks and spins. I wonder if we will take up the option to buy?!

A word for scorer Antonio Colak.  Derided by some earlier in the season for not instantly hitting the heights, and then criticised by many this week simply for not being Alfredo Morelos, Colak does look like a good fit for this Rangers set up. His performances are honest and he clearly has a fine eye for goal. Antonio’s post-match comments that “Rangers are the best club in the world” also suggest he appreciates where he is and doesn’t come with some of the drama queen antics some of us have grown tired of. Colak is our centre-forward and he is a keeper.

Incidentally, Ramalho was last seen kung-fuing various parts of the PSV bench and dug-out after being immediately removed from the action.  You just don’t want to be doing that fannying about big man…

Eindhoven did pressurise Rangers in the final thirty minutes, but John McLaughlin wasn’t majorly troubled: his save from Gakpo on seventy-four minutes was McGregoresque.  Big John’s commanding performance surely cements him as this season’s number one and his comments after the match underlined what a calm, intelligent chap we have at the back.

A wee mention of Lundstram’s sixty-fourth minute tackle on Simons (a lovely footballer incidentally.) It was cynical and instantly stopped the PSV attack. You just know that a certain “Willie” was at home meekly shouting “Red!!” at his telly, before being gently led to his bed.

The last word deserves to be saved for Giovanni van Bronckhorst. Can we now please give the guy the respect and time to manage the Rangers team rather than questioning him every time a game is lost, drawn or, god forbid, a managerial mistake is made? The game by game assessment of his merits is ludicrous and ultimately unhelpful. It’s football, it’s not meant to be perfect.

This was a historic game and no doubt there are moments missed and overlooked here. However, it was one of those games – and they don’t happen often – where the bigger picture overwhelms the detail. Back at the top of European club football…and we didn’t even have to win the league to get there!