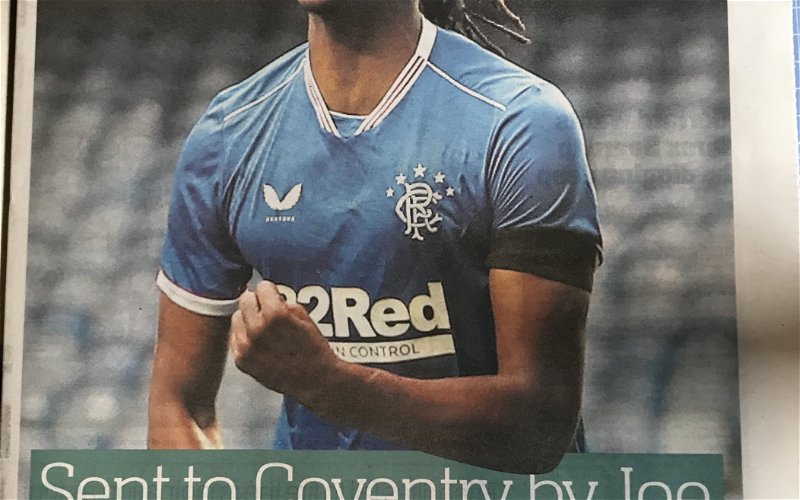 It’s fair to say that in the first few months of his time with Rangers, the fans were a little unsure of Joe Aribo. There may have been glimpses of skill and trickery, brilliant ball control and precise passing, but his gangly gait and slender frame suggested he was a little on the light side to stand up to the rigours of Scottish football. He could be a bit over elaborate at times too.

But if you were to canvas opinion among the supporters today then most if not all of them would have Aribo’s name on the teamsheet first. Steven Gerrard rated him highly, and he has been to the fore in the four games played under Giovanni van Bronckhorst too.

In his post-match press conference after the win over Dundee last Saturday, the boss was effusive in his praise of Aribo. Gio pointed out that he wants midfield players like Joe to be flexible such that he could play as a ‘6’ or a ‘10’. And Aribo has been superb in both positions since van Bronckhorst took over, on some occasions playing both roles in the same match.

Although only 25, Aribo has a significant influence on the team. Since joining the club, the Nigerian international has only been absent from the matchday squad 15 times. And 10 of them were in succession, an ankle injury ruling him out from 16 August until 4 October in season 2020/21. Of the 118 appearances that he has made, he has completed the 90 minutes in 74 of them (62.71%). And 113 of them have been as part of the starting XI.

He has shown real dexterity in those games too. He has played across the midfield – right, left and centre – and both defensively and offensively too. Aribo even filled in at left back in the last two league games of season 2020/21.

While there is no doubting his influence, the debate among the supporters at the moment is regrading where he is most effective. Prior to van Bronckhort’s arrival, my preference was for Joe to be in the midfield three alongside the likes of Steven Davis and Glenn Kamara. Steven Gerrard used to play him further forward in European ties, though, and I know there are fans who feel that’s where he is at his best.

However, when you analyse the stats, they suggest he has only been in an attacking midfield role for roughly 25% of the games he has played for Rangers. In that position, he has scored six goals and created four. In the 41 games he has played in the centre of the pitch, he has netted 10 times and provided eight assists.

What these numbers do, though, is reinforce that Joe can create the ‘mayhem’ his manager wants him to in either position. But under Gio it appears he has been given more licence to roam than he did under Gerrard. He has matured and can now read the game better. For the most part, the decisions he has taken regarding the positions he should take up as each game evolves have been spot on. And the upshot is that Aribo is fitting the description of a hybrid midfield player perfectly.

He makes a telling contribution at the sharp end of the pitch. Aribo has scored 22 goals for Rangers and has 19 assists. When he scores, invariably Rangers get a positive result – in the 21 matches he has scored in; Rangers have won 20 and drawn one – and in terms of assists, only James Tavernier (44), Borna Barisic (30), Alfredo Morelos (26), Ryan Kent (25), and Ianis Hagi (21) have created more goals since Aribo signed in July 2019.

But playing the final pass isn’t necessarily what Aribo is about. His trickery and powerful running are key factors in the Rangers gameplan, and if you were to wind the moves that ended with a goal back then you would see a much higher percentage of goal involvements. And for someone who plays in midfield, Aribo shows excellent discipline, with only 13 yellow cards picked up thus far in his Rangers career.

Given that Aribo is left-sided, it won’t come as a surprise that the majority of his 22 goals are finishes with his left foot (72.73%). Indeed, of the eight goals he scored as we marched towards 55, only one, a header against St Johnstone, wasn’t executed with his left foot.

The best of his 22 goals must be the sensational solo run that got Rangers back on level terms against SC Braga in the Europa League in February 2020. It epitomised what Aribo has to offer: poise, balance, quick feet and a fine, composed finish. That goal was a vital one too, restoring parity on a night when Rangers looked dead and buried at 2-0 down.

But how do Joe’s numbers compare to those that play in a similar position? This season, Aribo has played the majority of his 27 games in either central midfield or attacking midfield. From central midfield, he has scored two goals and provided two assists in eight appearances, and three goals and two assists in 11 appearances as an attacking midfielder. Across Glasgow, David Turnbull has played 22 times in central midfield, scoring seven times and creating five goals. As an attacking midfielder, he has seven appearances and one assist. There is almost parity there, yet Aribo is the one being talked about as being front and centre for a move to the English Premiership. And that’s because there is so much more to Joe’s game than what Turnbull offers Celtic.

Joe Aribo is now close to being indispensable. Although he is likely to be away with Nigeria for the African Cup of Nations in the New Year, you wouldn’t expect him to be out the team other than that unless he is injured or rested. Given he is now working with a manager who was a predominantly left sided, dexterous midfielder for part of his career then his game will only get better.

That means Aribo is becoming a marketable asset, probably our most sought-after player just now. With only 18 months left on his current contract, it is ‘stick or twist’ time for the board. You would hope they will offer him a new deal – although Ross Wilson has said we won’t break the wage structure for any player – but they might also be open to offers in the January or summer transfer window. Wilson has also told us that the club don’t need to sell, but every player has their price, and Aribo might be tempted by the bright lights of the English top flight.

It’s not a decision I envy. One thing is certain, though; when Aribo leaves Rangers, he will leave a large void in the squad that will be difficult to fill.