Rangers 1 v 0 Livingston – Taking Our Eyes Off The Horizon 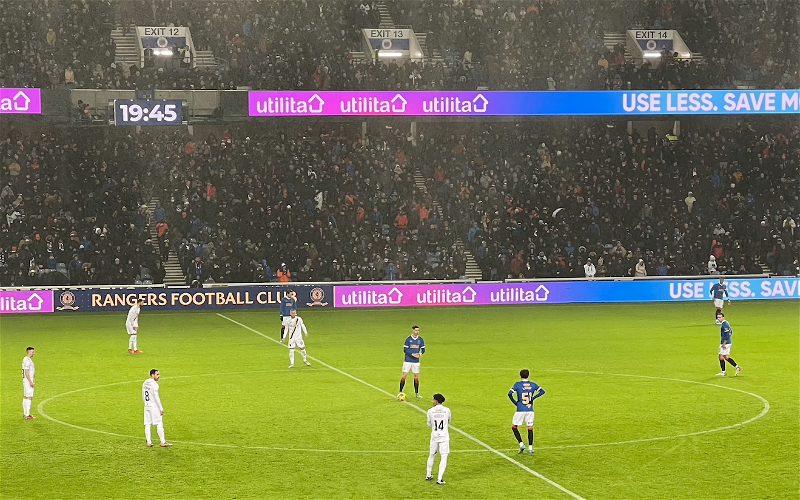 The Old Firm match and the frenzy and fervour that goes with it looms large on the horizon. It’s within touching distance. There is no doubt that we are all looking forward to the match and the opportunity it gives Rangers to get one over on their arch-rivals and stretch their lead at the top of the table. But that excitement had to be tempered when Livingston came to Ibrox. After all, the same number of points were available to be picked up or dropped in this game as there are in the Old Firm, and points frittered away in this one would have been calamitous. And with Celtic in Edinburgh to face Hearts – a notoriously difficult venue where they lost earlier in the season – the onus was on Rangers to take care of business against David Martindale’s side.

The buzz ahead of the match was over team selection and possible player recruitment. With little other than speculation to stimulate debate on the latter, talk focussed on the former.

The players rested against Stirling Albion were expected to return, and there was a lot of chatter about who would fill the breach left by the unfortunate Ianis Hagi. There were also discussions over whether the talismanic Joe Aribo would feature upon his return from African Cup of Nations duty and whether the latest protégé, Alex Lowry, would make the squad.

Giovanni van Bronckhorst has made a habit of keeping consistency in his selection. The only impediment on that strategy has been injuries, international commitments, and suspensions. But with only Hagi (knee), Morelos (representing Colombia) and Kent (suspension) definite absentees from the manager’s core team, most expected a familiar XI to take to the field. That, however, wasn’t the case. There were starts for James Sands, Alex Lowry and Cedric Itten, with Fashion Sakala and Scott Wright patrolling the wide areas. Key men among the substitutes were Ryan Jack and Kemar Roofe.

Livingston, who won their first league game after the winter break 2-0 against Dundee thanks to a brace from Bruce Anderson, didn’t have history on their side coming into the match. Since drawing 0-0 on their first-ever visit to Ibrox on league business in August 2001, they had lost 12 of the other 14 contests in Glasgow, shipping 38 goals in the process. One therefore expected a stiff rear-guard action from the visitors to ensure that that number didn’t get any worse. They were hardly likely to go gung-ho either, having only scored seven times in the previous 15 Ibrox encounters. The fact that three of those came in one match – a 4-3 Rangers win in December 2002 – amply illustrated the point that Ibrox had never been a favourite venue for the visitors.

There were familiar faces in the Livingston side, with former Rangers players Jason Holt and Andrew Shinnie in their engine room. And Martindale also placed his faith in former Aberdeen forward Bruce Anderson to plough the lone furrow up front. Anderson was Livingston’s top goalscorer in the league having netted seven of the 18 goals Livingston had scored.

The weather at kick-off can be best summed up by the words ‘driech’ and ‘blustery’. Although that may have been a deterrent for the travelling support from Livingston – they were all huddled together under the giant screen in the corner – there weren’t many empty blue seats in the Ibrox stands. This was confirmed when an attendance figure of 48,343 was revealed.

Itten kicked off proceedings, and immediately Rangers shaped up in the expected 4-2-3-1 formation. Lowry was playing as the 10, with Wright on the right, and Sakala on the left. Sands and Kamara were the deep-lying midfielders. Meanwhile, Livingston in their change colours of predominantly white, with single black and yellow diagonal stripes adopted a 4-1-4-1 set up, with Holt sitting in front of the back four. Martindale later suggested it was 4-3-3, but it was certainly looked a more conservative approach than that.

The first half chance of the match fell to young Lowry after only three minutes. A careless pass from Fitzwater was intercepted by Sakala. The Zambian tried to wriggle into a shooting position, but with space at a premium, he teed up Lowry who shot from range, but his attempt was straight at Stryjek.

Lowry showed some assured early touches, but he was the only Rangers player who was prominent in a frustrating first half. With both managers on the edge of their respective technical areas, hands thrust in pockets, they witnessed a scrappy start with very little in the way of fluent football.

That pattern didn’t really change, and it was all rather disjointed. Rangers were missing the promptings, passing and energy of Joe Aribo, the guile of Ryan Kent and the power and relentlessness of Morelos. Itten tried to fill the void left by the latter, trying to take the ball into feet, hold it up and bring others into play, but more often than not the ball wasn’t sticking, and possession was turned over easily.

After 21 minutes, Glenn Kamara tried to spark some life into the game when he burst forward. His pass released Itten, but the Finn continued his run. He was impeded off the ball by Omeonga, and referee Dom Robertson awarded Rangers a free kick. Barisic and Tavernier stood over the ball, the former eventually stepping forward, but his attempt at goal didn’t clear the wall.

There followed a bright spell as Rangers tried to build up a head of steam. Scott Wright, who had a night to forget, delivered a cross into the penalty area that was punched clear by Stryjek before Lowry fired in a low ball that no one could get a telling touch on.

This roused the fans, and they were off their seats after 25 minutes ready to acclaim a goal when Wright, receiving a pass from Lowry, got the ball out of his feet and shot for goal. Alas, although his effort beat Stryjek, Fitzwater cleared the ball off the line.

After Kamara became the first Rangers player booked for an innocuous looking foul, Lowry showed great feet on a jinking run towards goal. He played a superb ball across the six-yard box that a stretching Itten only just failed to make contact with. From the corner kick that followed, Goldson headed over the bar.

Despite this, it was still very much a ragged Rangers display. It was all very tight and congested, but six minutes shy of the interval, a rare clear-cut chance was created. A couple of one-twos were worked down the right and when Tavernier found Sakala in front of goal, you expected the net to bulge. Unfortunately for the industrious Zambian, Stryjek spread himself well and diverted the ball over the bar.

That was the last action of what can be summed up as a poor and scrappy first half. Aside from a few glimpses from Lowry, there wasn’t much to shout about, and with Celtic ahead in Edinburgh, the second 45 minutes were shaping up to be the most important for a long time.

There were no changes at half time, but there was a bit of positivity about Rangers’ approach early in the second half. A couple of minutes after the restart following good ball winning from Lowry, Sakala tried to make space for a shot, but the ball broke to Itten. Unfortunately, the big Swiss striker couldn’t get the ball out of his feet to shoot or release a pass to an unmarked Wright. And a minute later, Itten headed wastefully wide when well placed.

Play then reverted to the stodgy and stale fare that had been dished up in the first half. It was one of those nights when you felt a single goal would settle the nerves, but nothing clear cut was being created. And there was always the chance of being caught on the counter which was illustrated when Anderson was in the clear but saw his shot saved by the foot of McGregor. Although it wouldn’t have counted as the offside flag had been raised, the fact that Livingston were showing intent did little to calm the masses.

But there were changes afoot. Van Bronckhorst left his position at the edge of the technical area to converse with Dave Vos in the dugout, and Arfield and Roofe were sent out to warm up. And within a matter of minutes both were thrust into the action. The changes may have been like-for-like – Arfield replaced Sands, while Roofe came on for Itten – but they eventually proved decisive.

In the interim, though, the howls of frustration from the crowd were getting louder. Scott Wright was the focus of the supporters’ ire. This was a real opportunity for the former Aberdeen player. With Ianis Hagi ruled out for the rest of the season, the berth on the right-hand side was up for grabs. But Wright had a poor game and twice inside a matter of minutes, he passed up good opportunities, firstly overrunning the ball then blazing the ball carelessly across goal when a shot on target was perhaps the better option. He was eventually withdrawn, his replacement, Ryan Jack, getting some much-needed minutes into his legs.

With 19 minutes to go, the previously untested Stryjek had to be at his best to keep the scoresheet blank. Fashion Sakala loves playing in the wide role and there were times when he was like an old-fashioned winger, dribbling the ball, injecting pace, and running at the full-back. And from one such attacking burst, he unleashed a rising shot that drew a superb save from the Livingston goalkeeper.

Sakala was later voted man of the match, which based on his industrious approach was richly deserved. However, on reflection, the Zambian and his manager both admitted that there were times when he took one touch too many or tried to beat another defender when a shot on target was the better option. That’s all part of the learning curve, though, and you can’t help but be captivated by the enthusiasm this young man shows for the game.

Nonetheless, the deadlock still hadn’t been broken. But the elusive breakthrough finally arrived with 15 minutes to go. Scott Arfield is one of a number of players to have emerged from the shadows to thrive under van Bronckhorst and his runs from midfield have often reaped a rich reward. And after embarking on one such run, he showed brilliant improvisation to get on the end of a dinked cross from Borna Barisic. The ball looped up and over Stryjek, and when the dust settles at the end of the season, this may well be looked upon as one of the most important goals of the campaign.

After the goal went in there was suddenly a zip about Rangers’ play. The noise level rose in the stadium too as the rain swirled to such an extent that those of us on the gantry needed window wipers to keep our laptop screens clear.

There was never any danger of Livingston finding an equaliser – Allan McGregor chalked up his 201st clean sheet for Rangers without having a save of any note to make – and had Roofe timed his run better as the clock ticked on to 90 minutes, Rangers could have netted a second goal. The Jamaican was released by a slide rule pass from Arfield, but the assistant referee in front of the Bill Struth Main Stand raised his flag for offside.

Patience is said to be a virtue and it certainly paid off for Rangers in this one. This was the perfect example of winning ugly and grinding out a win. It could well be the most important three points chalked up this season so far.

Attention now turns to Dingwall. We must remember to keep our eyes off what looms on the horizon and take care of business on Saturday lunchtime.

The chase for 56 continues.