Why Newsquest are a problem for Rangers 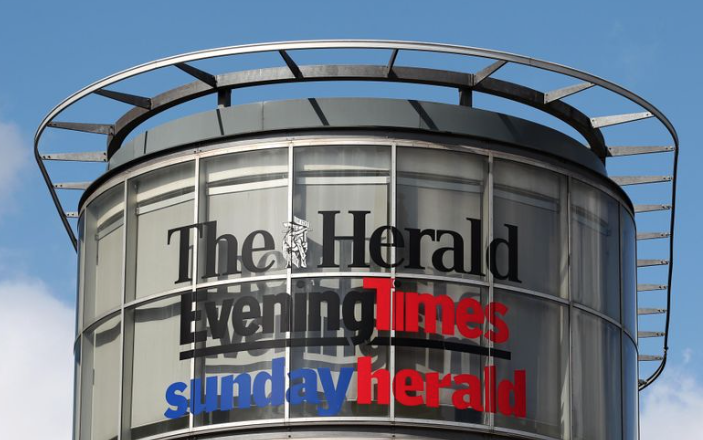 Newsquest – the publishers of the Herald, Glasgow Times, Sunday Herald and The National – are deeply antagonistic to Rangers FC.  As such, they are a problem to be faced up to and solved.

Growing up the then Glasgow Herald was the douce ‘paper of record’ for the West of Scotland.  Conservative with a small ‘c’ but respectful of old-style 1945 Labour.   The Evening Times (now the Glasgow Times) was the evening paper of the city, which battled with the Evening Citizen (which our house took) until they took over the Citizen in 1974, offering a folksy mix of hard local news, investigations and good news feature articles.

Only later in life would I start to take an interest in the politics behind the papers and what in my lifetime drove them to a point where Newsquest would produce the vitriolic The National – the Völkischer Beobachter of the Yes movement.

With regard to Rangers, the Herald in particular never had a problem in Rangers bashing – going back into the 1960s with the creepy Cyril Horne and his outrageously biased coverage of the club to Ian Archer in the 70s/80s and Spiers et al from the early 2000s.  Their anti-Rangers stance is not a new phenomena – but from the early 2000s it has been on steroids.

Rangers and their directors are not, I must say, entirely without blame.   Generally they regarded newspaper coverage like the weather – some days it was good, some days it was bad.  They tended to be businessmen and not politicians and the area of PR was neglected – for them PR was photocopying the team lines for the visiting journalists at a game.

Meanwhile, as sports coverage became more politicised, Rangers were more and more open to being traduced and stereotyped with the Herald often the main culprit.

The real rot and open hatred set in during the early 2000s under the rule of the triumvirate of Mark Douglas-Home as editor, Kevin McKenna at sports and Joan McAlpine as deputy editor.  With the sports desk largely cleared of Rangers fans and Mr. Spiers installed it became a Mad Hatters Tea Party of abuse and attack.  Later on would come characters like Neil MacKay and Angela Haggarty amongst a host of others.

The anti-Rangers bias is now as bad as it has ever been – you just have to look at their coverage of the celebration party in George Square for 55 where their online outlets had 19 negative stories in two days.  So bad was their coverage that week, and I will give you the fact they were not alone in this, that you could easily have missed the fact that Rangers had won the Premiership.

There are, of course, things to like – their Times Past series, local news coverage, the Saturday magazine in the Herald is always lively with unusual and informative articles.  But all four of their titles regularly give free reign to ultra-nationalist drivel far beyond the boundaries of the official SNP.

Consider for a moment their coverage of Orange parades in the last two years which has contributed to violence in the streets – and some of those literally ablaze because of the nurturing and promotion of the vile Call It Out organisation by Newsquest titles which has poisoned this city and somehow helped make ant atmosphere worse than anything seen here during The Troubles.

The Orange have been demonised – no truth, no balance, no right to reply – by a constant negative pouring of poison.  Consider them publishing maps of the city with ‘flashpoints’ where Orange parades pass Roman Catholic places of worship.  List of streets where parades take place, claiming there are 51 parades on a single day, the desperation to report any incident – even if sometimes eight years old.

More importantly- they know exactly who Call It Out are and the pro-IRA credentials of all their leading figures, yet present them as crusaders against anti-Catholicism. They don’t do that because they are ignorant of the political biographies of Findlay and Haggerty – they CHOOSE to hide those vital facts from their readers time and time again.  Instead of exposing Call It Out they promote them and their vile anti-Protestant agenda.

There was a recent article about the conviction of a lad involved in disorder at Govan where the report in the Times quoted six different bodies about him – police, Nil By Mouth etc. At a time where resources are stretched think of the effort that took. It’s not normal.

You may, of course, say what has that got to do with me?  I’m not in the Orange, I don’t like flute bands, I’ve never been to Northern Ireland.  To do that you are missing the point – by polluting their pages with this sectarian filth the Newsquest  group are playing exactly to the furthest fringes of the lunatic element of the Celtic support and normalising it.  To them – as a Rangers supporter – you are an Orange bastard whether you like it or not.  That’s their view.  And incredible as it may seem in the 21st century Newsquest are facilitating that hate.

A few years ago Newsquest directors promised a change with Haggerty and MacKay out and a change in direction.  That didn’t last long as their revolting stomach-churning coverage proves time and again.

Now Newsquest have come up with a wheeze to part Rangers fans from their hard-earned by providing a subscription service called The Rangers Review.  To be fair, apart from serial wonk Jonny McFarlane, there have been some great articles to come out of it.

But the problem is this – it’s the fruit of a poisoned tree.   Your cash is going into the one pot – the same pot which provides not just dividends for Newsquest shareholders but subsidises their news and sport output across their titles – in short you are paying for The National’s sports coverage.

Think about it: a service using the name Rangers in it, about Rangers, for Rangers fans – but it subsidises hate of Rangers fans in their papers.  What do Rangers get out of that?

There is a simple solution to this problem that Newsquest have got.  Ditch the hate and the haters you indulge.   It’s the right thing to do. But it’s as likely as a season going past with no manufactured controversy.