Bobby Brown – A Life in Football, From Goals to the Dugout 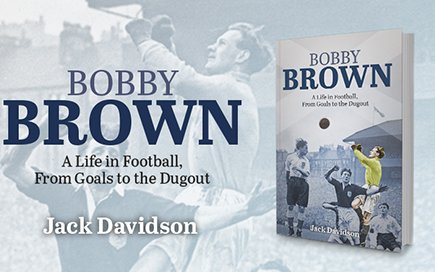 As a special treat to FF readers Pitch Publications have arranged to make the first chapter a free to read download for us! – http://www.pitchpublishing.co.uk/shop/bobby-brown

This is Bobby Brown’s remarkable life in and out of football, highlighting his debut as Scottish manager in the famous Wembley win over world champions England in 1967.

The last surviving member of the first Rangers “Treble” winning squad has more than a few tales to tell and the author Jack Davidson, a retired QC, has done a great job in both presenting the details but keeping the book rolling along like the Boys Own tale it is.  A fantastic read.

The book charts his progress from  schoolboy playing for Queens Park to Scottish international goalkeeper in wartime and after, drawing on countless original interviews and fascinating press cuttings gleaned from Brown’s own scrapbook. His Fleet Air Arm service is recounted, as is his honours-laden Rangers career, including his part in the first ever ‘Treble’, in 1949, as part of the club’s fabled ‘Iron Curtain’ defence. As a PE teacher, Brown was a part-timer in a full-time team, and he reveals the pressures that created.

His first managerial job at St Johnstone preceded being national manager, whose ‘highs and lows’ are recalled along with insights into many of the Scottish game’s leading figures. In 1971 Bobby left football to be a successful restaurateur and businessman. His non-football interests are covered including the outdoors, the church and family life – along with his delight at induction to the Scottish Football Hall of Fame.

Read Bobby Brown: A Life in Football, From Goals to the Dugout and you will discover: