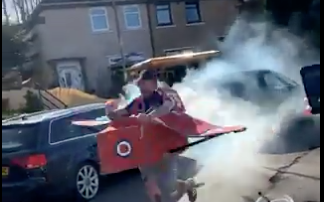 Rangers came away from this tie at Celtic Park with their undefeated in the league campaign record untainted in a game which Celtic dominated for long periods.

The first fifteen minutes of this game were very much a chess game with both teams very tentative in their approach, testing one another out and playing safety first.

One of the few highlights was a Barasic cross which Morelos headed straight to the keeper from inside the box.

In the 23rd minute the game livened up – Celtic played down the left – Calum McGregor slid the ball to Edouard who crossed into the path of the diving Elyounoussi who headed into the net.

There was a heart in mouth incident shortly thereafter when  Eduard was booked for diving – a Barasic tackle went in but the Frenchman bizarrely chose to dive rather than hit the first time shot.

Seven minutes before half-time a corner from Barasic headed down by Balogun and it ricocheted up – it wasn’t going in but bounced up and Alfredo Morelos snuck in at the right hand post to head the ball into the net.

There was a flurry of play before half time as Eduoard stepped over and relayed the return pass from Elyounoussi – shot stopped by McGregor, but the ball popped out and he had to to scramble to save.

A minute later Kent was up in the Celtic end when the ball came over – he hit it first time on the volley as the long ball dropped over his shoulder and Scott Bain had a terrific save.

As halftime loomed an Ajer header was saved well by McGrgeor who scooped the ball away.

Ten minutes into the second half Balogun who had laboured well but rather vainly in the right back position was replaced by Nathan Paterson.

Celtic were making more of the play and Steven Gerrard brought on Arfield on for Hagi.  Arfield immediately had a word with Aribo who moved further upheld.

This was a gripping match for the partisan but not a game for a neutral.

In the fifteen minutes Gerrard sought to liven things up by bringing on Roofe and Wright who replaced Aribo and Morelos.

In the last ten minutes Rangers enjoyed some consistent pressure – a couple of chances and recycling  the ball back into the danger area mostly due to the good work of young Nathan Patterson who kept the ball alive on the right.