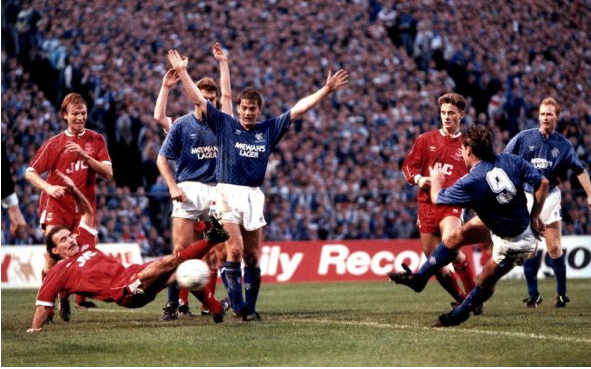 By The Govanhill Gub

It’s not often you get a Saturday off in the run up to crimbo but thanks to Covid and penalties (copyright, the diseased of mind) here I am sitting here hankering for that ice cold beer, but hey, ten o’clock can wait!

Anyway, just thinking of how far this current team of ours has Progres’sed,, if you’ll pardon the pun, I’ve been thinking of how they are starting to match up to Autumns of yesteryear?

1977 – That season started off shakily with two defeats but after that the side began to motor. With wee doddie and Bobby Russell in midfield, aided and abetted by Tommy McLean out right and the Coop on the left and with Gordon Smith and DJ threatening to score everytime they got the ball in the box, some of our play was sublime.

Two matches stand out, coming back from two goals down to you-know-who at Ibrox in the September and the demolition of dolly the following month in the LC, that was at the time, the best sustained play I’d seen from a Rangers side.

The rest as they say is history, a well deserved treble rested in the Ibrox trophy room the following May.

1988 – All in all a blistering start that season. The third season into the ‘Souness revolution’ and it was all starting to come together. Gough’s pace and athleticism offsetting Butcher’s increasing lack of mobility but still with the ability to rake out those superb passes from the back we were secure in the centre back position. Add in the athleticism of Gary Stevens at right back and all in all it was a sound defence.

Up front the mesmerising Mark Walters had all but replaced an ageing Davie Cooper, who would go onto prove at Motherwell, that class will always out. Up front McCoist was well, just McCoist with a powerful but skilful foil in Kevin Drinkell to chip in with his fair share of goals.

In midfield we had the classiest ‘crab’ in the business in Ray Wilkins. What a bargain of a footballer he was. Superb user of the ball, thoughtful, measured and he could smash in a rare volley.

But if Wilkins used his experience in midfield it was the confidence and brashness of youth in Ian Durrant that could light the place up. There was no telling what this young man would have achieved. It speaks volumes for his bravery and inner strength that he could still come back from what happened and play at the top level for Rangers.

For me we were never the same after that horrible day in October 88 at Pittodrie and I still maintain to this day that, that 5-1 drubbing of the yahoos in the August was the first and only time in that real NIAR era that Rangers played an OF game with a full strength team.

There would be no treble at the end of that season, but I’m pretty sure referee, Bob Valentine, received a special SC winners medal for what went down in the final. For me, the Autumn of 1988 shades it from the class of 77.

1999 – And boy did we party. I still maintain to this day the four months I witnessed from Rangers up until Mols’ injury in Munich is the best I have ever seen. In the end up we didn’t qualify from our CL sections but we know the reasons why.

Mols was simply sensational and although it was a magnificent team effort to beat Parma in the CL qualifier, Mols was the key. His touch, control and his ability to hold the ball in the away leg for me was the difference in us qualifying and another ‘glorious failure’.

Probably one of my biggest regrets as a Rangers fan is that I never got to see Mols before his injury against the yahoos. Can you imagine smiley miley turning Mjallby and Stubbs inside out? As the old cliché goes, they’d have been substituted with twisted blood before the end of the game.

Of course this pair of thugs in studs would have resorted to type and tried to main oor Mikey, but they wouldn’t have got near him. Like Alan Morton’s hanging lob, like a Waddell cross right onto Thornton’s head, like a Baxter pass, the Mols’ turn (and I mean specifically before his injury) was a thing of beauty and the stuff of Ibrox legend.

Despite that injury, the side still played the best football I’ve seen from a Rangers side in my puff. It ended in the carnival that was the ‘Oranje Cup final’, but although we didn’t know it at the time, woes were just around the corner.

We have witnessed year on year since 2018 a gradual evolving of the side. Yet without wishing to sound like a yahoo, the league was there to be won in the previous two seasons, but from January onwards the side/squad turned to mush, That suggests to me there has been to much brittleness and a fragility within the squad as a whole.

Again, without wishing to put a hex on things, things seem to be boiling at a higher simmer this season.

Borna last season and now, is the bandage-heided player we saw against us and prompted us to buy in the first place. Both he and our captain, Tav, are the best full back combination I’ve ever seen. When their crosses are on song (and I think Borna’s is the more consistent of the two) they can be sensational. Tav’s goals contribution and assists speak for themselves.

The central defenders have been playing mostly, mostly with higher concentration levels and hopefully this continues. Well actually it must. My only criticism here is I’d prefer a consistent pairing instead of chopping and changing but what do I know?

Our midfielders have shown that on their day they can be a match for anyone, certainly in this place. For me Aribo and Kamara should be the lynchpins but the mix and match has been working up till now and anyway all teams need the different strengths to succeed.

Another word about Kamara. He must be the best 50k purchase we’ve ever had. Wee doddie was special but that 50k was a whole world of a financial difference 52 years ago.

Then there is the attack? First there is Alfie. At times in the second half of last season I despaired of him, especially after the magnificence of his contributions in the first half. Yet, this season, although the goals don’t seem as proficient, his work for the team sometimes seem to me being at times slightly undervalued. He could still be doing with curbing that petulance, mind.

As for Roofe? I’m beginning to wonder if wonder goals are going to his speciality? But his overall link up play is really starting to take off. Itten has failed to hit the heights thus far, but he won’t be the first newbie, or the last, who takes time to adjust.

A special mention must go to Jermaine Defoe. An absolutely superb signing and still at this time in his playing dotage he is still a poacher supreme. His goal the other week against Livi is possibly the most superb striker’s goal I’ve ever seen. The way he glided that ball in from Tav’s cross was goal of the season material, if it wasn’t for Roofe’s goal of the century a few night previously. But I believe JD’s biggest contribution to the club will be his presence and experience, and the parting thereof in training. I’d have him in a coaching capacity when he retires, in a heartbeat.

All in all we’re slowly but surely starting to look the part but the collapses of the past two seasons are definitely to the forefront of this tiny mind.

It was a certain Jock Wallace who told us in the winter to spring of 1976, that we’d be taking the rest of the season ‘one game at a time’. I have absolutely no doubts that Headmaster Gerrard and his assistant, McAllister are doing the same. Keep to those principles and who knows? This might turn out to be as lovely an autumn as we’ve ever had?

Go to it Rangers.