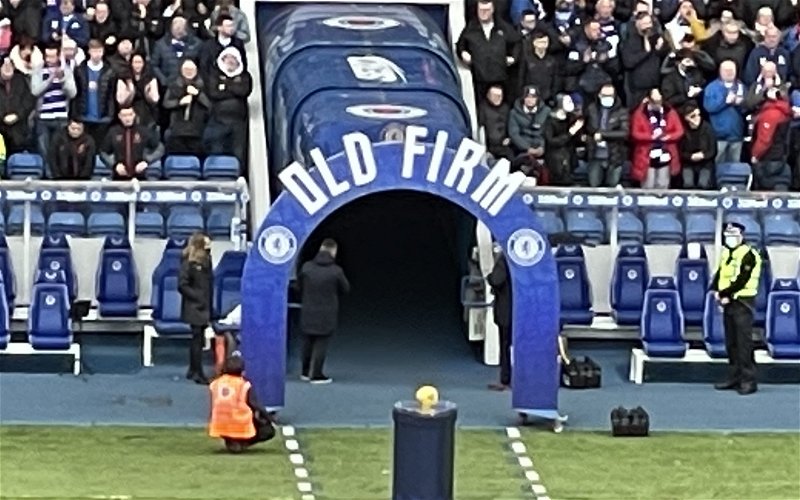 There is no such thing as a meaningless Old Firm game, but this one carried more significance than many of the other 111 league matches that the two Glasgow giants have contested since the cessation of hostilities at the end of World War II. The visitors arrived three points better off than Rangers at the top of the league. They had a much superior goal difference too and had dropped just two points in 2022. A tough nut to crack, therefore, but they had ridden their luck too often. It was hoped that that certain lady hadn’t travelled to Ibrox with them.

The stats above suggested that this was the proverbial ‘must win’ for Rangers. A draw may well have kept the title race alive too, but defeat and a six-point deficit with six games remaining would have left them with an insurmountable mountain to climb.

Giovanni van Bronckhorst, shorn of his talismanic forward, Alfredo Morelos, made four changes to the team that had beaten Dundee at Dens Park last time out. That meant he named what was the strongest XI at his disposal which meant an Old Firm debut for Aaron Ramsey. Fresh from 90 minutes with Wales in which he helped them to qualify for the World Cup play-off final, this was a third successive start for the Welshman. This was the type of the occasion he was signed for in January, and pre-match the Rangers fans hoped his staunchly coloured orange boots could be the key that would unlock the visitors’ defence.

The sunshine that had bathed the pitch shortly before kick off had disappeared behind a swathe of cloud when the teams emerged through the Old Firm archway. The pyrotechnics added to what was already a white hot and raucous atmosphere. Rangers were ready to reinforce the point that Glasgow was blue. In the end, though, all that would be blue would be the vernacular used to describe an insipid and uninspiring Rangers performance.

Yet it started so positively. Set up in a 4-2-3-1 formation with Ramsey playing as the ‘10’, Rangers were aggressive and pressing high, forcing the visitors into errors. For example, in the opening minute, Bassey bustled forward and was fouled by Jota. Tavernier’s dead ball delivery was superb and only just evaded a stretching Balogun at the back post. And a couple of minutes later great pressing from Roofe forced Starfelt into a hurried clearance, and the next passage of play brought the opening goal of the game.

Bassey, who was a shining light on a gloomy day, sent Kent away down the left, and his cracking cross was turned into the net by Ramsey. It was the perfect start and even this early, Rangers had the visitors flustered.

With Ibrox in full voice, the attacks continued to flow towards the Broomloan Road End. Ramsey, who was impressive in the opening gambit, tried a dinked cross but only found the gloves of Hart. And a minute later, a superb ball in from Tavernier almost presented Kent with a scoring chance at the back post.

But just sixty seconds later came what would prove to be the turning point as the visitors drew level with their first attack. Their captain advanced down the right flank and when ball reached Hatate he struck for goal. Allan McGregor parried his effort, but Rogic reacted first to equalise. Similarly to the Parkhead match in January, the Japanese midfielder was afforded too much time and space to execute his shot. Rogic had plenty of time to pick his spot too.

Yet again lamentable defending let Rangers down. Reference has been made to defensive deficiencies domestically since the winter break and how they have contributed to dropped points that have now rendered the title race a foregone conclusion. And although there was plenty of time to go in this one, the goal served only to disrupt the initial momentum and knock Rangers out of their stride. They didn’t recover it.

Initially, Rangers continues to press the visitors at the back, not affording them the opportunity to play out. But the game started to swing from end to end. After 17 minutes, Rogic played the ball wide for Jota. The Portuguese was policed superbly by Bassey, but on this occasion he dug out a dangerous cross that was headed over the crossbar by Goldson for a corner. Meanwhile, at the other end a sumptuous ball from Bassey picked out Aribo on the edge of the box but he had his pocket picked by Taylor.

After such a promising start, Rangers were becoming more ragged and on 25 minutes Giakoumakis sprung the offside trap. He was halted by Goldson, and Rogic spooned the loose ball over the crossbar.

This was the precursor for an error strewn period of play from both sides. A prime example of this was when Kent pressed high and harassed Hart into an error only for Rangers to surrender possession meekly from the resulting throw in.

There were some enterprising flashes from Rangers, but nine minutes shy of the interval, there was almost a second for the visitors. Juranovic played the ball through, and Maeda got the better of Tavernier only to be thwarted by a superbly timed diving save from McGregor. The ball broke to Rogic, but his shot was blocked by Bassey. And after Giakoumakis headed a Jota cross wide, a poor pass from Aribo presented Maeda with another chance but he was once again foiled by McGregor.

You had the feeling that Rangers had to hold firm until half time then regroup, but three minutes before the interval, they elected to defend less than diligently again. Lundstram became the first player booked for what looked like a robust but fair challenge, and from the free-kick the ball broke to Carter-Vickers who found the net.

Aside from the 700 visiting fans, the others in the 50,023 crowd were scratching their heads as they reflected on a first half that was like the curate’s egg, good in parts, bad in others. When Rangers were aggressive and on the front foot, they had posed problems, but dire defending had once again been their downfall. Arguably the biggest 45 minutes of the season lay ahead.

The start to the second half was delayed, though. It was unclear initially what Joe Hart was bringing to referee Willie Collum’s attention, but it some emerged that shards of broken glass were strewn around the penalty area at the Copland Road end. Launching a bottle onto the field was mindless and moronic, and when we also learned that one of the visitors’ staff members had also been struck by a bottle, the headlines were already written irrespective of the outcome.

With a winning position established, it was no surprise that the visitors sat deep at the start of the second half. It was down to an unchanged Rangers to break them down, but too often the pace became pedestrian. Kent had a couple of openings – firing a cross into Hart’s arms after 47 minutes and then dancing into the area a few minutes later only to have the ball taken off his toes by Taylor – and his ineffectual display was summed up after 55 minutes when he couldn’t bend a shot on target from the edge of the box.

The nerves were now creeping in, and that resulted in a series of unforced errors. There was restlessness in the stands too as the visitors made their intentions for the last half hour clear by withdrawing Hatate and Rogic and introducing Bitton and O’Reilly.

Rangers responded a few minutes later with double change of their own, but it was a perplexing one. Arfield and Sakala were the men thrust into the action, but not many present expected Ramsey and Jack to be the players to make way. Admittedly, Jack hadn’t been as influential as he has been lately, but Ramsey had posed more of a threat than the likes of Aribo and Kent.

With 20 minutes to go, Rangers were huffing and puffing but there was no sign that the visitors’ house was about to be blown down. Too often the home side were poor in possession, and when they did eventually make headway after 75 minutes, Hart was able to dive to his left to parry Sakala’s left foot shot. Roofe tried to gobble up the rebound but was flagged offside.

The visitors brought Abada and Turnbull for Jota and O’Reilly, and the former almost profited from a Tavernier error but shot wide. And as the grey skies started to gather around Ibrox, McGregor made a miraculous save to keep alive lingering hopes of a salvage mission. Once again, the opportunity came on the back of a Rangers error, Goldson’s loose pass, but McGregor managed to get his fingertips to Abada’s shot.

Time was running out for Rangers, yet there was no urgency in their play and their attacking forays lacked penetration. Roofe had a half chance with six minutes remaining but fired over the bar. And when a loose ball broke to Aribo, his shot summed up the day, it lacked conviction.

Usually when the fourth official hoists the board up and it shows there are five minutes to be added on there is a rousing roar. There wasn’t on this occasion. There was a feeling that this was just delaying the inevitable. Even moving Goldson to centre forward didn’t bring about a change in Rangers’ attacking fortunes.

When Willie Collum blew the final whistle, he didn’t just end the match, he pretty much signalled the end of this season’s title race. After a 12-point swing since the winter break, the deficit is now six points with six games remaining. The focus must therefore now shift to the other two trophies available, the Europa League and the Scottish Cup. But one can’t help but think that the ‘bread and butter’ that is the league title has been gift-wrapped for our Old Firm rivals this year. They have resolution and resolve, something Rangers are lacking, but we have still made careless mistakes that have handed this most lucrative of titles to them on the proverbial plate.

The quest for 56 may well be over, but on Thursday we go again as we try to salvage silverware from season 2021/22.