One For The Ages – Rangers v Dortmund 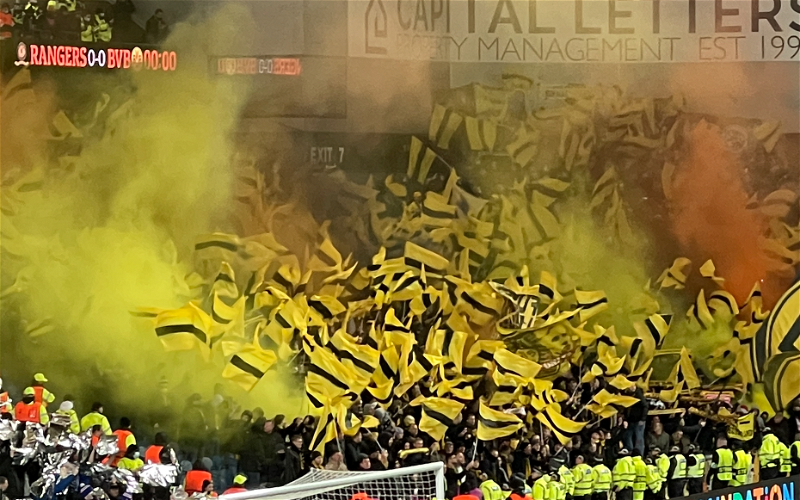 Never let it be said, that it’s dull being a Rangers fan.  In a week that’s seen the team drop further behind in the title race, after doing everything BUT score a winner at Tannadice on Sunday, the fans and the rest of Europe, for that matter have been stunned to see them batter SIX past Europa League tournament favourites, Borussia Dortmund and dump the German Giants out at the last 32 stage of the competition.  After last week’s heroics in Germany, we said that everyone would need to ‘do their bit’ to get this one over the line, and that’s exactly how it turned out.  The manager, players, fans and even the weather all stepped up to make this one of the truly memorable European Nights at Ibrox, as Rangers ran out deserved winners over the two legs.

Captain, James Tavernier was first to stick his head up when it mattered, for Rangers, scoring a brace as he led his team to a 2-2 draw on the night which was enough to see them progress 6-4 on aggregate.  Tavernier continues to defy logic, in an attacking sense for the club, scoring three goals in the tie and he couldn’t hide his delight, post-match.

‘It’s an amazing night for the club and the boys, especially after the pressure we were under first half.  We looked really aggressive and solid and were clinical when we went forward.  Dortmund are a great Club and it shows the character we have in the squad and we need to keep pushing each other.  We need to build on this now and make sure we take this into the league.’

Huge credit too, must go to Manager Giovanni Van Bronckhorst for a bold tactical switch, at half-time which swung the tie back in Rangers’ favour after it looked very much like Dortmund were in the ascendency.  After watching his team edge in front on the night and into cruise control in the tie, through Tavernier’s 20th minute penalty, Rangers seemed to lose their way and very quickly lost a huge chunk of their lead after some slackness in the centre of defence.  Van Bronckhorst didn’t hesitate.

‘It was one of the systems we have trained with the past days and I think it changed the game.  When we conceded the two goals, we had to be much more solid defensively and it allowed us to be ready for the big moments in the transition especially with Kent and Morelos who were very good.  Our mentality had to be right too though and I said before the game that we could make everyone proud within the beautiful club and I think we did that today.’

Gio, is ever the modest figure in these situations but, this decision to play five at the back in the second half, was crucial in getting the job done on the night.  For the fans, it looked very much like Rangers had shut up shop and were going to try and withstand a 45-minute barrage of pressure from a team sitting second in the Bundesliga.  The truth is, the formation and personnel LOOKED defensive but, the way it was executed was somewhat different and the switch was made with an attacking threat very much in mind. When they weren’t using the outstanding figures of Alfredo Morelos and Ryan Kent as ‘out’ balls, the extra cover at centre back allowed Rangers’ fullbacks, Tavernier and Bassey to edge that little bit further up the field and it was these pair who combined, as the latter’s cross went all the way across goal for the Captain to slam home from close range for his and Rangers’ second goal of the night.  Yes, second half display almost had an ‘away from home’ feel to it and from then on, Rangers were always the team that looked more likely.  Solid at the back and very dangerous on the counter Dortmund were a little fortunate, to come away with a draw in the end.  At one point the scoreboard read a quite incredible SEVEN goals in favour of Rangers (on aggregate) only for the referee to make a quite ridiculous U-turn on Ryan Kent’s tap in after consulting VAR.

Not even that could dampen the spirits of the Ibrox crowd though, which was quite simply, ROCKING.  Whenever supporters reminisce about the best ever European nights or victories, it’s the same games that crop up time after time. Juventus, Kiev, Leeds Utd, Parma, Marseille, Man Utd and PSV are never far away from the discussion and it’s fair to say, Borussia Dortmund 2022 will take its rightful place amongst those.  Even as I type this, I know people will disagree, it’s the nature of these debates and, I apologise in advance for not mentioning your favourite one but, what a fantastic debate to be having! It wasn’t so long ago, a packed Ibrox was watching the team struggle to draws with Stenhousemuir and Annan and here we are, surmising if Dortmund is worthy of making it onto our ‘best ever’ lists.  The magnitude of this victory, cannot be over-looked and as we wrote just 24 hours ago, a night like tonight against that sort of quality, gives credence to Rangers fans truly considering themselves back in the big time.  To a man, woman and child everyone inside Ibrox, stepped up tonight.  The energy from the stands was something special and the players responded in the best possible way, as the team marched through to the next round.  Can we as fans, dare to dream a little bit?  Possibly premature at this stage but, with every league game a ‘must win’ and yet another massive European tie to look forward to there really never is a dull moment being a Teddy Bear.