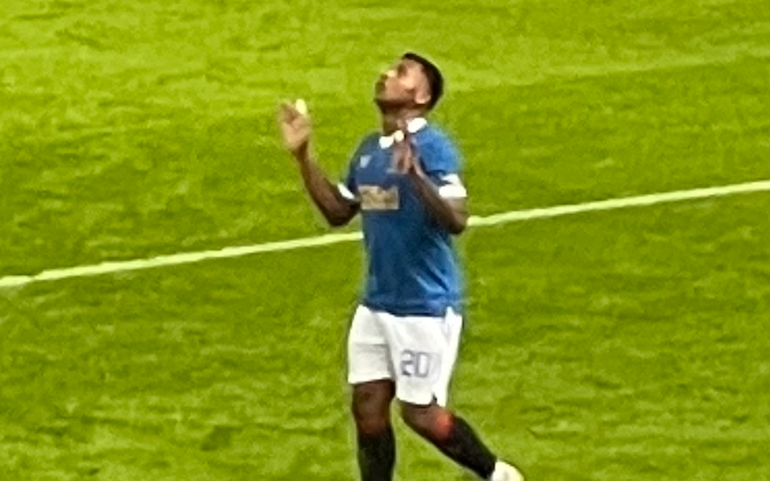 Having fallen spectacularly off the horse last midweek, the Rangers players most certainly got back on at the first opportunity at the weekend, blowing Hearts away on Sunday with a swashbuckling attacking display. However, it was imperative that they maintained that momentum when the Jambos’s Edinburgh rivals, Hibernian, came to Glasgow.

Given the majesty of the performance at the weekend it wasn’t surprising that there was only one change to starting XI and that change was enforced. The crude yet unpunished tackle from behind on Ryan Jack by Beni Baningime had resulted in Jack being pictured with a heavily strapped ankle. Although van Bronckhorst had intimated that it wasn’t likely to keep Jack out for a long spell, it was frustrating all the same given the positive impact he had had against Celtic and Hearts.

It was a landmark night for vice-captain, Connor Goldson. This was the Brummie’s 200th appearance for Rangers. He has missed just 10 games since joining from Brighton and Hove Albion in 2018, completing the full match in all bar one of his matches for the club. That was back on Boxing Day 2018 ironically against Hibernian, Goldson going off injured 61 minutes in a match that ended in a 1-1 draw. And although he has been subjected to criticism this season as his contract enters its final few months, his importance and influence on the team cannot be underestimated.

In contrast to the home side, Hibernian were struggling. They went into the winter break on the back of wins over Aberdeen and Dundee United, but since the resumption of action Shaun Maloney’s side had only picked up two points in the five league matches played. They had also required extra time to eliminate Cove Rangers from the Scottish Cup.

Evidently the players are still trying to get used to their new manager’s ideas and tactical philosophy. The loss of striker Martin Boyle hasn’t helped, and the former Celtic winger is tinkering with his team too, Maloney’s starting XI showing five changes from the side that lost 1-0 to St Mirren at Easter Road on Saturday. There was a return in goal for Matt Macey and starts for Josh Doig, Paul McGinn, Chris Cadden and Ewan Henderson.

Rangers got the match underway, and they got off to a flier. Attacking the Broomloan Road end and adopting the same shape as they had against Hearts – Kamara slotted in seamlessly alongside Lundstram – and buoyed by Sunday’s exploits, the home side had a noisy Ibrox crowd on their feet after just four minutes. Ryan Kent had another menacing match and when he jinked his way past McGinn, the Hibernian number six slid in and took the man and not the ball. It was a stonewall penalty. Up stepped James Tavernier and although he had missed his last attempt from 12 yards against Stirling Albion in the Scottish Cup, he made no mistake this time, ramming the ball straight down the middle.

It was the perfect start for Rangers, and they almost grabbed a quickfire second goal too. Tavernier was involved again, arcing in a sumptuous cross from the right, but Arfield side-footed his shot narrowly wide.

But before quarter of an hour had elapsed there was a blow for the home side. Leon Balogun, just back after missing 10 league games through injury, went down in the box and despite receiving treatment he was unable to continue. Borna Barisic came on, with Calvin Bassey reverting to centre back. The imminent return of Filip Helander may be a timeous one.

This was Barisic’s first outing since his horrendous performance at Parkhead and the Union Bears tried to give him a lift by giving a stirring rendition of the song the fans sing about the Croat. It may have had an initial impact, but as the half wore on you could sense that Barisic’s confidence was still fragile.

There followed a rather ragged spell of play that was punctuated by a number of fouls. Rangers had another penalty shout after 16 minutes when, following a neat interchange with Aribo, Kent appeared to be nudged in the back. On this occasion, referee Nick Walsh was not interested. It may have been on the soft side, but it was the first of a number of questionable decisions by the man in the middle.

Alfredo Morelos, magnificent at the weekend, looked set to continue from where he left off. He started the match by dropping deep and linking the play, and on one such occasion, he sprayed a superb pass wide to Kent. He teed up the Colombian for a shot at goal, but as the marksman took aim, he swung his right boot at the ball and missed, finding fresh air rather than the back of the net.

But this did not deter Morelos. A couple of minutes later he got another sight of goal, and it took a diving save from Matt Macey to parry away Morelos’s curling effort.

There was a different dimension to Morelos’s game in this one. So often criticised for dropping too deep latterly under Steven Gerrard, he did so to great effect against Hibernian. There is no doubt that working under van Bronckhorst and Roy Makaay in particular has elevated his game to another level. A successful and silver-laden end to the season may well hinge on El Buffalo maintaining this rich vein of form.

Although Rangers were on the front foot, pressing Hibernian’s defensive cocoon, the visitors did have one or two forays upfield. One of them yielded a half chance for Kevin Nisbet, who got in front of Bassey to turn a Doig cross towards goal. It didn’t trouble Allan McGregor, though, and that was the story of the night for the white-clad Rangers goalkeeper. He reacted well just shy of the half hour as the sleet and snow started to fall from the night sky, pawing away a free-kick from Doig. That aside he was rarely called into action, although he did make his customary couple of saves to ‘keep the zero’ late in the game.

Rangers hadn’t been seen in an attacking sense for a few minutes, so they set about rectifying this. Tavernier tugged a shot from distance wide after 33 minutes and a minute later Morelos should have done better than skew a left foot shot wide. A pass to Ryan Kent looked to be the better option in this circumstance.

The first half drew to a close with another couple of efforts – Kent stepping inside but firing wide before trying to beat Macey with a long-range shot that was easily dealt with – but one goal was all that separated the sides at the interval. In truth, though, Rangers were in complete control of the game and more goals were expected after the restart.

The opening gambit of the second half was full of huff and puff but nothing much to suggest that the Hibernian house would get blown down. Kent tried his best, cutting inside again only to see his shot deflected for a corner.

But the comfort of a second goal came after 57 minutes, and it was another blockbuster from Morelos. Tavernier was the architect, threading a superb ball through, and Morelos thundered it home with his right foot. It’s now seven goals in 10 league appearances under van Bronckhorst, and a second successive man-of-the-match award was richly deserved.

The noise around Ibrox was ear splitting. These two home fixtures were of paramount importance in terms of making a statement of intent in this tight title race and the fans showed their appreciation for the endeavours of their heroes.

The game looked to be petering out after the second goal went in. All the crowd of 49,700 seemed to be looking for was another sight of Aaron Ramsey. But before the Welshman arrived on the scene, Morelos and Tavernier were combining again, a surging run from the captain ending with another pass to his talismanic team mate although this time Macey was equal to the dinked effort from Morelos.

A double change swiftly followed, Arfield and Aribo going off, Ramsey and Fashion Jr coming on. Both Arfield and Aribo had put in good shifts, although the Nigerian hasn’t quite hit the heights he reached prior to the AFCON. Fatigue may be a factor in that, although Aribo a couple of notches below the level he was at before the winter break is still a pretty potent weapon in the Rangers arsenal.

As for Ramsey, there were some fleeting glimpses of what we can expect to see when he his match fitness improves. He almost got himself on the end of a ball into the box from Kent and shortly afterwards he glided forward effortlessly with the ball at his feet. That particular move ended with Morelos shooting for goal – his effort was deflected wide – before Kent shot across the face of goal.

It was another good night for the Englishman. He had been in the firing line as much as anyone after the defeat to Celtic, but he’s been more like himself, direct, tricky and full of running, since then. Long may that continue too.

Hibernian had a late flurry. McGregor parried a shot from Chris Cadden – he got in behind Barisic earning the Croatian an angry blast from his goalkeeper – and clawed away a shot from Sylvester Jasper. That meant Rangers ‘kept the zero’ and maintained the impressive statistic of not having conceded a goal in the nine matches played at Ibrox under Gio in all competitions.

The title race is hotting up, but it’s 11 days until the next instalment. In the meantime, there will be an opportunity to rotate the squad in the Scottish Cup against Annan Athletic and the small matter of a trip to Dortmund in the Europa League.

Rangers are back in the groove. The players have stood up and been counted, winning two tricky fixtures that tested their title mettle. Many may have expected a slip up or two, but seven goals scored, and none conceded is a statement that this squad of players has what it takes to tough it out at the top.

The quest for 56 continues.