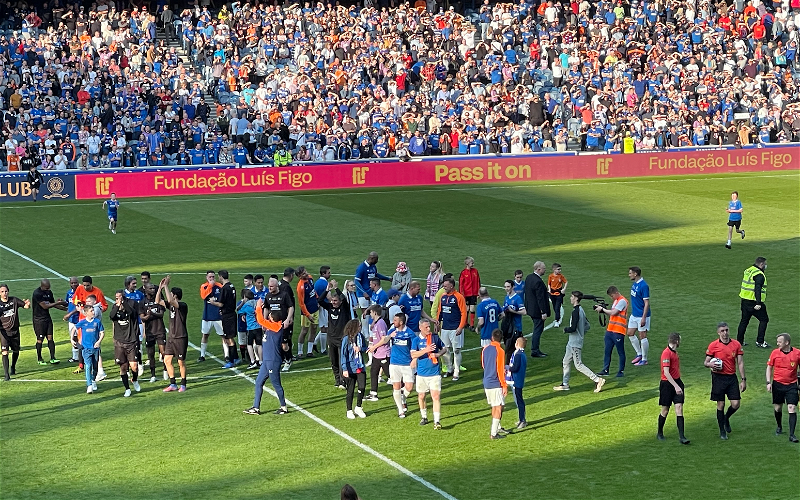 With the sun shining, it was the perfect Saturday to be outdoors and many fans took the opportunity to arrive at Ibrox early, with the club announcing that the fan village would be open 3 hours prior to kick off. This was the first of how well the day of celebrations would go, by 1 o’clock you would be struggling to find a space in front of the stage set up by the corner of the subway with thousands of fans spilled out over the front of the Copland Road Stand or Sandy Jardine Stand to get a glimpse of Callum Beattie’s set, which included a fantastic rendition of ‘Every Saturday We Follow’.

Two hours before kick off and already there was quite a unique buzz echoing around the stadium, if trying to best describe it would be hybrid of all the excitement and anticipation from an away day crossed with that relaxed content feeling that hits you as soon as you enter a festival arena during the day. A bizarre vibe for any game at Ibrox, but a welcome change for such an occasion that was thankfully carried on to the terraces.

The buzz continued with the announcement of the starting line ups with the Rangers Legends receiving the reception you’d expect, but more notably the crowed responded eagerly to the World XI line up beforehand. The opposition line ups are more often than not ignored, with the exception of a couple of times each year where it will be met with disdain, but no one can be blamed for applauding superstars such as Figo, Hagi and Kaka. With the crowd warmed up and the teams announced, Ibrox was ready for our legends to go toe to toe with some of the century’s greats. The teams lined up:

Straight away we seen the early front runners for who would steal the show, after all, winning the Champions League and holding your own amongst Europe’s elite brings a type of class that will never leave you – but more on de Boer later. Abidal and Quaresma causing Hutton bother time after time down the Rangers right, Figo and Kaka constantly finding space where no one else could and spreading the ball with ease. The constant interchanging, along with Quaresma and Hagi, seen them play a lot of their game around Rangers’ 18 yard line and manufacture chances leading to Waterreus come into action, as well as the post on two occasions.

But Rangers held their own in the first half too, with the current Rangers manager impressing in particular, paired in the midfield alongside Ferguson, Gio’s range of passing and vision moved the home side forward time after time and I dare say, had our strikers been a couple of years younger they would have reaped the rewards of the moves created from deep. An honourable mention goes also goes to Papac, playing in what became his secondary position at centre back, mopped up quite well behind Andrews and helped spray the easy balls towards the full backs to alleviate the pressure.

An element of personal bias here, but the aforementioned (and a certain fan’s boyhood hero) Ronald de Boer showed the finesse and technique that we all remember in the first half. Starting on the right but swapping wing periodically, de Boer still has that same magic talent of being able to turn and run past players without having pace, a skill incidentally Luis Figo used frequently in the second half. Eventually Rangers reaped the rewards from de Boer’s class as he picked the ball up on the touchline, half way in the opposition’s half, and executed an inch perfect cross which was met by the on running Arveladze who headed it sharply pas Lehman before running arms spread along the front of the Broomloan.

While the pace was naturally slower than what we’re accustomed to, the first half felt fairly competitive with only a handful of changes. Rangers Legends manager Alex McLeish and World XI captain Luis Figo spoke at the press conference of both teams keeping the professional spirit alive, with big Eck rightly pointing out the Rangers’ mission of keeping it tight at the back. Minor as it may be, it was endearing to see the competitive streak shine through in a friendly; Barry Ferguson still screams for every ball, and screams louder when he doesn’t get them; Marvin Andrews still fully commits both body and mind to every tackle, with Figo shaking off a limp here and there. Those of us who caught the fleeting moment where Gregory Vignal covered his mouth when passing a message on to van Bronckhorst would have laughed it off while admitting to themselves that this level of application to win a legends friendly is quite impressive.

The ref blew for the end of the first 40 minute half (yes, 80 minutes. Amateurs) and the centre circled was quickly taken over by the Glasgow three piece Saint Phnx. The band opened with their beautiful rendition of ‘Blue Sea of Ibrox’, taking the anthem to a lower pace which really embroiled the crowd into the chorus, before igniting the fire again with their hit single ‘Happy Place’. While the et was only 2 songs long, it was the perfect pass time for the break to bring on the second wind for the Ibrox energy levels as we headed into what would be as an electric second half as you’ll see in a friendly.

With Moore already replacing Vignal in the first half, Alex McCleish made a further 5 changes for the second half. Neil Alexander, Nikica Jelavic, Pedro Mendes, Nacho Novo and Rod Wallace all started the half for Rangers. Meanwhile Ricardo Costa, Nuno Gomes, David James, Christian Karembeu and Robert Pires were the 2nd half additions for the visitors, with Florent Malouda and Predrag Mijatovic haven already taken to the field during the first half.

Combined with Malouda’s pace on wide left, Figo and Kaka’s dominance across the centre of the pitch pinned Rangers back for large spells early in the second half, with Figo channelling his inner Ronald de Boer as he glided and turned passed players, moving into space with no real pace at all, all the while Kaka picked out pass after pass with ease, giving us all a throwback to his excellent display when his AC Milan side visited ibrox for a friendly. The equaliser would eventually arrive, and it was Kaka who was key. Picking the ball up on the edge of the box from a broken corner, Kaka twists his body and curls a right footed effort off the Rangers bar. As the Rangers legends try and scramble the ball away, the ball eventually makes it’s way back to the Brazilian who fires in a left footed cross which meets the head of Marchena, 1-1.

Not to be outdone, Luis Figo orchestrates a move less than 10 minutes later to put the World XI ahead. Driving the ball forward before playing it wide, the opposition captain recievs the ball back in the right hand corner of the Rangers box but picks out Nuno Gomes in space at the other side, who takes one touch to kill the ball dead and position his body before using his second to glide it past Alexander. Kaka capped off a fine performance by driving forward into the Rangers half, completing a one-two with Malouda before finding Quaresma at the far side of the box, who curls it pat Alexander with the outside of his right foot. Let’s not heap too much raise on the Portuguese winger just yet, providing he’s still signed with top flight side Vitoria. A ringer, some would say.

By this point Rangers had already seen the introduction of Michael Mols, Alex Rae and, to everyone’s surprise, Neil McCann who spent the first half in the RTV studio and was a late addition to the squad. However, the last change of the game brought the day to a wonderful close. Paul Gascoigne had already played his part in the celebrations, starting with his entrance into the stadium which mirrored when he first signed with the club, leading into his charming childlike humour from the bench. A standing ovation awaited Gazza as he replaces Michael Mols, an ovation littered with laughter as the midfielder pulled off his best attempt at ‘flossing’.

An even bigger applause erupted when Gazza received the ball from Pedro Mendes before quickly playing it back, a huge moment for the Rangers support as they see their flawed hero come back to play in the jersey once again. In true Gazza like fashion though, he feigns an off the ball dive seconds later to lighten the mood again. Gazza played his part in the final stages of the match, grabbing what may not be his finest goal at Ibrox to make it 2-3, but it will most certainly be memorable. Misplacing a shot in the World XI box, a soft ‘clearance’ from Marchena sees Gascoigne take a second chance on goal and his shot trickles past David James. Slight help from the opposition, but the photo of the World XI team joining the Rangers legends in congratulating the goal scorer tells you the magnitude of emotion within Ibrox witnessing Gazza take the field again.

A fitting end to a day of celebration. The day was never about the result, all that mattered was the occasion, the connections between players, managers and fans, the togetherness and the recognition of the size of Rangers as an institution. Gazza’s cameo felt fitting for the 150th anniversary of our club, a flawed individual who we have a connection with and who we encourage, support and cheer on towards recovery and rising again. You don’t have to look too far back to when our club and fans drove each other on to rise again, and it’s the collective connection that saved us then which we felt today. It’s that same bond and calling that we all share that will see Rangers into the next 150 years.