The Scottish footballing press – now and in the future 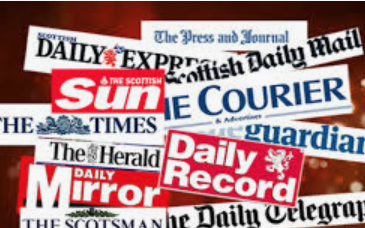 Since late May I’ve been photographing the football pages from Scottish papers and putting them up on the Follow Follow messageboard and Facebook site.  The record for one day was 73 images.

I’ve since settled into a routine of usually buying four dailies and taking pictures of the back pages and occasionally inside pages a of a few more up in the newsagents.

I think the images give a decent flavour of the daily press output.  It takes about an hour to photograph, edit and upload them each day.   The cost of the papers for the month of September was £146.56 – please feel free to correct my arithmetic!

I should note that for the first few weeks I was relying on a friendly news agent – but to be frank it was a bit uncomfortable denying him sales that I should have been making and getting in the way of his other customers as I sticky-fingered my way through his stock!  So I photograph a few papers and normally buy four a day.

At the weekends the cost of all papers rises and I also found myself following the demise of the Sunday Herald and the launch of the National and the Herald’s Sunday offerings.  Additionally, I wanted a close look at the weekend magazines of the Herald and Scotsman which both still retain great production values and often unusual and entertaining articles despite cost-cutting in both.

I should declare that I’ve always been a fan of newspapers – our home was an Evening Citizen household before that great paper folded – thereafter my dad would bring home the Evening Times and the Daily Record, my mum the Daily Express.  For most of the late 80s and 90s I was buying five papers  a day – the Herald, Scotsman, Record, Sun and Irish Times.

Many people now get all their news from the TV or online and papers sales have declined but they still remain important. 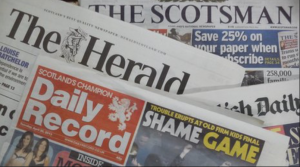 WHY DO PAPERS STILL MATTER?

With some ‘tricky’ stories we ardent internet users can be 72 hours ahead of the papers on certain stories.    We can cut and paste – they have to get them past editors, sub-editors and legal teams.

However, be in no doubt that the working day of every news office – internet, TV or radio – starts with going over the papers.   Papers are still more often than not the source which sets the news agenda.  Papers are less regulated than TV or radio – they can be more biased and reckless in their treatment of stories.  Their presence in offices and shops – spare copies lying around, billboards, etc – mean that they influence millions of us whether we buy them or not.

In Lanarkshire, for instance, the Daily Record advertising people can put together a package between their various national papers, their online presence, local weekly papers they own and deals with local radio to give an 85% penetration of the market.  Their brands are now online brands as much as newspaper titles.

There’s no doubt papers have dropped in influence and the lack of resources now sees many very dependent on news conferences and press releases for content rather than individual journalists breaking stories.   Staff numbers have been cut so that often journalists imply don’t leave the office – some online staff have to produce between 8 and 10 stories a day – hence sensationalism and cut and paste jobs from social media lunacy are the order of the day on many news websites.

The Express, Star and Record and now owned by the same company – moving into the same offices and journalist numbers being cut – in the last few weeks copy from Record journalists like Craig Swann and Gary Ralston has started appearing in both the Express and Star (coverage from Ufa for instance) simply because they don’t have the resources to send their own people.

The Express and Star do retain their own identities and staff (I really like the style of the Star) but I fully expect them to end up with a couple fo freelancers producing their unique content and have the rest lifted and re-designed from the Record.

SOMETHING FOR THE WEEKEND

The cost of papers are the weekend shoots up – those supplements are not free!   The Saturday and Sunday editions tend to be treated like flagships and extra resources are given to them – I’m not sure how long that can continue – the Saturday magazines of the Herald and Scotsman are like something from another world in terms of the design, photography and effort.  With their circulations how long can that continue?

Reporting now shows you how dependent the papers are on the post-match quotes from players and management – old-style match reports are largely redundant in an age where anyone who wants to will have seen the match live or highlights (legal or illegal) several times by the time they get a paper.

WHY I SETTLED ON BUYING FOUR DAILY PAPERS

After a few weeks of buying and reading the papers I began to think “If i had buy just one of these which would it be?”  Probably for volume of material it would be the Record.  For a combination of volume and lack of anti-bias it would be the Evening Times.  For putting online I think the four dailies I have chosen cover most of the current topics pretty well.  I still do take time to flick through the other papers in the shop and photo what I think might appeal or simply to give  flavour of the coverage.

When you think of what has happened to this once grand old champion of the West of Scotland working class it would make you weep.   It now seems to have the vulgar and lumpen as it’s target audience and can’t quite make its mind up whether to be honest in its Unionism or to continue to pander to the shrieking hatred of the Yessers.

On the sports desk it has the largest team of journalists available with about eight of them covering  football – its just a bit odd that head honcho Keith Jackson now never actually goes to games.  In any other paper this would be a problem!

The Record’s Hotline is a daily source of both dread and amusement – sadly, I think most of the contributions from punters are genuine.

For sheer volume of coverage the Record is a first stop.

As a Rangers or Celtic fan you can guarantee at least two pages of coverage of your team every day in the Evening Times.  Usually four pages most days as columnists like Lee McCulloch or Derek Johnstone fire in.  The Evening Times style is both partisan and non-controversial – it provides an easy read – a comfortable service to their readers.  A celtic fan like their Rangers stuff?  Well, you won’t be offended by the Celtic coverage, and vice-versa.   It’s very clear commitment to serving the fans of both clubs and the ‘house style’ of the paper means the journalists can go both in-depth to some issues and pander to the taste of their readers on occasion.

They’ve got a smaller sports team than the Record but the quality can be good – but with a proviso.  The bias of three of their leading journos – McGowan, McGarry and Greechan – are such that you often have to read between the lines on certain subjects of interest to Old Firm fans.  Yet, all three can often surprise you with the slant they take on issues and there are days when there is no old Firm coverage as they are actually all out and about providing a service looking at what is going on with the other clubs in Scotland.

One of the few papers left where individual journos are given the time and space to develop ideas in long single-issue articles.

It’s now the biggest selling paper in Scotland yet I’ve hated the layout of the sports pages for 20+ years!  It has always seemed dark and cramped.  Between them Andy Devlin, Roger Hannah and Robert Grieve probably break more genuine exclusives than the rest of the press pack combined.  Amid that coverage it never fails to amaze me that they continue to publish the tedious tripe Bill Leckie has churned out for 20 years – initially Leckie was producing good stuff but fell into bad habits and can’t raise his game above a diet of ‘ah support a wee club, we’re real fans and God bless the Tartan Army – as my old granny used to say, it’s like a gramophone with a bump in it.

THE LACK OF DIVERSITY

Perhaps it’s my memory playing tricks on me – but you now have a far less diverse sporting press – fewer genuine stories being broken as clubs like to keep content for their own websites.  A heavy reliance on press conference quotes – during the recent international break there appear to have been some days when the SFA and Scotland sponsors had four players or ex-players giving quotes on the same day – and the same after-after-match quotes.

Days can go by with virtually the same content across all the papers – the easy to do stories.  Probably a combination of lack of bodies and money has killed a lot of that.  Yet, even genuinely exclusive transfer stories are now few and far between.

Simply photographing the papers is obviously not real journalism – but it does provide a service to our punters – many of whom have now gone nearly 20 years without buying a paper.  It gives a flavour of what is being produced and the number of threads on all message boards and social media outlets tells you fans both have and insatiable thirst for news about their clubs and that they will take that news from wherever they find it.  Could you do without it?

As an experiment I was in Northern Ireland the other week – no overnight stay or meals but yet the flights, train/bus tickets and airport car parking came to £126.44 for the day.  I produced four shortish videos ahead of the Rangers XI playing Larne and stuck them up on The Gers TV as an experiment.

If I had needed an overnight stay plus meals etc it would have easily broken £200 – so I can understand why lots of sports desk opt for the easy and cheap option of employing journalists who rarely leave their desks.  But how are these guys ever going to produce a rich and varied output of genuinely new content? 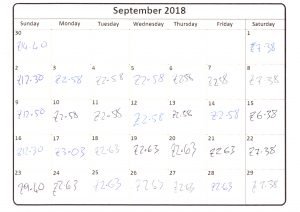 Fans who know where to look can find most of the newspaper content and live games for free online.  If they don’t find it on their usual websites they just search elsewhere.   That’s the funding problem newspapers and TV stations will continue to struggle with.  Can you live without it?

Are people prepared to pay?

I’m going to run a trial over the next month and see if punters care enough about the papers to contribute to the cost of buying them.  You can see, from the expenses sheet I’ve published, the costs involved.  I’ve no idea what the response will be but I’ll report back!   The cost of the papers for the month of September was £146.56.  Over the course of a month it’s about £4.88 a day.   The four tabloids cost £2.63 on a weekday.  You might consider it as a sponsorship.  Paypal links are below.