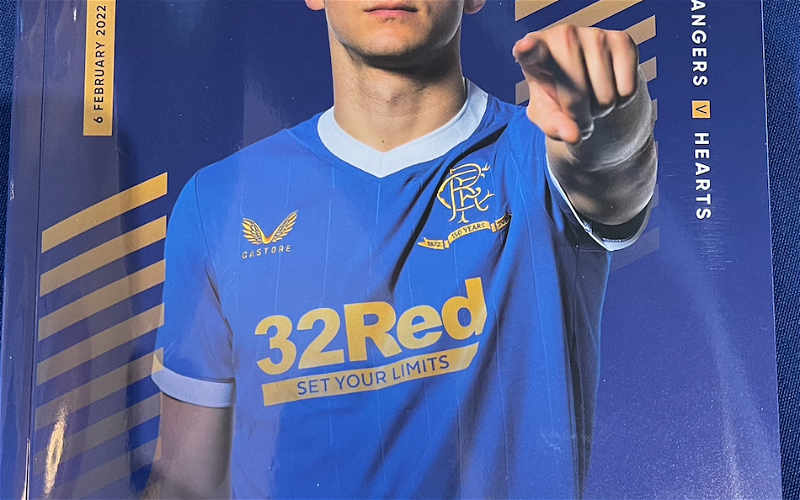 New boy, Aaron Ramsey spoke of the ‘excitement’ at making his debut for the Club as Rangers destroyed Hearts 5-0 at Ibrox yesterday afternoon.  Sent out to warm-up with the score at 2-0, Ramsey’s role became more of a cameo, by the time he actually made it onto the pitch as quick-fire goals from fellow substitute Glenn Kamara and the tireless Scott Arfield ended the match as a contest, before his introduction on the 76th minute.  Ramsey had just witnessed the Dr Jekyll side of his new team, following Wednesday night’s Mr Hyde horror show at Parkhead and he admitted he can’t wait to make his mark in his new surroundings as he confidently played out the final 15 minutes of the game.  In truth, it’s hard to judge a player coming into a match where all the hard work has essentially been done but, Ramsey’s attitude and application to the task in hand, will please the Rangers fans, many of whom are still a little bemused at how the Club managed to secure the services of a player of such standing and stature within the game.

‘I’m always excited to get on but, I was itching today because I haven’t played a lot of football since November.  When I was warming up, I kept looking over and eventually I got the nod.  I’m just really happy to make my debut and in that atmosphere, it was brilliant.’

The Rangers players, still smarting from a first league defeat to Celtic in over two years, knew victory today wasn’t enough.  The fans, manager, even themselves demanded more than that and, after today’s attacking masterclass from Joe Aribo and Scott Arfield, assisted brilliantly from Ryan Jack and John Lundstram, Ramsey is very much looking forward to the challenge of fighting his way into the Rangers starting XI and playing a starring role in the Club’s bid to retain the title.

‘We needed to show a reaction today and in think we did that.  These (bad) results sometimes happen but, it was important for us to get going from the off and I think we did that in terms of making tackles and creating chances. I think that needs to be the benchmark now. I already know about the quality of this team.  I know a few of the lads already from Arsenal and from playing in the Premier league.  We have a lot of strength in depth and that’s important to push each other.’

For many, it was a surreal moment but, for Ramsey himself this is very much a two-way street and he made it very clear that the hard work starts now and his motives for joining the club.

‘There’s a lot of pressure on the players, it’s a massive football club and fan base and that’s why I came here, to challenge for titles.  It doesn’t surprise me that the fans want you to be on the front foot and scoring as many goals as possible.  This is Rangers and this is the way we need to be. There is a lot of talent in this team and we showed that few times today scoring some brilliant goals so hopefully I can fit into this team and show what I can do.’

As for Giovanni Van Bronckhorst, he could hardly have asked for a better end, to what has been an extremely difficult week. Two points thrown away at Ross County, before Wednesday’s capitulation to new league leaders Celtic, saw many clamouring for whole-sale changes, including Ramsey starting the match but, Gio ever the pragmatist, made it clear that he will be needed for the ‘end game’ and asked for supporters to be patient.

‘It’s about finding a balance.   We know what he can bring but, his rhythm of play isn’t quite where we want it to be just now.  You see his quality and the way he trains and of course his level will go up the more minutes he plays but we have to look at his physical presence.  We know what he can bring to the team but we also make sure we build him up and get him physically ready.  It’s very important for him to train every session because for the last month and half he has been training by himself.’

For Rangers, today was as much about character as it was about the result.  The players and manager have received huge criticism (some just justified, some not), with many fans wondering if this squad still had enough fight in them to retain their title but, it’s fair to say they went some way to answering their critics and maybe even learned a thing or two about themselves in the process.  This wasn’t just a much-needed victory, it was an annihilation as Rangers roared out of the traps and set about righting the wrongs of the past week.  They came out like caged animals and the Ibrox crowd, who seemed a little nervous in the build-up, responded in kind.  For GvB it’s no time to get carried away however.

‘We had a very important debrief from the game on Wednesday.  How we played physically, tactically and mentally we just didn’t tick the boxes but, today we did.  It has been a big wake-up call for the team and we have reacted today and now we need to reach that level for every game.  The pressure was on us because of the way we performed but, not only for the team but, for myself and my staff.  We knew the fans were very disappointed but, once we showed the right attitude, energy and pressing you know they are going to back you.  We know our task is not done yet, this is game is done now and we look forward to Wednesday.  You could sense that in the locker room. We are happy with the result but the focus with the players is already on Hibs.’