Goodwin to stay on at Aberdeen

So he's gone if he loses to Hibs?

“We all recognise that Monday’s disastrous result in the Scottish Cup was totally unacceptable. It added insult to injury after such a poor result against Hearts, following what was a strong performance in the semi-final against Rangers at Hampden.

“The football monitoring board, comprising Stewart Milne, Willie Garner, Steven Gunn and me, have now had a full and frank meeting with Jim. It wasn’t an easy conversation, but necessary after the overall poor results since the World Cup break.

“From our wider discussions over the last two days, we believe that the senior players and the squad are behind the manager. Combined with our discussions at today’s meeting, Jim will be in the dug-out on Saturday. However, to be clear, Jim has been left in no doubt that the Board and the fans are seeking an immediate response from him and the players.”

Sounds like if they get beat at the weekend then some sandcastles are getting knocked over.

I think Goodwin is a decent manager.

He has proven that at previous clubs.

Surprised he has survived this though.

Official Ticketer
Tbf what’s the point in sacking him. The team is full of absolute diddies.
P

Sheep Assemble riots outside Shitodrie .Not.

I hope he stays, I have the fear that’s he’s sacked and replaced with Lennon. Don’t want that rat anywhere near Scottish football again.

Unlikely to go down well with their scummy fans which is nice.

zecchinetta said:
Haha. AFC chat will be fun. Back in a sec...
Click to expand...

Looks like their ITK are as accurate as ours lol 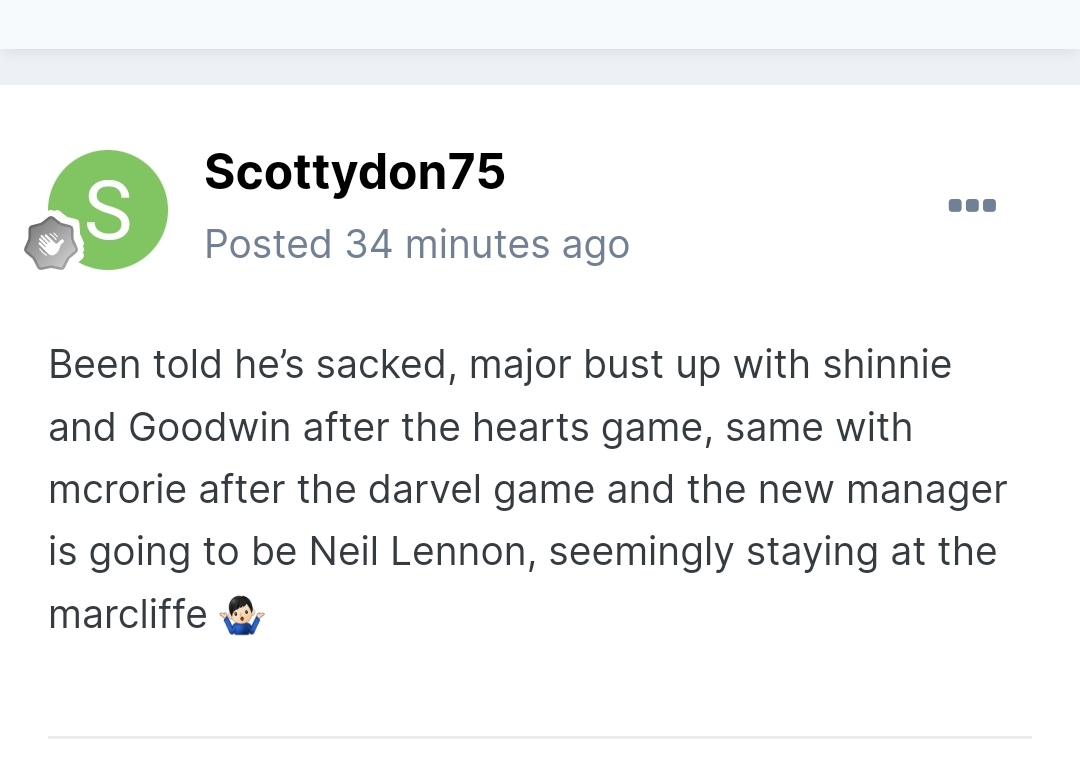 Quite a statement, he will be gone soon.

True Blue said:
Unlikely to go down well with their scummy fans which is nice.
Click to expand...

I've just had a look on their forum. Seethe doesn't cover it.

Official Ticketer
Placed him on the naughty step

There's a bampot in the comments section thinks the game up here is corrupted because of Rangers' influence.

They truly are beyond help.

So sacked on Saturday then. What's the point in fannying about

Jim Goodwin. If ever someone had an ironic name.

I’m reading it as him having to beat Hibs on Saturday to keep his job.

zecchinetta said:
Looks like their ITK are as accurate as ours lol


either that or Lennon raided the minibar and is on a bender in sheep land!

ICA_86 said:
I’m reading it as him having to beat Hibs on Saturday to keep his job.
Click to expand...

And the Hibs manager needs to win to save his.

Could be the first game in history where both sets of fans want their team to lose.

The scummy sheep supporters will be out on mass all 5 of them will be out demonstrating and banging down the main door. Ha ha

Reads....can't afford to sack him

they do not have any money to sack and replace him?

club175 said:
Tbf what’s the point in sacking him. The team is full of absolute diddies.
Click to expand...

So why have they been within three minutes of beating us a month ago and holding us to a draw over 90 minutes at Hampden just the other week?

See this, 'they only raise their game' stuff, it doesn't hold water with this present batch of dung.

Played well against us though, so it's all good!

“The football monitoring board, comprising Stewart Milne, Willie Garner, Steven Gunn and me”… and me!? What kind of Sheep’s English is that?

If you need to release a statement like that about your manager then you should be sacking your manager.

zecchinetta said:
Looks like their ITK are as accurate as ours lol

Is Lennon staying there or was it just a ginger tramp rummaging through the bins outside he was mistaken for?

SuffolkGer said:
Is Lennon staying there or was it just a ginger tramp rummaging through the bins outside he was mistaken for?
Click to expand...

He's crowned himself the Jake in the North