Half a revolution is no solution 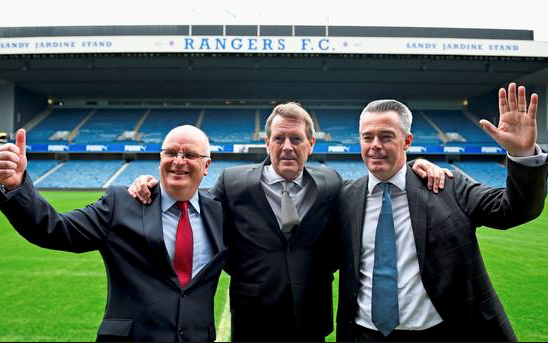 It’s over three years since the good guys won the battle for control of Rangers.  Overwhelmingly this has been good news – initially getting the club out of the hands of the Spivs, and secondly a fantastic victory in getting the club out of a ridiculous contract essentially handing a vast percentage of our future income to Mike Ashley.

However, it would be foolish to ignore as irrelevant the down-sides to control by the current board as we approach the coming season with our third manager in three years – or fourth if you count Graeme Murty’s extended spell as caretaker.

Off the field of play we’ve seen a similar, although far less-publicised, soap opera of incompetence and missed chances.  The club simply hasn’t invested strongly enough in the right sort of people for the job; tolerated the presence of Spivite hangers-on within the club and failed to develop any sort of plan for taking on the enemies of the club in a systematic way.

There was, of course, a massive job to be done – years of neglect in the second part of the Murray Years followed by a seemingly endless parade of crooks and spivs once Craig Whyte entered the stage.  We weren’t expecting perfection or instant results during the turn-around but some of the mistakes made have been breath-taking.  However, we all knew there would be tough times and plans should have been made accordingly to tackle certain areas.  The idea that you cannot tackle umpteen different tasks concurrently is nothing more than an excuse.

The sudden conversion to the playing of hardball with the SFA in recent weeks has been welcome.   But puzzling it has taken a group of men so used to the rough and tumble of business life to realise what we’re up against with the Scottish football authorities.

There comes a time when the excuses have to stop.

Policies and people – any organisation must invest in both.  My complaint is that we’ve not had enough of either.   There’s been far too much playing it off the cuff.  There has been no concentrated building of bridges, in Paul Murray’s much-maligned term.

We should have rallied the friends of our club in the football world, and those decent in other clubs, with a plan of action to bring competence and fair play to the governing bodies.  Instead we loan players to the likes of Alloa!  Talk about lack of joined up thinking!

In the commercial, communications and chief executive roles we have failed badly – and we’ll examine those in other articles later this week.   Rangers have been characterised by un-coordinated and confusing actions.  The board failed to take the opportunities offered by overwhelming goodwill to channel enthusiasm into a crusade – as a result a lot of that goodwill amongst fans has been frittered away and simply isn’t coming back.  We’ve been let down too often.  Executive recruitment has been unimpressive at the top level and at the lower levels incompetent in many cases.

Time without number across a variety of fields you’ve heard the lament that things had been agreed with the club but there was no follow through and no implementation.  It’s almost has though they expected a return, as if by magic, to the good old days when the club provided a Rolls Royce service.

One  of the main problems has been the lack of a figurehead – Dave King is not in the country often enough and Stewart Robertson gives an impression of a frightened rabbit whenever a camera or microphone is placed in front of him.  Leaders need to lead.

During the campaigning to get rid of the old board Dave would agree things and then go silent for weeks and weeks on end only to resurface with some garbled seven or eight page statement you’d need a degree in Sanskrit to decipher!  Without an active leadership setting the agenda and then encouraging the punters to follow we’re always going to be second to the ball in many areas.

We should have been building up our own media within the club – giving the current outlets we have a cutting edge and letting the talent we do have run free.  Then we should be experimenting with the new outlets technology provides us with.  We need a massive overhaul off the pitch.

We need a clear-out across a range of departments and roles.  There can be no excuses – if you want to re-cycle apologia then we’ll never make progress.   Now is never the right time – that’s always the cry of those with self-interest.  It’s the cry of those who regard themselves as indispensable when all the evidence points to them not doing their jobs.

If we want to move the climb forward at a rate of knots to take the opportunities on and off the field the financial stabilisation of the club and the Hollywood-style appointment of Steven Gerrard presents us with then we have to make the same kind of sweeping changes off the field as we have done with the management and coaching staff.