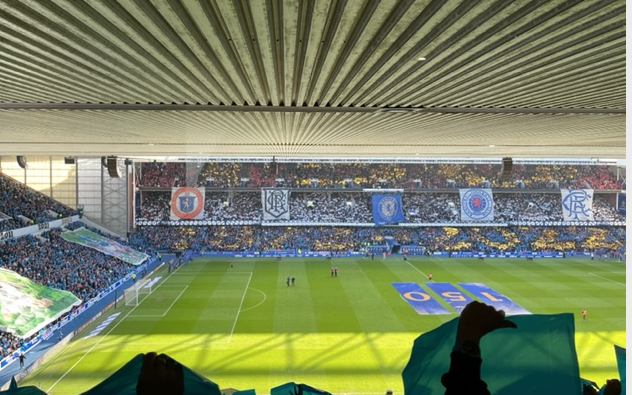 Kemar Roofe was the hero as Rangers celebrated their 150th Anniversary with a nervy 1-0 win over Aberdeen at Ibrox.

Having drawn the last two encounters, the opposition once again raised their game against the champions but to no avail this time.

The first half was a dull affair, with both sides not able to create a clear-cut chance.

Rangers had a couple of decent moments, more so in the 32nd minute after a short Barisic corner fell to Glen Kamara who cut inside but his shot was deflected wide. This was after an earlier chance that Fashion Sakala skied over the bar.

The champions picked up the intensity in the second half and Sakala was again the most potent attacking option.

The Zambian squandered two chances in as many minutes, firstly when he fired over the bar from a Joe Aribo knock down and then a minute later when he headed the side netting from a Barisic cross.

He was subbed for Arfield in the 59th minute along with Borna Barisic who was replaced by Balogun with Bassey moving to left back.

Rangers continued to push for a winner with Ryan Jack having the game’s first shot on target in the 71st minute, but it was a comfortable stop for Lewis in the Aberdeen goal.

Lundstram and Roofe came on to offer a more attacking threat, and it was nearly rewarded straight away when a chance dropped to Arfield but his shot was blocked.

The pressure finally paid off when the substitute Roofe pounced on the ball during a scramble in the box and fired Rangers in front in the 81st minute.

An additional five minutes were added on in injury time, but Aberdeen offered no attacking threat as Rangers celebrated their 150th anniversary in style – moving level on points with Celtic at the top of the table.

Up next for the champions is a home tie in the Last 16 of the Europa League against Red Star Belgrade before returning to league action next Sunday away at Dundee.